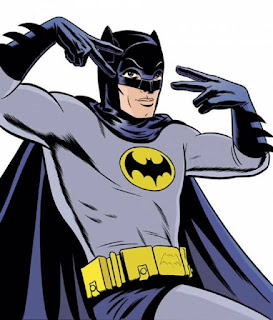 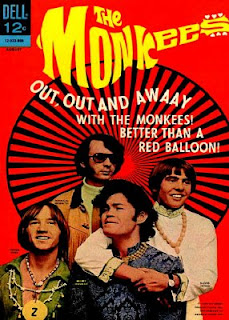 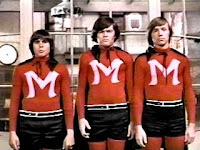 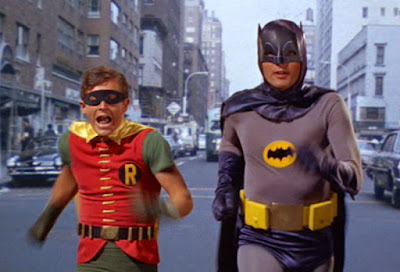 The fab comics blog 13th Dimension reports that DC Comics will soon be ending its Batman '66 line, a series of comics based on the continuity of the campy 1966-68 Batman TV series. The ongoing Batman '66 was cancelled some time back, but has continued in several separate crossover mini-series, in which our intrepid Dynamic Duo and friends (and foes) have crossed paths with The Green Hornet and Kato, Napoleon Solo and Ilya Kuryakin from The Man From U.N.C.L.E., John Steed and Emma Peel from the classic British show The Avengers, and the currently-running Batman '66 Meets Wonder Woman '77, teaming TV's Caped Crusaders with Lynda Carter's Amazon Princess. Batman '66 will conclude this summer with a one-shot guest-starring The Legion of Super-Heroes. 13th Dimension further notes that one more unidentified Batman '66 crossover is rumored to follow, but otherwise Batman '66 is being terminated. Holy Kevorkian! 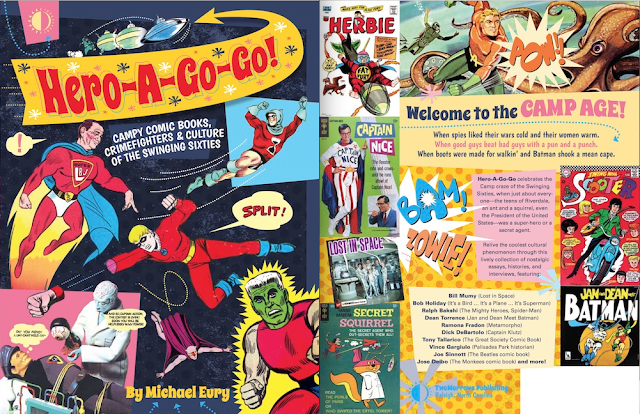 I wasn't aware of Batman '66's impending conclusion when I started writing today's post. My original intent was to follow up on a different 13th Dimension entry, regarding The Monkees in comic books.13th Dimension has been promoting Michael Eury's forthcoming book Hero-A-Go-Go (a book which you can order here, like I did), and recently reproduced a Monkees entry from Eury's book. And that got me thinking once again about a comic book that will likely never be: Batman '66 Meets The Monkees.

There has never been any announcement, nor even a strong rumor, of a Batman-Monkees crossover comic book. That mundane reality hasn't stopped a few of us from wishin' and hopin' like dear Dusty Springfield, speculating on the possibility of The Batcave coming to The Monkees' beach pad. The notion wasn't necessarily all that far-fetched. Both TV series celebrated high-profile 50th anniversaries last year: the Batman series was officially released on home video for the first time, and its stars Adam West and Burt Ward (along with Julie Newmar, aka Catwoman) returned to their former roles in a new animated feature; the surviving members of The Monkees--Micky Dolenz, Peter Tork, and Michael Nesmith (Davy Jones passed away in 2012)--reunited for a concert tour and a critically-acclaimed, best-selling new album, Good Times! Further enhancing the possibility was the fact that both DC Comics and Rhino Records (which owns The Monkees' trademarks) are subsidiaries of the vast Time Warner media empire. If Disney owned either of 'em, it would have been a pipe dream. But no--it was a little far-fetched, maybe, but it was potentially plausible.

And man, I wanted to be the one to write it.

This desire, of course, moves from fanboy fantasy into the realm of outright delusion. I have no professional contact or professional experience with DC Comics, nor with any other comic book publisher. My sole experience with Rhino was a one-off work-for-hire liner notes gig in the '90s, and Warner once hired me to write an artist bio of Joan Jett. None of this presents a sufficiently relevant resume to actually snag the assignment. Furthermore, there's nothing in my background to indicate I'm capable of pulling it off creatively; I've never done anything like it before. Closest I've come is a Batman story, The Undersea World Of Mr. Freeze, which I wrote for this blog last year. I'm not qualified. Hell, I wouldn't hire me for the job.

If I were writing a Batman-Monkees book, what elements would I want to include? We presume it should be a meeting of the TV Batman and the TV Monkees, rather than some more serious iteration of the dread avenger The Batman and the real group that The Monkees became. I think that's best, at least initially; however, if the story were designed to be a mini-series instead of a one-shot, I actually would want to mix different subsequent interpretations of the characters into the narrative, with, say, the '70s Denny O'Neil and Neal Adams Batman and the jaded Monkees from the film Head, or even Frank Miller's near-fascist Dark Knight and the 1986 MTV Monkees, interacting with their cathode-ray '60s counterparts in a mad, hallucinogenic trans-dimensional romp, fueled perhaps by the insane, evil machinations of The Joker and Monkees villain Wizard Glick. And, y'know, Frodis, man. But the TV versions would remain the story's central protagonists. 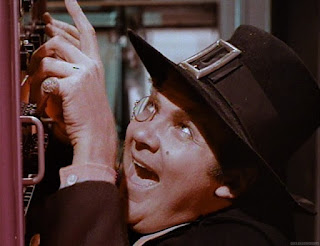 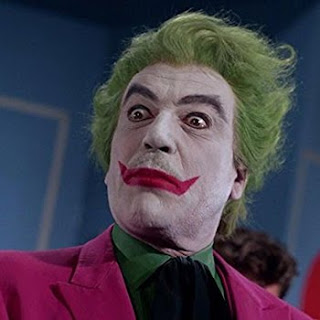 The Penguin and Oraculo should be among the story's heavies. This is a matter of convenience, following a wispy thread of established continuity. TV's Penguin Burgess Meredith appeared--for all intents and purposes in character as The Penguin--on The Monkees, in the 1968 episode "The Monkees Blow Their Minds." The Penguin didn't participate in the plot of that episode--he just sat at a table, cackling his Penguin cackle, in a club where the mentalist Oraculo was performing. But what was he doing there? Does The Penguin know Oraculo? Is this waddling felon merely a big fan of hypnotists' acts, or are he and Oraculo about to collaborate on something devious and diabolical? There's a story there. Somewhere. 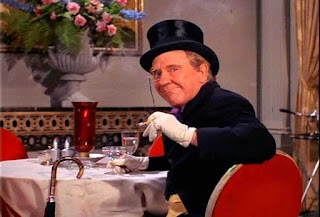 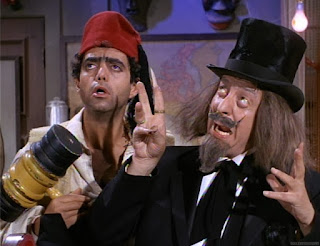 Batman '66 Meets The Monkees would also need to use Catwoman, as well as her doppelganger, April Conquest, the girl with whom each of The Monkees yearned to hold hands and walk along the sand. Both roles were played on TV by Julie Newmar. The identical physical appearances of Catwoman and April could serve as a catalyst for intrigue and adventure; Catwoman has already been involved with crimes against a pop group (she stole Chad & Jeremy's voices on a Batman two-parter), though I betcha our fickle April will wind up on the arm of Robin the Boy Wonder. 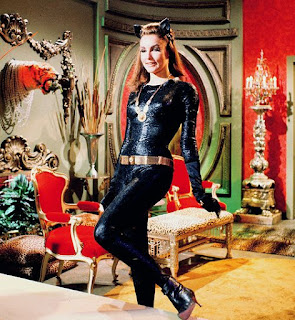 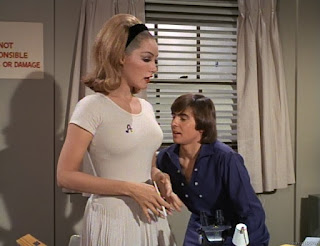 Ideally, a crossover story like this should include as much as can be used effectively from both series' continuities. Commissioner Gordon should meet The Monkees' landlord, Mr. Babbitt. Bruce Wayne's butler Alfred may know Davy Jones' grandfather from a shared youth in England. Batgirl, The Purple Flower Gang, Aunt Harriet, Milly Rudnick, The Riddler, and Mr. Scratch (The Devil himself!) are all fair game. Batman and Robin should pursue a lead that brings them to The Monkees' West Coast milieu, and The Monkees should likewise find themselves in Gotham City pursuing stardom (or even just a job). And Bruce Wayne, in his capacity as a major stockholder in the Eden Records label, could be looking for groups to sign and possibly tour with Eden's biggest act, British superstars The Oliver Twists; The Foreign Agents, The Jolly Green Giants, The Four Martians, The West Minstrel Abbies, and even Honey And The Bear could compete for the prize, but The Monkees would win in the end. (Or near the end; it would turn out that The Monkees are ineligible because of a previous contract with TV producer Hubbell Benson, forcing Eden to withdraw the offer, and The Monkees to return to toiling in obscurity. That's show biz, Batfans!)

If you're a pop culture enthusiast who might be interested in a mashup of Batman and The Monkees, but not enough of a hardcore fan to prevent you from scratching your head at the obscure references listed above, well, the writer's job is to make you care about 'em anyway. In a successful story, the Easter eggs for true believers should also become integral parts of the tale being told. New characters become old friends.

Ideas are easy. Whether a concept succeeds or goes biff-bam-splatt! depends on execution. Even if I were magically granted a chance to write a project like Batman '66 Meets The Monkees, I can't say I'd be capable of doing it. It would be fun to try. Failing that, it would be fun to see someone else try. I wanna read this story! I wanna see The Joker's moll Susie get all starry-eyed over Davy Jones (and, of course, our Davy will tell Susie's boss, "You must be joking!"). I wanna see MonkeeMen fight alongside the Caped Crusaders, Two-Face's scarred visage frightening poor Peter Tork (causing a concerned Mike Nesmith to scold Two-Face, "Don't do that."), and Micky Dolenz matching strategic wit and scientific invention with Mr. Freeze. I want to read all of this. Since I can't, however, I guess I'll just have to imagine it instead.

And Holy Norman Rockwell! Whatever chump or champ were tapped to write this, wouldn't you love to see it rendered by artist (and Monkees fan) Alex Ross?

But alas, it is not to be. Not in this generation, nor in this loving Bat-time, or same loving Bat-channel. But I'd buy it. I bet you would, too. 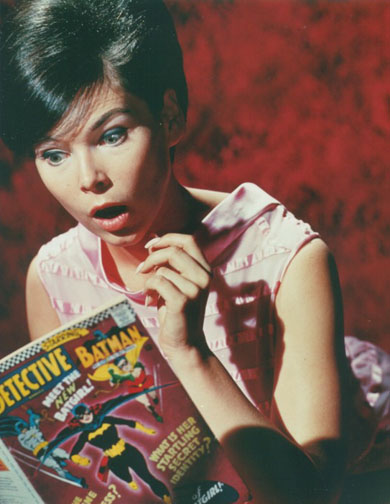 You can support this blog by becoming a patron on Patreon: Fund me, baby!
Posted by Carl Cafarelli at 9:55 AM