THE GREATEST RECORD EVER MADE: "Baby Blue" 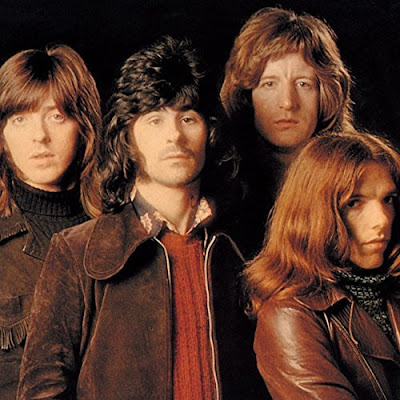 When I was a teenager, AM radio was both a tether to the real world and a pipeline to an imagined (if not quite imaginary) world of awe and wonder. In Syracuse, in the early- to mid-'70s, WOLF and WNDR supplied the hooks and the hype, the very foundation of my formative rock 'n' roll dreams. Every new song was a potential revelation. Every new record was a new possibility.

My daughter tells me how much this has changed; she loves music as much as I do, but radio has become irrelevant. It's still on in the car sometimes, when the iPod's not available, but it's background noise, a gray haze of commercials and forgettable music, punctuated occasionally (if at all) by something decent to listen to, briefly. Neither she nor her friends ever listen to radio at home; why would they? There's nothing for them. There's nothing for me. I can rarely tolerate listening to any commercial radio station for long, and it's not the commercials that drive me away. It's the music.

I don't remember which local DJ used that line, but I know I heard him use it at least twice. The second time, a couple of years later, he used it to describe The Raspberries, and I'm sure we'll be discussing that in a future post here. To me, as a popsmacked young teen whose all-time favorite film was A Hard Day's Night, there could be no higher praise. The radio knew what I wanted. And the first time the radio promised me a new band that sounded like The Beatles, the radio gave me a revelation. The radio gave me Badfinger.

I'm not sure which Badfinger hit inspired such fab praise. I know it wasn't Badfinger's first hit "Come And Get It," a little ditty written by Beatle Paul; it could have been "No Matter What," or "Day After Day," both of which ruled my AM radio world with absolute, unquestioned authority. But it could also have been my favorite of favorites, The Greatest Record Ever Made: "Baby Blue."

As noted above, the concept of The Greatest Record Ever Made maintains that an infinite number of records can be the greatest record ever made, as long as they take turns. But it's not--it is never--faint praise. For a record to take its turn as The Greatest Record Ever Made, you have to believe it really is the best thing you've ever heard, or could ever hear, for the full three minutes and thirty seconds (or whatever) that it plays. In that moment, there is no other song. Objectivity can return to you later, after the record's over, or you can effectively delay objectivity by just playing the damned record again. Screw objectivity--this is pop music! And what's objectivity ever done for you, anyway?

"Baby Blue" qualifies. For 3:36 or thereabouts, "Baby Blue" takes everything that's ever been great about rockin' pop music and amplifies it and compresses it all into a sheer, harmony-laden, irresistible force.  There has never been a better single. There are others that can compete, in their own turn, but nothing--nothing--has ever topped it. It sounds like The Beatles. No, it's better than The Beatles. Even as a twelve-year-old kid in 1972, certain to my innermost core that The Beatles were the sine qua non of pop music, I think I still knew in my heart: "Baby Blue" was even greater. Each time I hear it, I still believe that's true.

Badfinger's real life story is one of the most tragic tales in rock 'n' roll's often tear-stained annals. But the music transcends its origin, rises above the show-biz treachery and human frailty that claimed the group itself. "Baby Blue" is the embodiment of why I fell in love with the radio in the first place, and an enduring testimony to why I still love radio's potential, in spite of all efforts to make me give up on that love. Radio gave me Badfinger. I can never repay that debt.

Because these guys? They sounded like The Beatles. And I guess that's all I have to say.