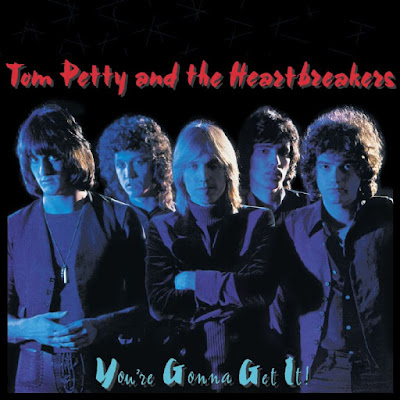 I know I've written several times about Phonograph Record Magazine, a rock 'n' roll tabloid that meant quite a lot to me when I was 17. I discovered the magazine when I was a 17-year-old high school senior in 1977, and even though I only saw a mere two issues of PRM, it was enough to open up a whole new world of possibility within my fevered teen brain. Punk rock? What the hell is that? And why am I suddenly so intrigued by it?

Among PRM's regular features was Pipeline, a determinedly silly column by writer Mark Shipper. And it was in Pipeline that I first heard of a new act called Tom Petty & the Heartbreakers.

Granted, it was just in a humor piece about punk groups, referring to Eddie & the Hot Rods as a singer named Eddie backed by a combo of classic cars revvin' up, and referring to the Heartbreakers as a beleaguered band bullied by a leader so (wait for it) petty that he required 'em all to wear matching underwear beneath their trousers on stage. You might find the idea of considering Tom Petty & the Heartbreakers a punk group funnier than Shipper's jokes (though I would disagree). But Petty and company were indeed swept up in the punk hype initially, spoken in the same breath as The Ramones, even though they sounded more like The Byrds. Nonetheless, the common ground was there. It was new. It was exciting. It belonged to us.

I don't have any real recollection of hearing Tom Petty & the Heartbreakers' first hit "Breakdown" on the radio in '77, though I must have. I did hear "American Girl," and adored its glorious channeling of McGuinn and Clark taking flyte on my FM dial. But it was really the group's 1978 TV appearance on Midnight Special that set me higher. "Listen To Her Heart." "I Need To Know." The album was You're Gonna Get It. I got it. I got it as soon as I possibly could.

The American record-buyin' public caught up with this mob in short order; their third album Damn The Torpedoes shot full speed ahead into the charts, onto the airwaves, and deep within hearts that would not be broken. Their success was proof that great stuff could sell, sell big, and remain great, remain true to itself. No one would ever dare to call Tom Petty a sellout. He was an everyman, one of us, yet still a superstar, the kind of star we wished we could be. When Petty helped to form the supergroup The Traveling Wilburys, his self-assured cool guaranteed him an easy fit; but somewhere far under his skin, I guarantee there was still a starstruck kid from Gainsville, Florida, pinching himself while saying I'm pals with George Harrison, Bob Dylan, and Roy Orbison! His success was deserved. His fame and acclaim were well-earned. But he never forgot the long road he took to get there. His unbreakable heart was made of gold, but forged in rock 'n' roll.

Hearts break this week. Saying goodbye to Tom Petty is not something we were prepared to do.

Breakdown: we opened this week's show with a half hour of Tom Petty & the Heartbreakers. We offered new music from The Flamin' Groovies, Trip Wire, Fernando Perdomo, Jeremy, Thinking Aloud, Rob Martinez, Adam Marsland, The Forty Nineteens, The Condors, Tobbe, Steve Barton with Dave Scheff, and Third Of Never. We wished happy birthday in memory of John Lennon and John Entwhistle. We paid tribute to the late TV producer Jack Good (via a spin of The Monkees' "Naked Persimmon" from the Good-produced special 33 1/3 Revolutions Per Monkee). We played some old faves, and some recent faves. And we played some Tom Petty. Here's to a man who never backed down. This is what rock 'n' roll radio sounded like on a Sunday night in Syracuse.

This Is Rock 'n' Roll Radio with Dana & Carl, Sunday nights from 9 to Midnight Eastern at www.westcottradio.org