My peak years of interest in baseball were the early '70s, say 1970 to 1973 or so, fading away a bit after I turned 13 in '73. Although I obsessed over baseball with an intensity similar to my prevailing (and better-known) passions for comic-book superheroes and rock 'n' roll. even then I didn't necessarily follow the game all that closely. I saw our Triple-A Syracuse Chiefs as often as I could, but as far as the major leagues went, I was more familiar with players from decades past than I was with the then-current state of the pennant race. I constantly read baseball histories, and developed a pseudo-nostalgic attachment to departed teams the New York Giants and the Brooklyn Dodgers. I had a Duke Snyder baseball bat, which I discovered while rummaging in our basement o' treasures. But there was never any question about my favorite big-league team: of course it was the New York Yankees.

There were a lot of reasons why it had to be the Yankees. Part of it was geography and community; in Central New York in the early '70s, most baseball fans were Yankees fans. Nowadays, there are nearly as many misguided Boston Red Sox fans in Syracuse as there are Yankees fans, but that did not seem to be the case during my baseball years. At the time, the Yankees were the parent team to the Chiefs, reinforcing that connection to the pinstripes and allowing the locals a glimpse of the Yankees for one exhibition game against the Chiefs every year. It was not an environment conducive to one becoming a fan of, say, the Cleveland Indians or the Houston Astros. Maybe the Mets. I liked them, too.

My Dad worked as a clubhouse manager for the Chiefs, so I had ample opportunity to see Chiefs games--I left school early for Opening Day every year--including the annual Chiefs-Yankees game. I occasionally "helped" Dad in the clubhouse--no, I tried, I really did!--and I saw Chiefs who would go on to become Yankees. Dad's connections within the organization allowed us to see a couple of games at Yankee Stadium when we visited New York in the summer of '72. And that included a trip to the Yankees' clubhouse on Old Timers' Day.

When I had to deliver Dad's eulogy in 2012, I recalled that Old Timers' Day, that enchanted afternoon from four decades gone: I remember my first visit to Yankee Stadium in 1972, and how Dad being who Dad was, the doors just magically opened for him wherever he went. So we found ourselves in the Yankees locker room on Old Timers' Day, and we got to meet Mickey Mantle and Whitey Ford and Dad's own hero, Joe DiMaggio. One person there, puzzled by how a 12-year-old kid got into that locker room to begin with, asked me who I was. Puffed up with pride, I answered, "I'm Bob Cafarelli's son." There was a brief pause, and then the guy said, "Who's Bob Cafarelli?"

Yeah, try to beat that day for a baseball memory. 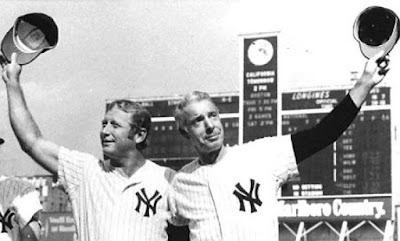 Old Timers' Day '72. I bought a Brooklyn Dodgers pennant from Manny's Baseball World, right across from Yankee Stadium (the guy at the counter repeatedly and irritatedly calling back to inattentive co-workers Brooklyn DODJUHS pennant! BROOKLYN DODJUHS PENNANT!, just trying to complete my order. In addition to Dad's opportunity to meet his hero Joltin' Joe, I saw my hero Mickey Mantle hit a home run. Former Syracuse Chief Ron Blomberg, by then a proud pinstriper himself, recognized me from his minor league days, grabbed me, and lifted me up, bellowing, Hey, how ya doin'? I ain't seen you in a long time! Blomberg also hit a big home run during the official game, bookending Mantle's exhibition-game four-bagger. The crowd booed when a taped message from Yogi Berra concluded that he couldn't be there because his Mets (whom Yogi managed at the time) were playing in San Francisco. In the public area, somewhere between the concessions and the Yankee history exhibits, Dad and I ran into Phil Rizzuto, who wasn't suiting up with the Old Timers, but was there to call the game as a broadcaster. I asked him for an autograph, but my pen had run out ink. Oh, the humanity! Undeterred, the Scooter said, Wait here, kid, went into the private press club, and emerged with a fresh pen. Here ya go, kid!, and he signed my baseball and wished us well. No one should ever even think of badmouthing Phil Rizzuto in my presence. 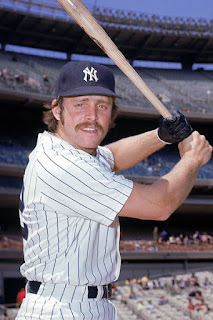 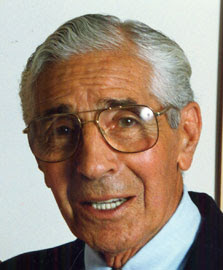 I tried to play baseball myself. I played Little League, and I tried out for Roxboro Road Middle School's team when I was in seventh grade. But I just didn't have it. I later umpired some Little League games, but my baseball career was coming to a close.

In high school, I didn't really give baseball much thought, occupied as I was with the social drama, angst, and thoughts of how elusive girls seemed to be. Oh yeah, and writing. That I could do. As a freshman in college in the fall of 1977, I got caught up in the fever again, rooting for my Yankees and Reggie Jackson in the World Series, and delighting as Mr. October channeled my memories of Mantle and Blomberg to hit 'em outta the park when they most needed hitting. Ladies and gentlemen, your World Series champion New York Yankees!


But that was it for baseball and me, really. I rooted for the Mets over the Red Sox in the 1986 World Series. I caught the occasional Chiefs game after moving back to Syracuse, though the Toronto Blue Jays had long since replaced the Yankees as Syracuse's parent club. (The system later shifted to the Washington Nationals, and the New York Mets have recently announced a plan to buy the Chiefs outright.)

Something drew me back into baseball in 2007. I don't know why, but I started watching Yankees games on TV, even listening to games on the radio, waiting for announcer John Sterling to end with his trademark Ballgame over! The Yankees win! THEEEEE Yankees wiiiiiin! It was the summer that my body turned on me, the fall I wound up in the hospital with a spine in dire need of immediate repair. In between hospital stays, I watched the Yankees, and I watched DVDs of ESPN's The Bronx Is Burning, retelling the stories of the Son Of Sam and the '77 Yanks, all to a soundtrack by The Ramones. Back in the hospital with a blood clot, I watched from my bed as insects on TV swarmed in from Lake Erie, engulfing Yankees pitcher Joba Chamberlain and handing the win to the Cleveland Indians. I healed, but the Yankees' post-season hopes did not. When the Yankees fired manager Joe Torre, I swore off baseball again. 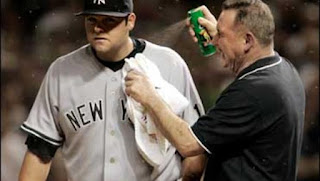 When Dad passed away, my siblings and I decided we would all honor his memory by wearing baseball caps to the gathering after his funeral. The night before the funeral, right before I finished writing the eulogy, I went to the mall to buy myself a new New York Yankees cap. I broke down in tears at the counter. I wear that cap often now. I may not be an active Yankees fan, but the Yankees will always be a connection between me and my Dad, even across the barriers we mortals don't yet understand. The Bronx may not look like Heaven. But it has a direct line.


(I did check in to see Derek Jeter's final home game with the Yanks in 2014. Mantle, Blomberg, and Jackson had nuthin' on him in that game!) 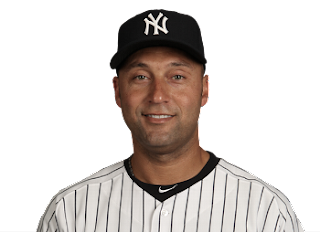 Tonight, if the New York Yankees can manage to beat the Astros in Houston, they're poised to return to the World Series, facing former October rivals the Dodgers. I can't say I'm following it very closely, but I'm rooting for the Yanks, albeit from afar. Aaron Judge could still join Mickey Mantle, Ron Blomberg, and Reggie Jackson in my little mini-pantheon of home-run hitters. Dad would approve. Who's Bob Cafarelli? He's the biggest Yankees fan in Heaven, that's who Bob Cafarelli is. I can hear him cheering from here.

(And, if the Yankees do make it to the Series and beat the "Los Angeles" Dodgers, I'd say those wayward Dodjuhs have gotta move back to Brooklyn. Where they belong.)

Email ThisBlogThis!Share to TwitterShare to FacebookShare to Pinterest
Labels: baseball