THE EVERLASTING FIRST: The Jam 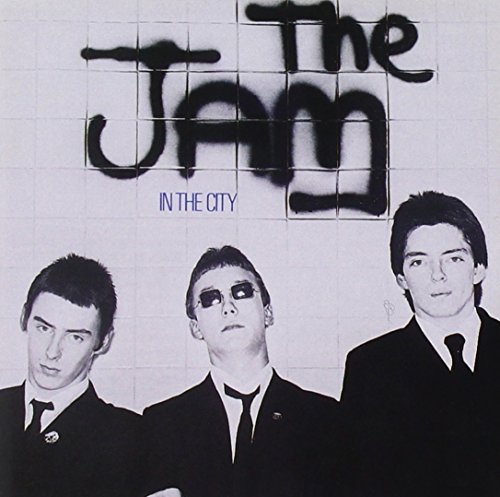 This was originally posted as part of a longer piece. It's separated here for convenience.

Anyone who knows me also knows who my favorite bands are: The Beatles, The Ramones,The Flashcubes, The Monkees, and The Kinks. There are dozens and dozens of worthy acts that I love almost as much--I am proud to be a pop music fanatic and obsessive--but I think I've made it clear that this fantastic five sits permanently up there as my Top, my Coliseum, my Louvre Museum, et al.

The Jam used to be right up there with those Beatles and Ramones, too. While I certainly never stopped loving The Jam, they're not as ever-present in my mind as they were a few decades ago. But in the late '70s and early '80s, The Jam rivaled The Ramones for the coveted title of Carl's favorite rock 'n' roll group.

My introduction to The Jam was inauspicious, to say the least. One afternoon in the Fall of 1977, I was lounging in my freshman dorm room, listening to Brockport's campus radio station WBSU. I listened to WBSU, like, all of the time, constantly pestering the student jocks to play more of the new punk/new wave stuff I wanted to discover--Blondie, The Dictators, The Runaways, and the above-mentioned Ramones brudders--and also more of the '60s stuff I loved, from The Raiders ("Let Me!") and The Dave Clark Five ("Any Way You Want It") through The Monkees (the station owned the only copy of the group's Changes LP I had ever seen, though some of the BSU jocks flatly refused to ever play anything by The Monkees).

But this particular afternoon was a singularly revelatory WBSU session, as I heard The Flamin' Groovies ("Misery"), The Vogues ("Five O'Clock World"), and The Knickerbockers ("Lies") for the first time. And the station also played a brand-new song by a punk group out of England, performing a cover of "The Batman Theme." As I heard the song play, I wrote in my journal: "1977 and Batman's a punk. Progress."

And that was the first time I heard The Jam. 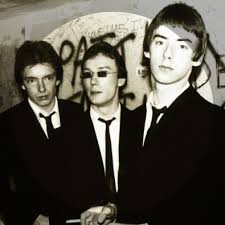 From small things mama, as Bossman Brucie would later say. If I seemed dismissive at the time, I think I was nonetheless intrigued. The Jam next crossed my consciousness in October, when TV's The Tomorrow Show took a look at this punk rock thing that was driving some of these mixed-up kids crazy, with the pogo dancing and the safety pins and the anarchy and the use of impolite language. Tomorrow Show host Tom Snyder promised "a punk-rock jam," but he was himself mixed-up; what he meant was that his guests would include The Jam's Paul Weller, along with Joan Jett from The Runaways, and Kim Fowley, The Runaways' former manager. I don't remember much about this show, other than a sense of no love lost between Jett and Fowley, and the fact that I'd already developed a serious crush on our Joanie ("crush" in the sense that I wanted to hug her and squeeze her and call her Gorgeous; my girlfriend Sharon was neither impressed nor amused). I have a vague recollection that Weller was serious and focused, and that he knew what he was talking about, but the precise details are lost in the cluttered hallway of my memory. I really oughtta at least try applying a feather duster to that place some time. 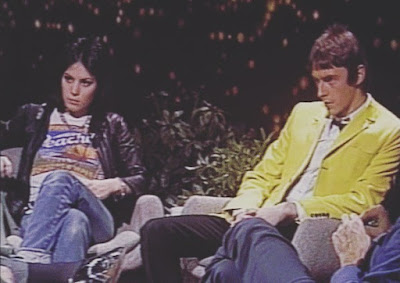 I'm not exactly sure of the sequence of events after that, of how I went from The Jam? to THE JAM!! I do know there were four specific songs involved: "In The City," "I Need You (For Someone)," "The Modern World," and "All Around The World." I can't tell you where or when I first heard any of these, but I can tell you that the first two were staples of The Flashcubes' live set. I saw the 'Cubes for the first time in January of '78, and it was immediately clear that any song they did was okay by me. I bought the U.S. Polydor 45 of "I Need You (For Someone)"/"In The City," and played it often.  I picked up import singles of "The Modern World" (a track I think the 'Cubes also used to cover) and "All Around The World" when I worked at Penn-Cann Mall in North Syracuse that summer. I was hooked. Guitarist Weller, bassist Bruce Foxton, and drummer Rick Buckler had created exactly the sort of modern world I wanted to inhabit. 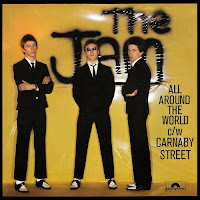 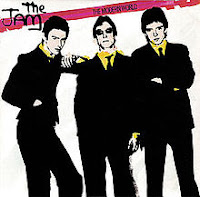 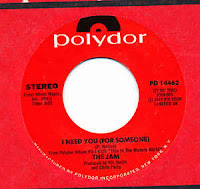 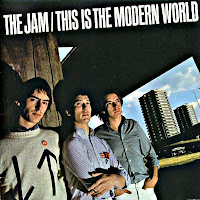 I returned to Brockport for my sophomore year in the fall of 1978. By then, the previously-cited girlfriend Sharon was already three or four heartbreaks ago. In early October of that semester, I aced some test or paper or somesuch, and felt I deserved a reward; so it was down to The Record Grove, where I purchased a copy of The Jam's second LP, This Is The Modern World. I went back to my dorm, and put it on my roommate's stereo, the volume set somewhere north of lethal. God, I loved this record on first spin. Just about everyone considers it The Jam's least-noteworthy effort, but it's always gonna be special to me. "The Modern World." "All Around The World." "I Need You (For Someone)." Then on to the tracks I didn't already know: "Standards." "Life From A Window." Wilson Pickett's "In The Midnight Hour." I couldn't play Side One loud enough.

My next-door neighbor, on the other hand, thought it was already a wee bit too noisy. I hadn't even met this chick yet, but she pounded on our mutual bedroom wall, imploring me to turn that goddamned racket down already. I grumbled, cursed, but complied. Ever the gentleman, that's me! I did eventually meet this girl next door later that month. Her name was Brenda. Wonder whatever became of her...? 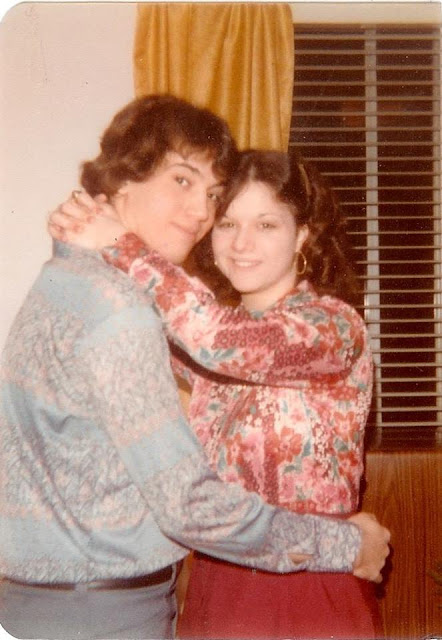 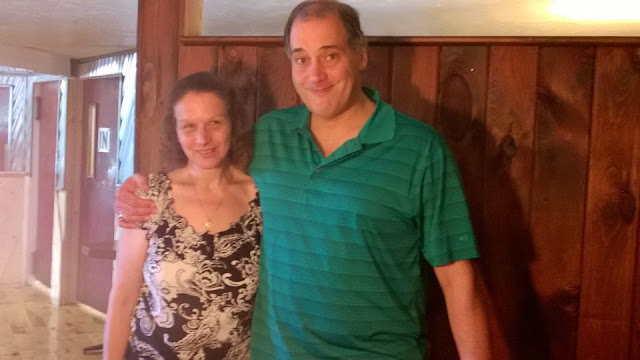 (And yes, she still thinks I play that goddamned racket too loud.)

The Jam didn't exactly fall beneath my radar after that, but I didn't get their next album, All Mod Cons, until well after the fact. Someone--either my then-current roommate Tom or my future roommate Paul--played "Down In The Tube Station At Midnight" for me on his WBSU show in the spring of '79; I liked it, I guess, though it didn't have the exuberance, the immediacy of the Jam tunes I already loved. It was...mature. It would take some getting used to. 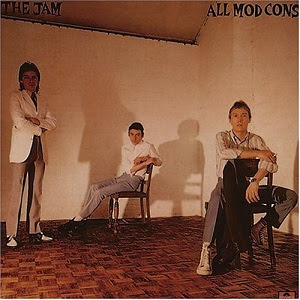 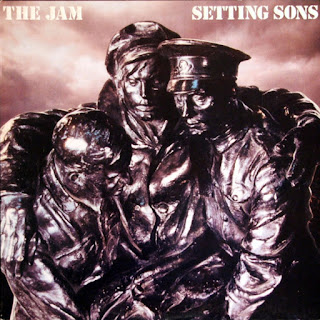 By the time I adjusted to the idea of a more grownup-sounding Jam, the group hit me with a new album, Setting Sons. What an amazing record this was! I rarely listen to whole albums nowadays, but I owe myself the pleasure of giving this another complete spin soon. Supposedly originally created as a concept album--a dirty phrase in the post-punk world of 1979-1980--Setting Sons succeeds as a stunning song cycle, simmering with the charred embers of shattered idealism, discarded friendships, wistful memory, and defiant hope. I regard Setting Sons as The Jam's masterpiece.

The Jam's follow-up album, Sound Affects, was nearly as good, highlighted by "That's Entertainment," an unforgettable number that Weller is said to have written following a pub crawl; the track would have been worthy of The Kinks. The "Going Underground" single was another winner, and The Jam were firmly ensconced near the Toppermost of my Poppermost. 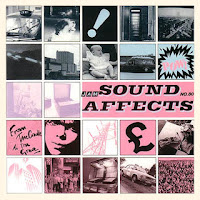 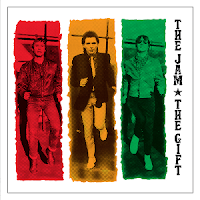 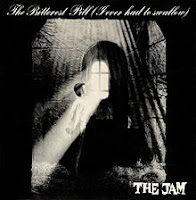 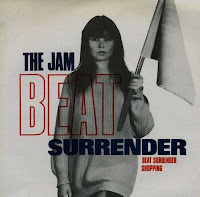 And then they were gone. Another album (The Gift), and a pair of 1982 farewell singles, "The Bitterest Pill (I Ever Had To Swallow)" and "Beat Surrender," and Weller pulled the plug. The Jam never caught on in the States at all, but they were huge stars in Great Britain, and they quit at the height of their success. I never had much interest in Weller's next project, The Style Council, but I have to concede neither he nor the rest of The Jam owed me anything. They'd already shown me the modern world, and all around the world: in the city, down in the tube station at midnight, lost in a strange town, Eton rifles beneath a burning sky, gone underground to a town called Malice. That's entertainment. 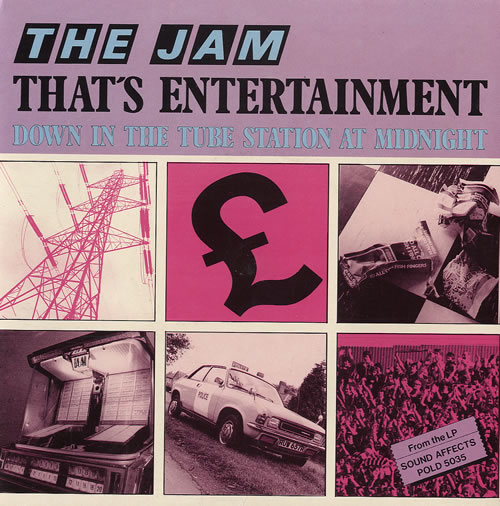