THE EVERLASTING FIRST: The Inferior Five 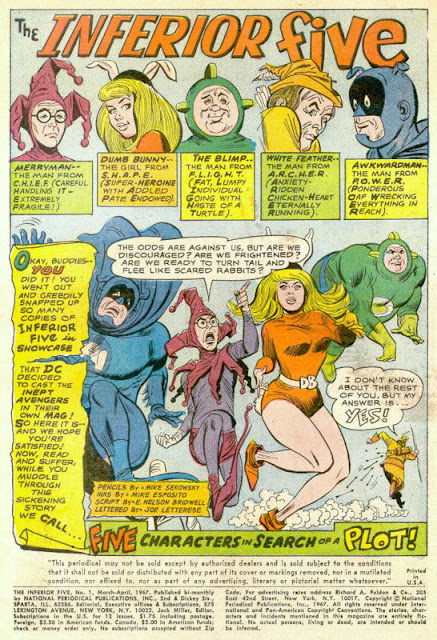 In the '80s, a writer named Mike Tiefenbacher was working on some funny animal comics for DC. Tiefenbacher was using a pair of supporting characters he'd named Sacco and Vanzetti, but his editor objected, pointing out that kids wouldn't get any reference to Sacco and Vanzetti, the anarchists convicted and executed (perhaps wrongly) in the 1920s. Tiefenbacheer agreed that, of course the kids wouldn't get the reference, but that the names were inherently distinctive and funny in context, and that the kids would respond to that. (The editor won the argument. Editors always win arguments.)

But Tiefenbacher was right. Kids do respond to what seems funny, to what strikes them as delightfully silly, regardless of whether or not they understand the motivation, the relevance, or the back story. They just think it's funny; they just know it makes them laugh.

I was seven years old when DC published Inferior Five # 1 in 1967. It was loaded with references I didn't get, including direct parodies of the TV show The Man From U.N.C.L.E., a show I knew about but didn't really know. None of that mattered. Inferior Five was silly, busy, energetic, frantic fun. It was funny. It made me laugh; I understood that fact just fine. 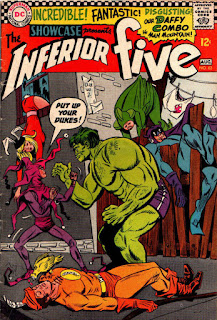 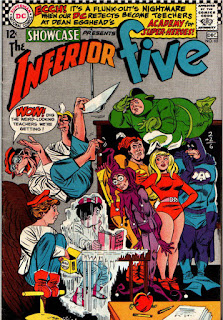 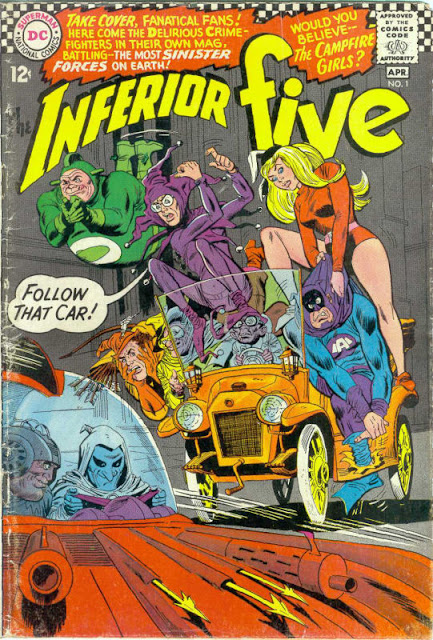 The Inferior Five's name was a take-off of Marvel's Fantastic Four, but that was where the similarities ended. The I5 was created by writer E. Nelson Bridwell, a DC staffer who'd been basically the first comic book fan to break into the comic book industry in the '60s. The team had made three previous appearances in DC's try-out book Showcase before debuting in its own title. I didn't see any of the Showcase appearances until years later, but those issues revealed the back story that the earnest but inept members of The Inferior Five were all legacy heroes, the sons and daughter of various members of a Justice League doppelganger called The Freedom Brigade: the 97-pound (and still losing weight) weakling Merryman, the powerful but clumsy Awkwardman, the cowardly archer White Feather, the corpulent, slow-flying Blimp, and the beautiful, super-strong but dim-witted Dumb Bunny. 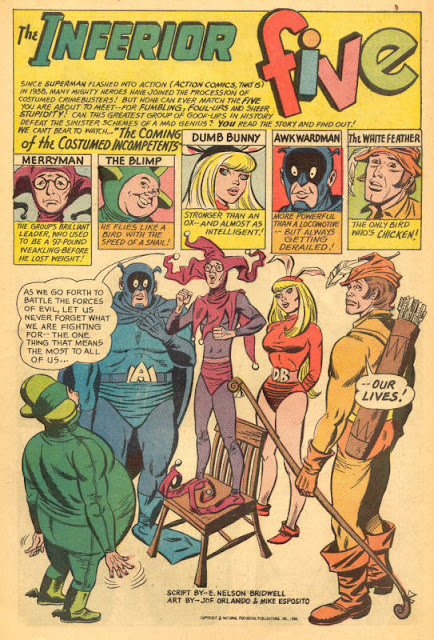 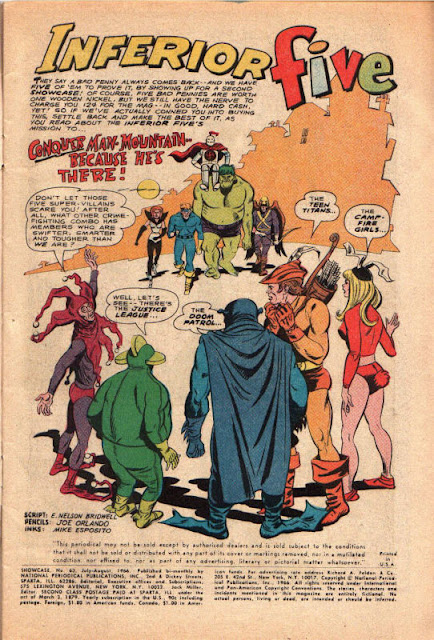 When I first met this intrepid quintet in Inferior Five # 1, the I5 was summoned by good guy spy outfit C.O.U.S.I.N. F.R.E.D. (Competent Organization Utilizing Scientific Investigation for National Fiend, Ruffian and Evildoer Defense)--it was the '60s, and super-secret acronyms were everywhere--to thwart the evil machinations of H.U.R.R.I.C.A.N.E. (Heinous, Unscrupulous Rats and Rogues Initiating Criminal Anarchy and Nefarious Evil). By page 10, The Inferior Five (along with Merryman's grandfather, the elderly Green Hornet counterpart Yellowjacket) were being debriefed by characters lampooning The Man From U.N.C.L.E.'s Mr. Waverly, Napolean Solo, and Illya Kuryakin (Mr. Ivanhoe, Caesar Single, and Kwitcha Belliakin). 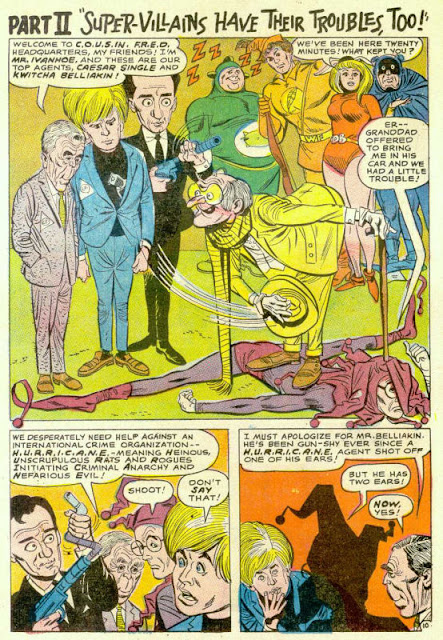 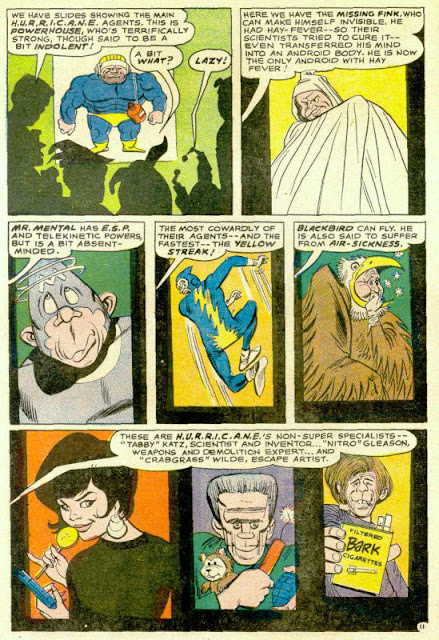 Did I understand all of this when I was seven years old? No. Did I find it amusing? Oh God, yes! Action! Chills! Spills! Thrills! Plus, I learned what the word "indolent" meant! My favorite line in the whole damned thing was when the evil "Tabby" Katz, seeking to avoid a beat-down from Dumb Bunny, held up an artificial plastic baby and implored, "You wouldn't hit a woman with a baby, would you?" "No," Dumb Bunny replied, "I'd hit her with a grown man!" And. She. DID! 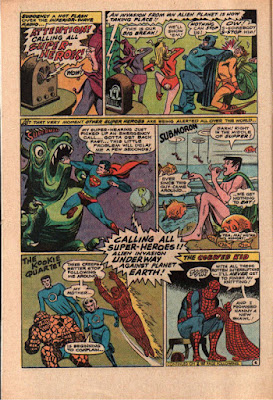 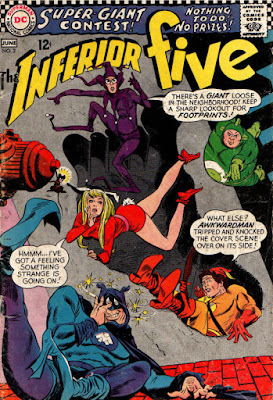 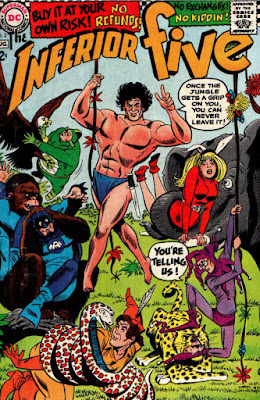 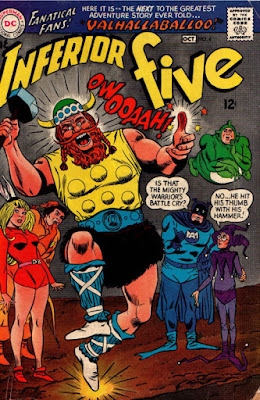 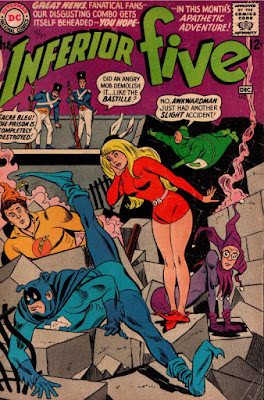 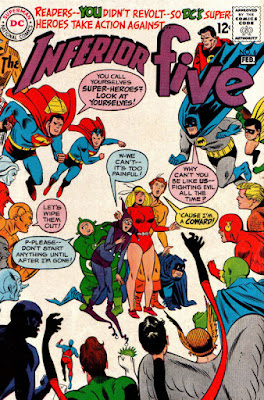 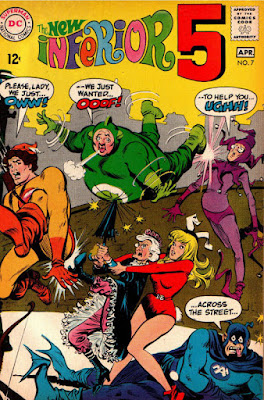 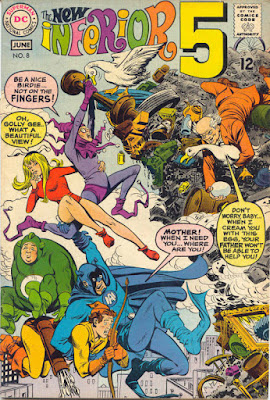 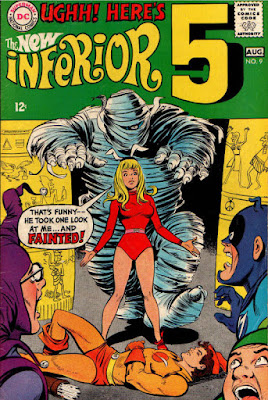 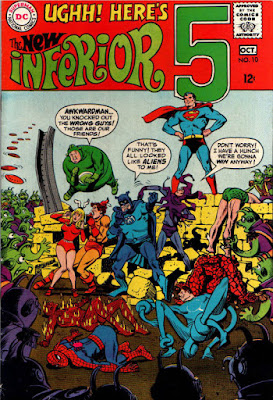 I next caught up with the inept avengers in Inferior Five # 3 (guest-starring a Tarzan clone called Darwin of the Apes), and again from Inferior Five # 7 through its tenth and final issue in 1968. I absorbed the I5's encounters with seemingly familiar characters like Cobweb Kid, Allergy Queen, The Kookie Quartet, Sub-Moron, and Iron Pants, plus Superman, Groucho Marx, and Norton from The Honeymooners. In the '70s, I went back and completed my Inferior Five collection. And, with or without pastiches of other characters, I loved the individual heroes of The Inferior Five. 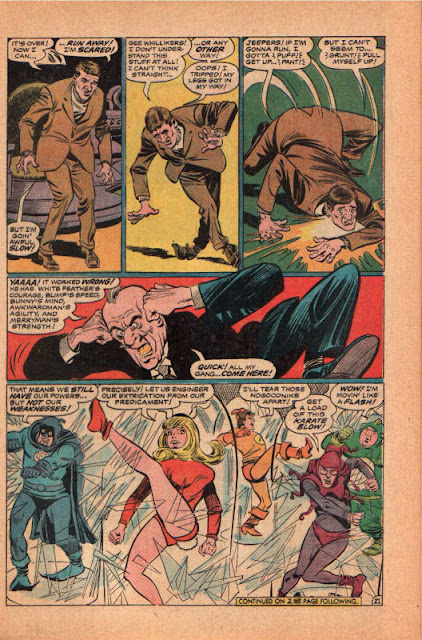 Um...especially Dumb Bunny. Even at the age of seven, a couple of years before sneaking my first look at Playboy, I understood the appeal of a beautiful woman wearing rabbit ears on her head and a cotton tail on her curvy derriere. See, kids understand more than ya might think. 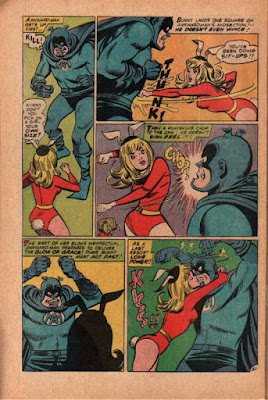 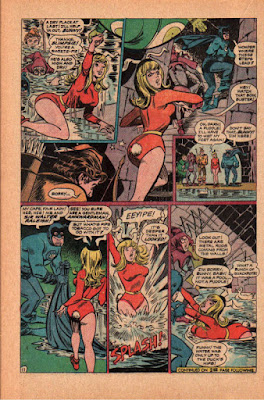 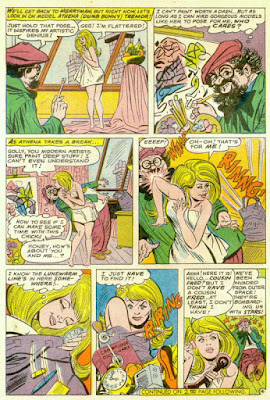 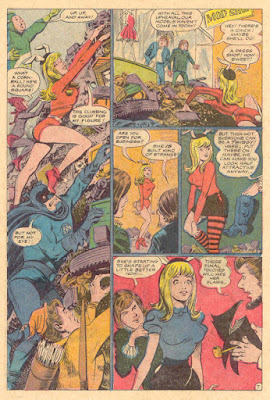 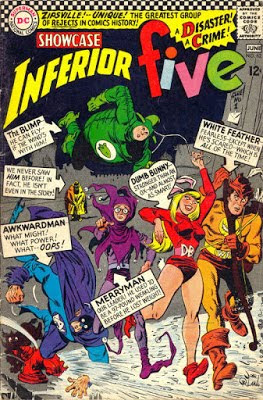 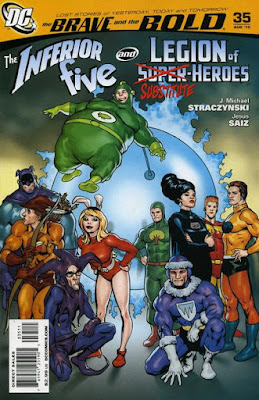