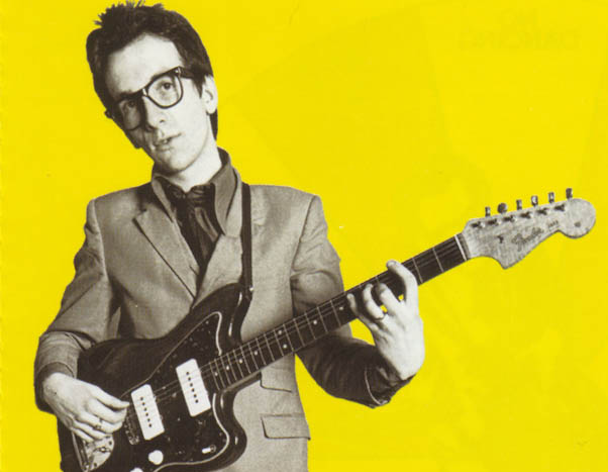 I spent much of high school wishing that I had a steady girlfriend. By the beginning of the spring semester of my freshman year in college, I had somehow broken the hearts of three girls that were interested in me, and all three in rapid succession. I wasn't proud of it then, and I'm for damned sure not proud of it now.

I broke up with Theresa by mail over Christmas break. Our brief time together had accelerated too fast--too much too soon--and needed to end. It was entirely my fault. Her hurt feelings were kind of like the hurt feelings of another girl I was already seeing at college when Theresa and I got together, and of a girl back home, a girl I loved but whom I'd concluded--incorrectly, it seemed--wasn't interested in me as anything more than a friend. I wasn't a Casanova. I wore my heart on my sleeve. But I screwed up, and suddenly I was surrounded by nothing but scorched earth.

For all that, Theresa and I were still (unwisely) spending a lot of time together as the spring semester commenced in Brockport. And she accompanied me to see Elvis Costello and the Attractions play in the Student Union Ballroom in February of 1978.

As with so many other acts I discovered in 1977-78, I first heard of Elvis Costello in the pages of Phonograph Record Magazine. I hadn't yet heard any of his music as the fall semester ended, but I would be introduced to it on the same night that so many other Americans first witnessed it: December 17th, 1977. That night, The Sex Pistols were scheduled to be the musical guests on Saturday Night Live. Theresa had given me a copy of Never Mind The Bollocks, Here's The Sex Pistols for Christmas, and my best pal Jay Hammond came over to my house to watch the Pistols' U.S. TV debut. But as the opening credits rolled, The Sex Pistols were nowhere in sight. Elvis Costello's name appeared instead. And all across America, people looked at their TV screens and said, Who the hell is Elvis Costello?! 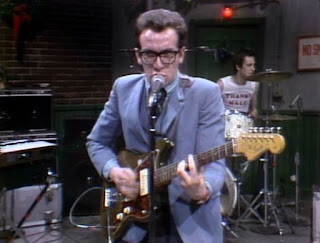 We learned the answer to that question soon enough. Subbing for The Sex Pistols (who were still in England, sorting out issues with their U.S. visas), Elvis Costello and the Attractions gave an edgy, quirky, explosive performance on Saturday Night Live. Though not really a punk band, Elvis Costello and the Attractions were likely the first band anywhere near the periphery of punk that most Americans had ever seen or heard. The Attractions smoked on SNL, delivering a simmering, cantankerous performance of "Watching The Detectives," and entering rock 'n' roll TV history (and earning the ire of SNL producer Lorne Michaels) when Costello interrupted their planned performance of "Less Than Zero" and unexpectedly switched to an incendiary "Radio, Radio" instead. Ballsy, punk move. That's who Elvis Costello was. 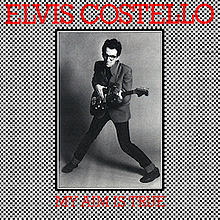 Costello's debut album, My Aim Is True, featured studio backing by a group called Clover; he formed the more raucous, willfully chaotic Attractions after that. My Aim Is True was well-received by critics; I suspect a few critics may have embraced it because it was tangentially punk, but not really, and endorsing it might make such critics seem slightly hipper than they actually were. But My Aim Is True was a terrific album, deserving of accolades regardless of the unconscious reasons prompting such praise.

Still, it was surprising to return to Brockport and discover that Elvis Costello was scheduled to perform on campus. Although there was some underground support for punk and new wave among a beleaguered minority of students (and a very small handful of DJs on the student-run radio station WBSU), Brockport was simply not a hip place. The predominant musical taste of Brockport students was embodied by The Grateful Dead, Southern rock, and similar shit-kickin' and/or stoner stuff. It was either that, or dat ole debbil disco. The campus newspaper The Stylus had dismissed The Sex Pistols' album in a fit of blind, frothing fury: "Simply put, this album sucks." This was not a CBGB's crowd.

Nonetheless, Costello's show was well-attended. I went to the concert in a small group with Theresa and her former boyfriend Fred, with whom I'd remained friends even after I stabbed him in the back by stealing his girlfriend. Decades later, that pang of guilt still aches inside. But that evening, our minds were on the show to come. 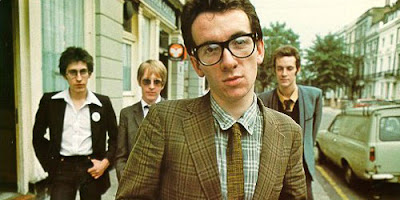 This was only my third rock concert. I'd seen KISS in 1976, and (yechh!) The Charlie Daniels Band in '77. More importantly, though, I'd seen my first club show and my first punk or new wave or trend du jour show in January, when I witnessed Syracuse's own power pop powerhouse The Flashcubes for the first time. I already knew that was a life-changing experience; why not hope for another revelation, with Elvis Costello and the Attractions?

As we waited outside the ballroom before showtime, Costello rushed sullenly and silently past us, en route to his soundcheck. We heard run-throughs of "Alison" and "(The Angels Wanna Wear My) Red Shoes" coming from behind the closed doors of the ballroom. It would be the only time we'd hear either of those songs that night.

When the doors finally opened, we pushed our way into the ballroom to find seats. There were a few proto-punks among the crowd, including one guy who'd left his good sense at home and decided to wear a swastika armband. He was--how to put this delicately?--a fucking idiot. Subtle (as a flying mallet) encouragement forced our young punk to see the error of his ways, and he flipped the verdammt armband over, hiding the offensive symbol. My patience with nimrods brandishing Nazi images remains negligible, at best. 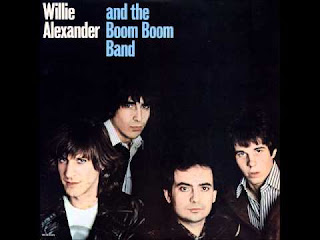 The opening act was Willie Alexander and the Boom Boom Band. WBSU had been playing their hard rock cover of The Righteous Brothers' "You've Lost That Lovin' Feelin'," which I liked a lot. But the crowd detested them; Fred said that Alexander was copying Lou Reed, and not copying him very well. Neither of us knew at the time that Alexander had himself been in a late version of The Velvet Underground, some time after Reed left the group. I liked Willie Alexander and the Boom Boom Band's performance just fine; the chorus of boos that prompted Alexander's ragtag band to end its set, flash a single finger at the audience, and leave the stage early indicated I was probably alone in that sentiment.

The crowd had grown...well, if not quite ugly, at least impatient and ill-tempered. Drugs and alcohol may have played some small role in making some of the concertgoers more irritable--and I say "may" in the sense of "the sun may rise tomorrow," or "you may see photos of naked women if you flip through the pages of Penthouse." This wasn't gonna end well. 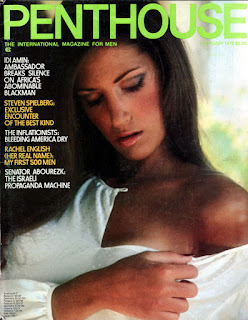 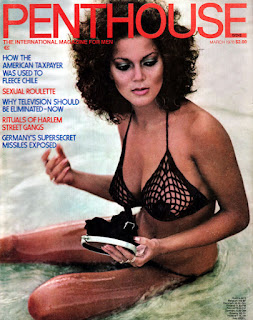 Elvis Costello and the Attractions were electric: crackling, buzzing, radiating power and menace. The crowd remained unimpressed. I couldn't tell you what songs were played; I only knew a few Costello songs at the time, and they'd played two of 'em during the soundcheck (and only during the soundcheck). I only remember the fantastic, pulp-noir "Watching The Detectives," a glowing ball of incandescent malevolence; as the band played that song, a drunken heckler right in front of us began to berate Costello. During the song's jagged, loping instrumental break, the blitzed irritant in the audience continued to harass Costello, snidely shouting You sing your song! as Costello fixed him in a steely gaze and lifted his mic stand, clearly and visibly considering throwing it at this loudmouthed malcontent. Given our proximity to the asshole in question, I saw a plausible possibility that I was about to be impaled by an airborne mic stand--and I was one of the few enjoying Costello's performance!

But the projectile did not come. The show ended, prematurely, as Elvis Costello and the Attractions exited the stage, shrugging off the disapproval of a ballroom full of people who may or may not have had any clue about what they'd actually wanted. 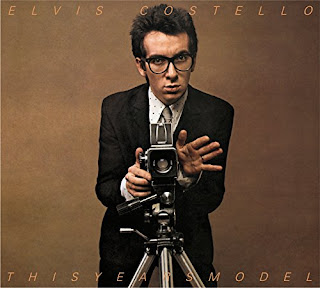 Some context: Elvis Costello was himself a well-known asshole at the time, brusque and rude, as evidenced by his famous dumbass comments about Ray Charles the following year. And there were Elvis Costello fans in attendance that night; however, most of those fans had been hooked by the expertly-played tracks on My Aim Is True. Costello's first album with the Attractions, This Year's Model, hadn't been released yet, so few had heard much of the new, rougher sound of Elvis and his new band. This review of the show expresses that viewpoint. And I understand that perspective, even while disagreeing with it.

Everything means less than zero. Theresa and I remained on relatively friendly terms, but saw each other less and less as the semester wore on. Fred left Brockport after that semester, though he visited the campus a few times the following year (and he sold me a used copy of The Monkees' Head soundtrack LP, a record which was tough to come by in the late '70s). My roommate broke my copy of My Aim Is True during one of our frequent altercations; I was furious then, but looking back, I realize the troubles were at least as much my fault as his, and probably more my fault than his. I had a lot of growing up to do. I still hope to do that. Someday....

At the very least, I got a little bit better at trying not to break the hearts of people around me. There were still a couple of broken hearts of my own waiting just around the bend; those are wounds that never fully heal, and enduring them made me further regret ever making anyone else feel that way. My aim became true. I met a girl named Brenda, and things started to work out. I used to be disgusted; now I try to be amused.

And the first record Brenda ever bought for me? Armed Forces by Elvis Costello and the Attractions. Oh, I just don't know where to begin.... 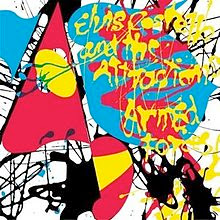 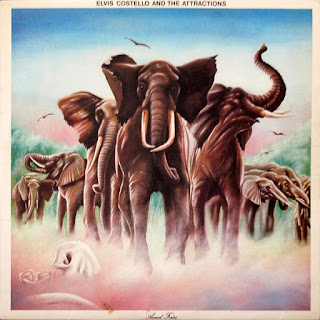