He Buys Every Rock 'n' Roll Book On The Magazine Stands, Part 3: Power Pop Means Pop With POWER! (Not some whimpering simp in a Beatles haircut)

Continuing a look back at the rock magazines I used to read. Part 1 is here, Part 2 is here. 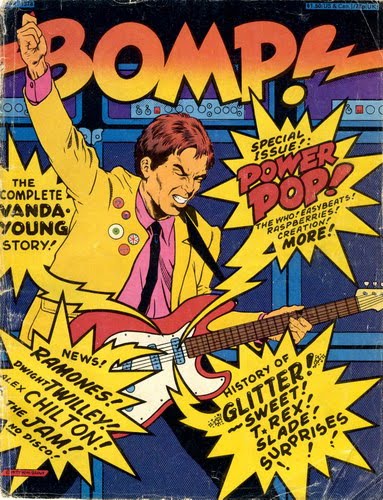 My favorite music had a name. I didn't know that name until I was in college.

"Power pop" is a misunderstood genre, and there will never be a true consensus on its meaning and parameters. It's my favorite music. It's not my only favorite music--I adore so many sounds that fall outside my strict definition of power pop, even many that fall outside a broader, nebulous approximation--but it's my primary boppin' raison d'être. My awareness of power pop, my understanding of its meaning, began in 1978 with an incredible magazine called Bomp!

I'm not certain where I first heard this "power pop" phrase. It was coined in 1967 by Pete Townshend to describe his music with The Who: "Power pop is what we play--what The Small Faces used to play, and the kind of pop The Beach Boys played in the days of 'Fun, Fun, Fun,' which I preferred." When the late night NBC talk show Tomorrow did a spotlight on punk rock in October of 1977 (with guests Joan Jett of The Runaways and Paul Weller of The Jam), host Tom Snyder prefaced the discussion by noting that, "This is called punk rock, and is also called new wave music, street rock, or power pop." I betcha that was my introduction to the term. Roughly contemporary to that, a section in The Record Grove in Brockport (then managed by Bill Yerger, soon to open his own great store Main Street Records) was devoted to this strange noise, and the divider for that section said something like "PUNK, New Wave, Garage, Power Pop, Etc." In January of 1978, I saw my first Flashcubes show; at the time, I thought The Flashcubes were punk, and I thought they were fantastic. I didn't know they were power pop. I didn't know what power pop was.

That specific revelation came in March of 1978. 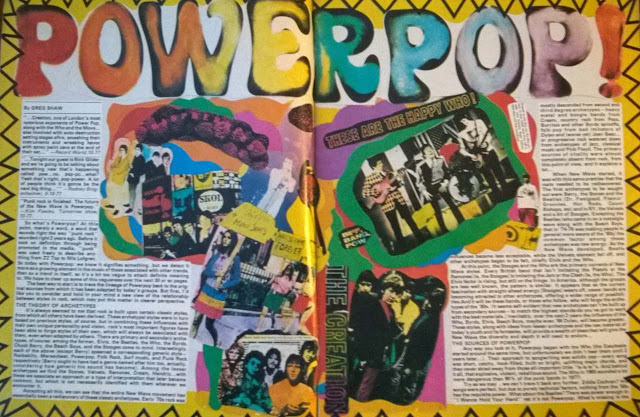 Bomp! magazine was the brainchild of Greg Shaw, whose work I'd already seen in Phonograph Record Magazine (the rock tabloid that hooked me on the notion of punk rock to begin with), and in the sumptuous liner notes package for the way-fab 2-LP collection History Of British Rock Vol. 2. By '78, Shaw was ably assisted on Bomp! by a writer named Gary Sperrazza! (always with the exclamation). Sperrazza! rarely gets the credit he deserves in the power pop story, but he was just as essential as Shaw in making Bomp! such a compelling and influential read. Nowhere was that impact more evident than in Bomp!'s March '78 issue. The eighteenth issue. The power pop issue.

As noted above: REVELATION!!

Jesus, this wasn't a rock mag; it was a manifesto, pop advocacy journalism unlike anything I'd seen before. Shaw and Sperrazza! saw power pop (referred to in Bomp! as the single word "powerpop") as a distinct genre, not a mere reaction or marketing term. They traced the origin of power pop squarely to The Who, and included other dynamic '60s acts like The Kinks, Small Faces, and Creation (the latter a group I'd not heard of before that point). It continued into the '70s, with The Raspberries (whom Gary 'n' Greg obviously considered the definitive power pop act), The Flamin' Groovies, The Dwight Twilley Band, some scattered tracks by The Bay City Rollers, and even into some of the then-current punk stuff like The Ramones. Especially The Ramones! Many years later, when I corresponded with Shaw, he reiterated his belief that you couldn't conceive of something called "power pop" if it didn't include "Rockaway Beach" by The Ramones.

Bomp!'s view of the power pop equation was simple and evocative: the punk of The Sex Pistols plus the bubbly pop of teen idol Shaun Cassidy equals the power pop sound of the early Who. Shaw and Sperrazza!'s power pop timeline specifically excluded The Beatles and Eddie Cochran, whose records they felt lacked the prerequisite explosiveness, and The Rolling Stones, whose records were more plainly grown from R & B roots. The magazine also included coverage of British glam/glitter (seen as a complement to power pop), and a history of some group called Big Star. Hmmm. Never heard of them. But that would change. Man, would that ever change!

Around this time, "power pop" was also beginning to gather momentum as a marketing term, an opportunity for skittish record-label weasels to offer a diluted form of punk energy in an inoffensive package. It was a million miles away from what Bomp! was preaching. It manifested in bands like The Pleasers, a British combo that looked like a pub-tour version of Beatlemania! I liked The Pleasers, and their records deserve better than just being slagged for not being The Who, The Raspberries, or The Ramones. But they didn't meet the dynamic ideal of Bomp!'s power pop vision. Shaw and Sperrazza! pushed back at this co-opting of power pop, Sperrazza! sneering in a subsequent issue, "After all, power pop means pop with POWER! Not some whimpering simp in a Beatles haircut." 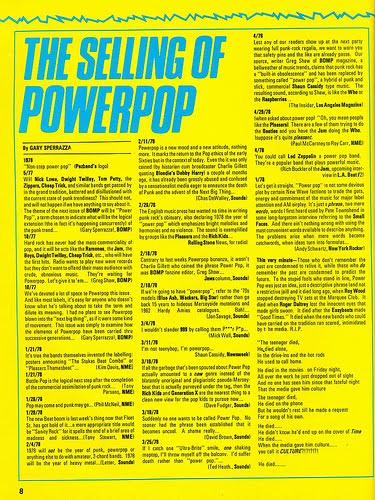 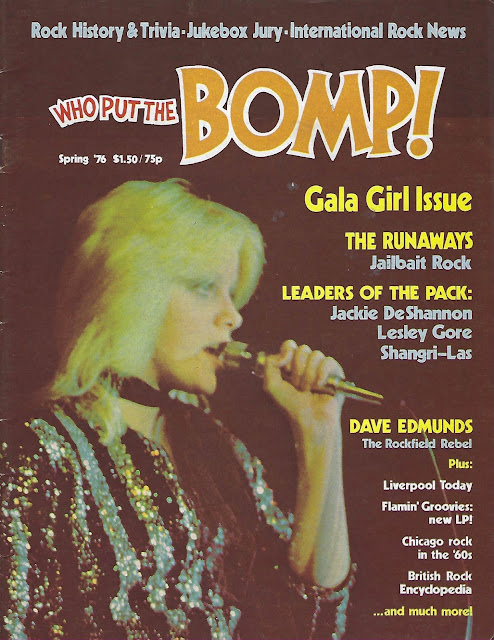 Bomp! magazine predated the '70s discussion of power pop. It had begun in 1970 as Who Put The Bomp, itself an outgrowth of an earlier Shaw zine called Mojo Navigator And Rock 'n Roll News. Who Put The Bomp evolved from fanzine format into a slick rock mag, and its focus shifted slightly from a longing look at rock's past to a more active inclusion and appreciation of '70s acts that likewise embraced the glory (and lessons) of the '60s. The Flamin' Groovies were the first then-contemporary group to grace the cover of Who Put The Bomp (for its thirteenth issue in '75). Cherie Currie of The Runaways was on the cover of Who Put The Bomp # 15. The magazine's name was shortened to Bomp! with issue # 16, showing Brian Wilson on the cover. Sperrazza! joined the crew in time for Bomp! # 17, which arrived with the glowering visage of The Sex Pistols' Johnny Rotten grimacing from its face, a sign that evolution was becoming revolution. 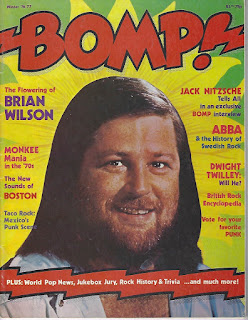 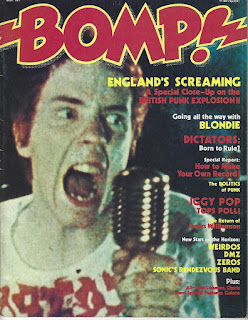 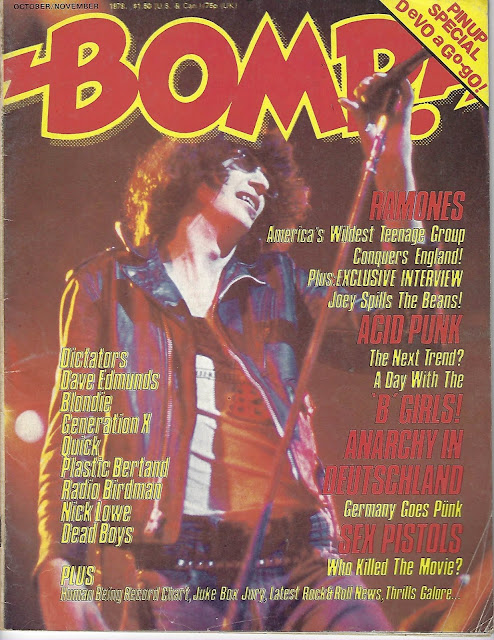 The magazine didn't last much longer than its power pop manifesto in Bomp! # 18. Joey Ramone was on the cover of  # 19, but I missed it. I scrambled back to buy it via mail order when I discovered it had featured a short blurb about my Fave Raves The Flashcubes, and I hadda have that! Shaw, in fact, inspired The Flashcubes' second single, Gary Frenay's "Wait Till Next Week." Shaw had told the lads they would be mentioned in the next issue of Bomp! Time passed, and the issue did not appear, as Shaw kept promising "Wait 'til next week!" An alternate line in the song (as performed live, not on record) addressed that inspiration:

Greg Shaw writes about the music scene
Told us that he'd put us in his magazine
Three months later, it's nowhere to be seen
He says, "Why don't you call me next week?" 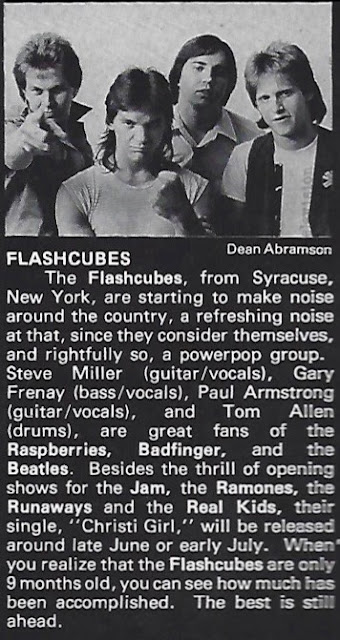 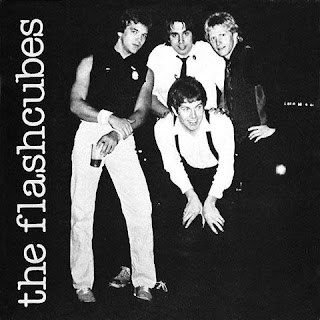 I was able to grab the next two issues at Main Street Records, content and engaged, still eager for more from what had clearly become my favorite rock rag. But that twentieth issue in 1979 was it; a planned Bomp! # 21 was never published. The beat would not go on. 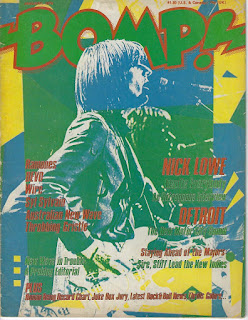 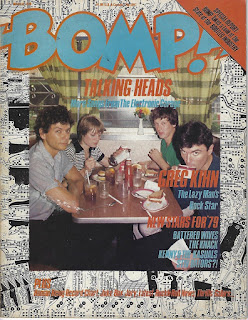 Well, the beat wouldn't go on in print, at least not in the pages of Bomp! However, Shaw had started an indie label, Bomp Records, a few years before that, commencing with a Flamin' Groovies 45 in 1975. The label outlived the magazine, and released a number of incredible singles and LPs by the likes of The Romantics, The Last, Nikki & the Corvettes, Stiv Bators, and The Plimsouls. Somewhat soured by the power pop implosion, Shaw's interest moved to neo-'60s garage, an interest served by his new label, Voxx Records. By the time of my brief correspondences with Shaw in the '90s, power pop had long since fallen off his radar. (My email interviews with him were an invaluable resource in crafting my history of power pop, The Kids Are Alright!) Shaw passed away in 2004. The Flashcubes happened to be playing a show that night. I informed them of Shaw's death, and they played "Wait Till Next Week" as a tribute, its original line about Greg Shaw intact. One more time. 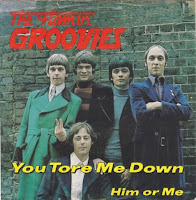 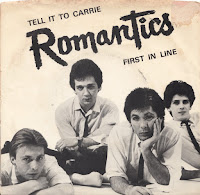 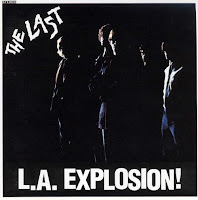 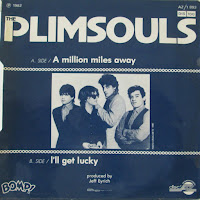 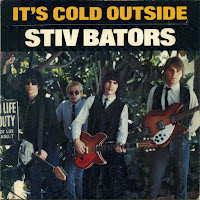 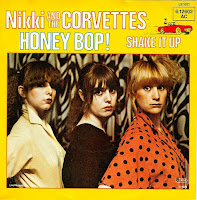 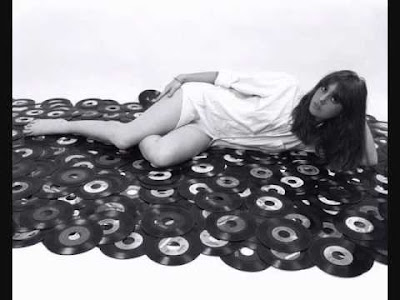 Greg Shaw did get a little bit of recognition for the influential work he did. I don't believe Gary Sperrazza! ever received his just due. I met Gary when I lived in Buffalo in the mid '80s (a tale told within a longer reminiscence called The Road To GOLDMINE). That seminal power pop issue of Bomp! had also detailed Gary's pervasive interest in soul and funk, asking that musical question, "Where are the Sex Pistols of black music?" So it was no surprise when Gary opened a record store specializing in soul, funk, R & B, and hip-hop, Apollo Records on Elmwood Avenue in Buffalo. Apollo also had a back room well stocked with choice garage, rock, and pop platters, so I visited often. Gary died in that miserable year of 2016. I regret he never got the credit he deserved in the power pop story.

Bomp! magazine was about much more than just power pop. It's an ongoing testament to the sheer prevailing whomp of that lone power pop issue of Bomp! that the magazine remains so umbilically connected to the discussion of all loud things that jangle, buzz, and chime. More than anyone else before or since, Greg Shaw and Gary Sperrazza! defined the parameters of power pop. Many others (me included) have tried to refine the subject, sharpen its definition (and expand it just enough to include The Beatles, ferchrissakes). But no one did it better than Bomp!

Nowadays, our weekly radio show This Is Rock 'n' Roll Radio with Dana &Carl  has a nominal power pop format, but we mix Motown and punk with our "September Gurls" and "Go All The Way." As much as I love power pop, and as much as I want its definition to be clear and distinct, I have absolutely no interest in doing a strictly power pop show. What fun would that be? A more general rockin' pop framework is way more interesting to me, with The Isley Brothers flowing into The Rubinoos, The Velvet Underground, P. P. Arnold, Badfinger, and KISS. Even though we don't always remain within the criteria of power pop, we call ourselves a power pop show anyway.

Why? Because power pop means pop with power! Bomp! said so. Don't argue with Bomp!

WHEN WE RETURN: America's ONLY Rock 'n' Roll Magazine! 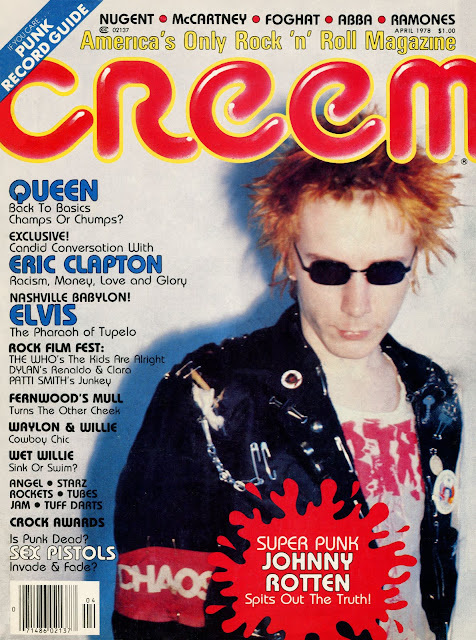