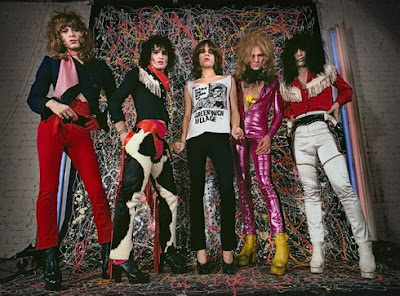 This was originally posted as part of a longer piece. It's separated here for convenience.

As a rockin' pop fan in the early-to-mid '70s, when I was in middle school and high school, I was fortunate enough to be exposed to a lot of great stuff on AM radio in Syracuse. Sure, WOLF-AM and WNDR-AM played a lot of the same fantastic records that other stations were playing across the country, from Badfinger to The Isley Brothers to Alice Cooper, and many more. But a lot of records that didn't gain much traction elsewhere were AM hits in Syracuse, records like Slade's "Gudbuy T' Jane," Sweet's "Blockbuster," The Raspberries' "Tonight," and "Hoochie Koochie Lady" by Elf (with regional hero Ronnie James Dio). I didn't start listening to FM radio at all until around '76 and '77, when Utica's WOUR-FM started turning me on to Nick Lowe, Graham Parker, The Greg Kihn Band, The Rubinoos, and even The Sex Pistols. I had opportunities to hear some terrific records on the radio, where terrific records belong.

And The New York Dolls completely escaped my notice. 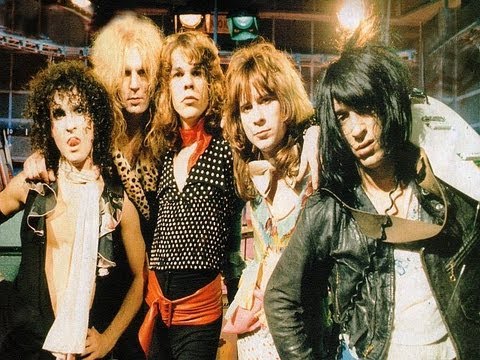 I doubt the Dolls ever got any AM spins in the 'Cuse. I've read that the group played at The Lost Horizon sometime during this span, so maybe there was a local FM station playing with Dolls, but if so, I missed it. I never even heard of The New York Dolls; I didn't hear 'em on the radio, didn't see 'em on TV when they appeared on Don Kirshner's Rock Concert, didn't read 'em about in the few rock mags I perused prior to their combustion and implosion in 1975. All of that would come later for me.

The first time I remember seeing the name "New York Dolls" was in the tabloid pages of Phonograph Record Magazine in 1977. No. Even as I type that, a sudden memory warns me I may be wrong, baby, wrong. The Dolls were referenced (in derogatory terms) in a rock history book that I think I read some time before that; the book's snooty British writers dissed the Dolls in no uncertain terms. I'm grateful to that largely-forgotten book for stoking my nascent interest in The Kinks, but still resentful with how casually its myopic pundits slagged the Dolls and The Monkees.

The take on the Dolls in Phonograph Record Magazine wasn't necessarily positive either; a report on the New York scene mentioned Big Apple advocates and scenesters who "still think they were right about The New York Dolls." "Right?" Wait. What..?! But there was also an underlying sense that at least some of PRM's scribes had some affection for these gaudy, glittery enigmas. Meanwhile, back in the suburbs, I wondered who the heck these New York Dolls were. 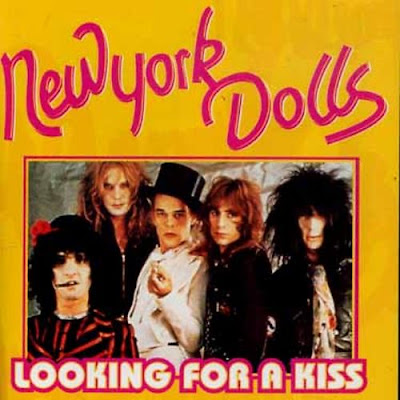 Punk hit me in 1977, fueled in part by Phonograph Record Magazine, in part by hearing the Pistols on WOUR, in part by discovering how records by The Ramones and Blondie matched my preconceived blind-date intrigue once I finally got the chance to hear the damned things in college that fall, and in part because I was a lonely square-peg teenager looking for some rock 'n' roll, something that sounded more like The Yardbirds and The Dave Clark Five and less like the awful disco and mellow fluff that had stolen my AM airwaves. Looking for a kiss, I acquired a girlfriend, Sharon, who liked me but couldn't stand the music I listened to. I rather suddenly acquired another girlfriend, Theresa, who also liked me, also thought my music to be noise, but bought me a copy of the Pistols' LP for Christmas. Nonetheless, we split up over the holiday break. My search for a kiss resumed. And I still hadn't heard The New York Dolls.

I was the last of my siblings still living at home. For Christmas of '77, it was decided that my parents and I would travel to see each of the robins who'd already left the nest. We visited my brother Rob and his family in Albany (where I received a copy of the Alive II album by KISS). We headed to Nashville to see my oldest brother Art and his family. I recall riding in the car with my parents, and hearing Michael Nesmith's "Joanne" wafting from the radio as my Dad drove through West Virginia. From there, we would move on to Cleveland to visit my sister Denise. Before leaving Nashville, we stopped at a J.C. Penney store for...well, for whatever reason it was that we stopped. At that time, Penney's still carried records, though probably not for much longer after that. The Nashville store had a bin of cutouts for me to sift through. And the cutouts included New York Dolls, the group's eponymous 1973 debut. 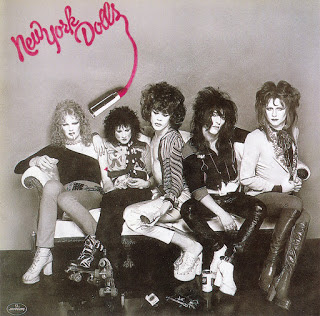 Yep. There it was.

It seems unlikely that I'd never seen a Dolls album before. Surely there'd been one in the racks at Gerber Music or Camelot or Cleveland's Record Revolution during the many. many times I'd rummaged through, seeking sounds. But if so, I'd never payed it any mind. The New York Dolls weren't on my radar until punk put them on my radar. I stared at the record in Nashville. Something like three bucks, maybe three-fifty, maybe. I turned it over and back over, examining the graphics of this strange group in their makeup and mascara, uncertain....

And I put the record back on the shelf. On to Cleveland!

It didn't take long for me to regret that choice. I'm not sure why I hesitated, nor why I opted out. I guess, after all I'd read, I was still unsure if I'd care for the Dolls. In that moment, I was unwilling to take the chance, even at a discount. But yeah, regret came soon thereafter. I still hadn't heard The New York Dolls, and I'd just blown my chance to hear 'em at a lower price.

Meanwhile, the Dolls' mystique grew in my mind. Now, I read about them in Rock Scene, I learned a greater appreciation of their influence on the punk rock I loved, and I cringed the next time I saw a Dolls album available for sale: a 2-LP import set, priced outta reach like a 2-LP import set should be. Oh, the humanity...! 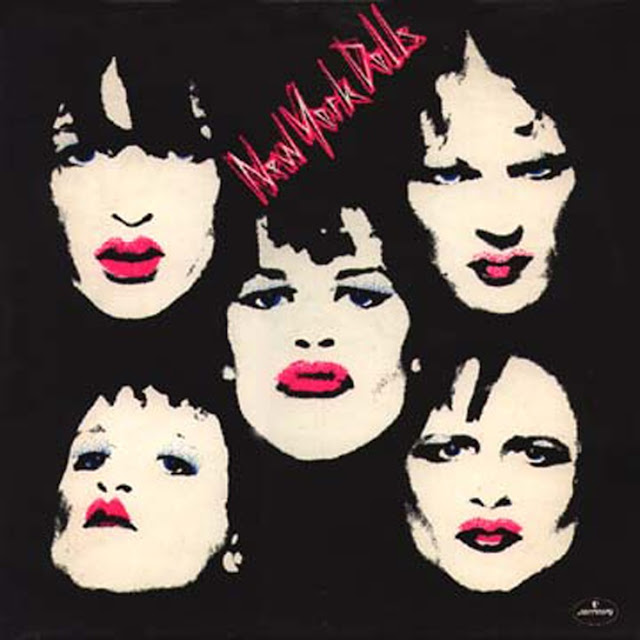 In January of 1978, I saw The Flashcubes for the first time. A cursory glance at this blog's index will show that I've written about The Flashcubes once or twice or a gazillion times already. I saw the 'Cubes as many times as I could, whenever I was back home during school breaks. The Flashcubes had great original songs, great energy, and great taste in covers. Via The Flashcubes, I heard my first New York Dolls song: "Personality Crisis."

I don't know whether or not The Flashcubes introduced "Personality Crisis" as a Dolls tune, but I recognized the title from Rock Scene. I wondered if the 'Cubes song about not wanting to be a human being might also be a Dolls song called "Human Being," though that one turned out to be an original song by 'Cubes guitarist Arty Lenin instead. Whatever. "Personality Crisis" was magnificent, and I further kicked myself for my folly in Nashville. 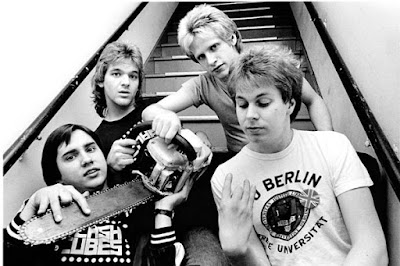 It would still be almost another year yet before I'd finally hear the Dolls themselves. In the spring of '79, a friend at college let me borrow an import compilation album called New Wave, an LP that introduced me to The Dead Boys and to "Shake Some Action" by The Flamin' Groovies and "New Rose" by The Damned. And, at long last, it let me hear "Personality Crisis" and "Who Are The Mystery Girls" by the motherlovin' New York Dolls. The following July, The Flashcubes opened for former Dolls frontman David Johansen at The Slide-Inn in Syracuse. I'd heard a bit of Johansen's eponymous solo album, and was blown away by his live set. Before that show, I'd tried to describe The New York Dolls to a friend who hadn't heard them, and I settled on saying the Dolls were a cross between KISS and The Sex Pistols. Inaccurate, I guess, but best I could do at the time, and the friend was sufficiently intrigued to go see Johansen's show. Johansen included a trio of Dolls favorites in his setlist: "Babylon," "Personality Crisis," and Bo Diddley's "Pills." And we saw that it was good. 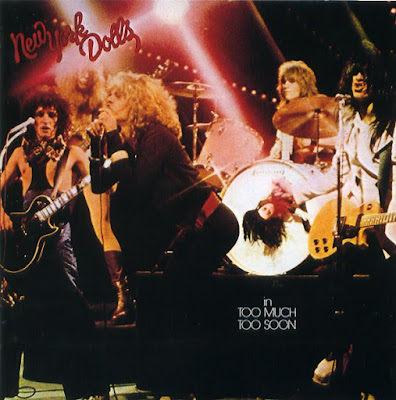 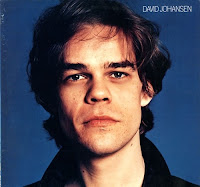 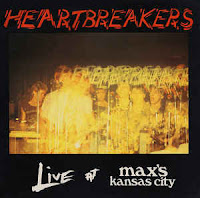 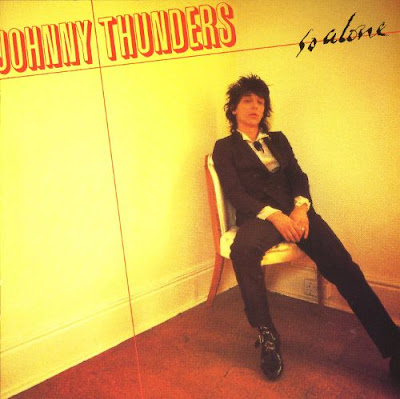 I saw Johansen a number of times over the next few years. I found a truly beat-up copy of the first New York Dolls album at a thrift shop (for about what I would have paid for that sealed missed-opportunity back in Nashville). I found the group's second and final album, Too Much Too Soon, on cassette at Brockport's Main Street Records. I became a big fan of former Dolls guitarist Johnny Thunders, both solo and with his post-Dolls combo, The Heartbreakers. A fight with my girlfriend led me to miss my chance to see The Heartbreakers, but I did see Thunders in Buffalo around '86 or so. Thunders was wrecked, huffing on a huge joint on stage, complaining to the crowd, You people have driven me to pot! A young woman talking to a companion in front of the stage during Thunders' acoustic set caused him to reprimand her, Little girl, if you wanna chat, go to the little girls' room. I'm tryin' to perform up here! 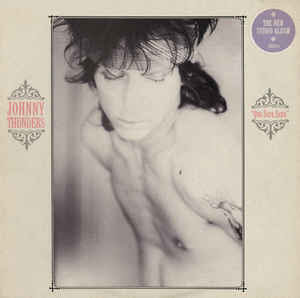 But every time Thunders' hands touched his electric six-string, I heard the careening, wailing wall of gutteral guitar grunge that headbutted and inspired the Pistols, The Ramones, The Clash, The Flashcubes. It was Chuck Berry via Keith Richards, messed up and muddled up, made dirtier and seamier, then brushed with a tacky blush that masked nothing, revealed everything. I loved The New York Dolls. I loved Johansen. But Johnny Thunders? I worshiped Johnny Thunders.

My heroes have always been junkies. Thunders' addictions and frailties marked him among those expecting short lives, born to lose, baby he was born to lose. His uncharacteristically tender love song "You Can't Put Your Arms Around A Memory" served as his epitaph. His death was inevitable. I wept when it happened nonetheless. 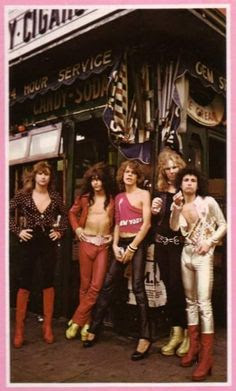 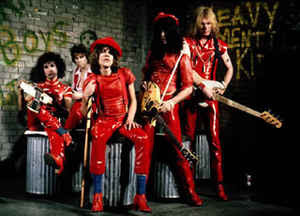