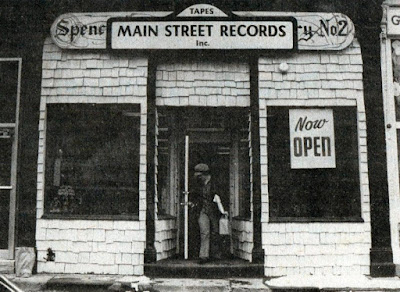 For every moment of celebration or heartbreak, there has always been a song.  There was an artist to create the song.  There was a DJ to play the song, and a pop journalist to tell us about the song.  And, if we were lucky, there was a kind, knowing soul at the record store to sell us the song, so we could take it home and listen to it over and over again.  In that role, there were no kinder souls than Bill and Carol Yerger, and there was no safer haven than Main Street Records in Brockport, New York.

When I went off to college in Brockport in August of 1977, Main Street Records did not yet exist.  I was already a vinyl hound, with a little stack of records scored at flea markets and retail outlets in Syracuse and Cleveland (where my sister lived).  I needed music, in any shape or form.  There were two record stores in Brockport in '77, both on Main Street:  the tiny Vinyl Jungle, which did not survive through 1978, and the larger (but hipper) Record Grove, which was managed by Bill Yerger.  My first Record Grove purchase was a pair of 45s:  "God Save The Queen" by The Sex Pistols, and a record I'd read about in Phonograph Record Magazine but had not yet heard, "Sheena Is A Punk Rocker" by The Ramones.  SWOON!  My life changed as soon as I played it the first time.  And there would be much more of that to come.

What did I get from the Yergers?  Man...dozens and dozens and dozens of albums, with titles like Marquee Moon, Raw Power, Imagine, Mr. Tambourine Man, Damn The Torpedoes, L.A.M.F., and Pure Pop For Now People; various-artists sets like Hard Up Heroes, Ear Piercing Punk, The Motown Story, Battle Of The Garages, Wanna Buy A Bridge? and Beatlesongs!; LPs and singles by Blondie, Cheap Trick, Little Richard, Love, Radio Birdman, The Chesterfield Kings, The B-52's, The Left Banke, Devo, Them, The Five Americans, Joe "King" Carrasco & the Crowns,  Herman's Hermits, The Tremblers, The Damned, The Village People, Hendrix, Boston, Billy Joel, The Bongos, Earth, Wind and Fire, Led Zeppelin, Josie Cotton, Public Image, Stars On 45, Joy Division, The Laughing Dogs, The Boomtown Rats, Robin Lane & the Chartbusters, Blue Oyster Cult, The Crawdaddys, Dave Edmunds, Elvis Costello, Elvis Presley, The Knack, The Holy Sisters Of The Gaga Dada, The Doors, 20/20, The Cucumbers, Queen, Quincy, Blotto, Dylan, Phil Seymour, The Revillos, The Searchers, Graham Parker & the Rumour, Holly & Joey, The Rattlers, Great Buildings, Shrapnel, Gary Lewis & the Playboys, The Dead Boys, The Lords of the New Church, Roxy Music, Cherry Vanilla, Tommy Tutone, The Vapors, Kansas, Blue Angel, The Hypstrz, The Fast, Pete Shelley, The Quick, Soft Cell, Pat Benatar, The Cars, Gary Numan, Mott the Hoople, The Dictators, Squire, AC/DC, Kim Wilde, The Invictas, Alice Cooper, The Outsiders, The Music Explosion, and then all of the records listed on the playlist below.  And then still more stuff, and more after that.   I was voracious.  And I was satisfied.

Any clerk can sell you a damn record.  Bill and Carol could help you find the record you didn't even know you needed.  They could--and would--make recommendations:  "You'll like this.  I don't think you'll like that.  This one might be good.  Have you heard this?" Direction transcended the verbal; maybe it wasn't all that unusual to find a magazine like Trouser Press at a record store, but how many small shops in small towns also carried Bomp! magazine, or The Pig Paper?  How many little village stores had such a wealth of popular favorites and obscure nuggets available in such great supply, whether new releases, cutouts or used LPs (often from Bill's own collection)?   Main Street Records was a business, and it needed to turn a profit, but Bill and Carol had loftier goals alongside the necessity of making a buck.  "Carl," Bill told me, "we're gonna make a Beach Boys fan out of you yet."  Carol asked me what my favorite Beach Boys song was; when I answered "Sloop John B," she was appalled, and muttered as she turned away, "Who's favorite Beach Boys song is 'Sloop John B'...?!"  I had a lot to learn.  I loved every minute of learning it.

(As a further illustration of how much I owe the Yergers, consider my cherished Flashcubes live tape.  The Flashcubes were my favorite power pop group; if you think it's silly that my three all-time fave raves are The Beatles, The Ramones, and The Flashcubes, then go get your own radio show.  But The Flashcubes only released two 45s before imploding in 1980, and that certainly wasn't enough to sustain me.  I borrowed a cassette of a 1978 Flashcubes live show from a pal, I brought it to Main Street Records, and I asked Bill to copy it for me.  He did so, and that tape was the only long-form Flashcubes document I had for years and years.  It wasn't something Bill had to do, but he did it anyway.  To me, that was the most important cassette I ever owned, a tape I only had because of Bill's kindness.)

I moved out of Brockport in the summer of 1982, though I still visited sporadically for a couple of years thereafter, always making sure to stop at Main Street Records and add to my collection.  The very last time was in the summer of 1988.  Our friends Brian and Lisa were visiting my wife Brenda and me in Syracuse; on a whim, we decided to hit the highway and visit Brockport for the day.  Naturally, we had to check in at Main Street Records.

Bill recognized us immediately, and we chatted as if we were still regulars there.  Brenda talked about her apprehension in starting a new job as a preschool teacher, and Bill offered words of encouragement, just as teacher Carol had offered Brenda similar encouragement years before.  The talk turned to The Monkees, and I mentioned that I had never seen the group's then-rare 1969 TV special, 33 1/3 Revolutions Per Monkee.  Well, Bill owned a copy of it, and he promised to make a dub and mail it to me in Syracuse.  We chatted a bit further, we made our purchases--okay, MY purchases--and we said our goodbyes.

The VHS tape of 33 1/3 Revolutions Per Monkee arrived in the mail some time thereafter, filled out with miscellaneous clips from Shindig and Hullabaloo, plus The Monkees' 1970 promo clip for the single "Oh My My," a fave track of Brenda's.  I still have the tape, and I still have the note that Bill sent with it:

Here's a tape full of hits--but I got carried away and the "Oh My My" clip isn't totally complete.  Anyway, someday I'll put it on another tape in full for you.  Okay?

Brenda, for what it's worth--I think you'd make a GREAT teacher, and I can speak with some authority on it because I've been married to a great teacher for years!

Anyway, I hope you both had a nice day in Brockport.  Your friend, Bill"

I only corresponded with Bill a couple of more times after that, via e-mail in the '90s.  He told me that he had sold Main Street Records because it wasn't fun any more.  I told him that, if nothing else, his long-ago efforts had finally paid off, for I was now a huge Beach Boys fan.  When I wrote a history of power pop for Goldmine magazine in 1996, I acknowledged Bill & Carol Yerger, and Main Street Records, among my primary inspirations; Bill e-mailed me his appreciation, and signed his note "Fuzz Bass Willy."

It was the last contact I ever had with Bill Yerger; he passed away not very long after that.  He was younger then than I am now.  It's too late to mourn, but I still feel sad.  And I've grown so weary of feeling sad.

There are places I remember all my life. That line itself comes from one of Bill Yerger's favorite songs.  There has been a song for every place and every face, for each lonely teardrop, for each smile that's ever bust out at full speed.  Bill Yerger was the man who sold me records; he was a friend, and he was a mentor.  I learned so much about pop music just from shopping at Main Street Records, and that is one of the foundations upon which this show is built, the foundation upon which my brief career as a pop journalist was built.  It is a debt I can never fully repay.  But I believe that I do pay it back, just a little, whenever I play records...especially when I play records for someone else.  It was Bill Yerger's gift to me, and it's my own lasting legacy of the best little record store there ever was.

It's time for some songs.

This edition of THIS IS ROCK 'N' ROLL RADIO with Dana & Carl is a tribute to Bill and Carol Yerger.  Every one of the tracks we played this week, including the 27 song-snippets heard in our opening medley, is a tune I got from the Yergers at either The Record Grove or Main Street Records.  It could have been a thirteen-hour show.  Bill and Carol, I thank you for the days.  And I turn it up loud, so that everyone can hear.

THIS IS ROCK 'N' ROLL RADIO with Dana & Carl streams live every Sunday night from 9 to Midnight Eastern, exclusively at www.westcottradio.org.