John Lennon: A Life In The Day 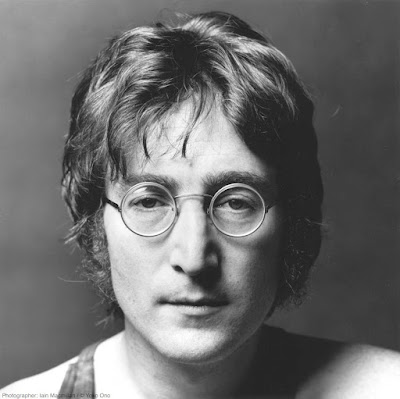 [When writer John M. Borack was putting together his wonderful John Lennon book Life Is What Happens in 2010, he contacted various pop pundits for brief, personal reminiscences of what Lennon meant to us.  This was my contribution.  You should also get John's book because, y'know, it's pretty good, too.  http://www.amazon.com/John-Lennon-Life-What-Happens/dp/1440213917]

I was four years old when The Beatles first visited America.  On paper, that means I was too young to have been a Beatles fan at the time, but who are we kidding?  In 1964, EVERYone knew The Beatles, even a four-year-old suburban kid, and especially a four-year-old suburban kid with teenaged siblings.  The Beatles were everywhere, on TV and on the radio (AND HOW on the radio!), on bubblegum cards, magazine covers, posters and a million miscellaneous Fabmania products--I had a Beatles wallet.  When A Hard Day's Night opened later that year, I was there at the North Drive-In in Cicero, NY to see The Beatles' cinematic debut--and all the girls in all the cars (including ours) were screaming at the screen.  COOL!, I thought.

Media exposure--and it never did seem like overexposure--made The Beatles a part of our everyday lives, delivered by their movies, their TV appearances, their press conferences and their Saturday morning cartoon TV series (a show that had no actual Beatle involvement, sure, but which nonetheless reinforced our already-formed public caricatures of John, Paul, George and Ringo).  John was indisputably the leader, the wiseass, Beatle # 1.  Even as time wore on, as The Beatles broke up into four less-interesting solo acts, my teenaged rock 'n' roll fantasy was to one day be in a band with John Lennon, dueting on a version of "Come Together" before a frenzied, sold-out crowd at the Onondaga County War Memorial.  Our group, of course, would just be an interim thing, before The Beatles' own inevitable reunion.

In late 1980, I was a recent college graduate, working at McDonald's, trying to write, and playing as a ringer with some college buds on their co-ed intramural broomball team.  On December 8th, a couple of teammates had convened at my apartment a little before midnight for some beers prior to a 1:00 am playoff game.  The phone rang--my pal Jay, calling from Albany.  "Carl," Jay asked, "are you watching television right now?"

Learning of Lennon's murder was a weird sensation I still can't properly articulate.  Didn't seem real--nothing is real, and nothing to get hung about.  We turned on the radio, which by now was only playing Lennon records.  We trudged off to the game, feeling…well, "weird" is still gonna have to suffice.  The game itself turned out to be a particularly rough, physical contest, and dirty play on the part of one of our opponents resulted in our goalie Christie breaking her collarbone.  Christie left the game in an ambulance, but play resumed; I recall that I brought a new level of untapped anger to my own play, lashing out, furious, with my girlfriend imploring me to stop, to let it go.  We lost, and adjourned to join Christie at the hospital, where we stayed with her until 6 am.  And then I was off to work.

I worked through my shift, consumed by a mood that defied description.  Sullen?  Sad?  Pissed off?  Sure.  During a break, I grabbed a piece of paper and began writing out the lyrics to a song from the only John Lennon solo album I owned:

Christ, you know it ain't easy.

Posted by Carl Cafarelli at 7:26 PM