I have often spoken of The Flashcubes, a power pop band from Syracuse that has meant a great deal to me.  In 2014, it was my great honor to induct The Flashcubes into the SAMMYs (Syracuse Area Music Awards) Hall Of Fame: 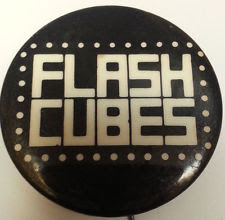 Times change.  Things change.  Years ago, after an early Flashcubes gig, a club owner said he wasn't going to pay the 'Cubes because, whatever it was they had played, he didn't think it was actual music.  In the late '70s, even as the 'Cubes were gaining followers, there were a lot of people around town that hated The Flashcubes, or worse, thought that The Flashcubes were a joke.  Well, tonight, the joke's on them.  Tonight, we induct The Flashcubes into the Syracuse Music Hall of Fame.

The Flashcubes began in 1977, a power pop band, inspired by punk rock but also influenced by The Raspberries, Badfinger, The Beatles, and The Kinks.  They were four separate forces combined as one:  bassist Gary Frenay was a pop guy, through and through; guitarist Paul Armstrong was pure rock 'n' roll, a punk since way before Sid Vicious ever saw his first safety pin; guitarist Arty Lenin was a six-string wizard, a kindred spirit to the artier bands you heard on the fringes; and drummer Tommy Allen was all of the above, a Partridge Family fan who played like Keith Moon.  Together, The Flashcubes were the Bomp! Magazine ideal of Shaun Cassidy + The Sex Pistols = the power pop sound of the early Who.  They wrote tons of original songs that lived up to their influences, and they put on a live show like no one else could.

The Flashcubes' original career was brief.  First gig was September 1st, 1977 at the Brookside, opening with a super-charged cover of "Hold Me Tight" by The Beatles.  They did shows with The Jam, with The Ramones and The Runaways, The Police, The Romantics, Joe Jackson.  They played in Buffalo, Detroit, Boston, New York...everywhere.  They released two singles, "Christi Girl" and "Wait Till Next Week," on their own label, Northside Records, and a major label deal seemed certain.  In late 1978, before a show at SU, the announcer promised, "One day, very soon from now, you people are going to be able to say, 'I saw this band before they were famous.'"

And then...they didn't become famous.  Paul Armstrong was replaced by Mick Walker in 1979, and The Flashcubes broke up in 1980.  Not famous.  Not likely to be remembered.  But, oddly enough, destined to become legendary.

"Legendary?" Strange, but true:  During their long hiatus, from 1980 to about 1992 or so, an international mystique grew around this obscure band from Syracuse, and somehow--through cassette tapes traded hand to hand, through word of mouth, magazine articles, and the sheer, growing devotion of people who just KNEW--The Flashcubes became known as The Great Lost Power Pop Band.  Rhino Records included "Christi Girl" on a power pop anthology CD in 1993.  And The Flashcubes reunited:  Gary, Arty, Paul, and Tommy, together again!  They've been together ever since.  And each live show still earns them new fans, every time, in every place.  The Flashcubes even get called back for encores when they play at IPO, the International Pop Overthrow pop music festivals--and NO one gets an encore at IPO!

The Flashcubes have now released six CDs, including a live album from their first Japanese tour.  Wait--Japanese tour?!  Yep, The Flashcubes have toured Japan twice now, playing for enthusiastic audiences that sing right along, because the Japanese fans know every Flashcubes song.  The Flashcubes' most recent album, Sportin Wood, won the SAMMY last year for Best Rock Album.  So I guess that club owner--you remember him, the one that didn't want to pay these guys because they didn't play actual music?--he was just another part of a familiar story.  In 1962, The Beatles were told that guitar groups were on the way out.  In 1976, a radio DJ ripped The Ramones' first album off the turntable and threw it across his studio, yelling, "What is this?  We don't need this!"  And The Flashcubes were dismissed because they didn't play actual music.  That all seems funny now, quaint...and on the wrong side of history.  Times change.  Things change.  Because in 1962, guitar groups were just gettin' started; because in 1976, pop music was in dire need of a three-chord punk rock jolt; and because, right here in Central New York, The Flashcubes did play actual music--actual, great, unforgettable rock 'n' roll music--and that's why we honor them tonight.

And tomorrow night at the Palace, we all get another chance to see The Flashcubes play live!

Music connects us.  The music we listen to, the music we love, is always there for us when we need it...and we always need it.  We've all had our hearts broken, we've suffered loss, we've endured setbacks; but there has also been joy, occasional peace, and a prevailing certainty that life can be wonderful, that life is worth savoring, that life is love, and love can be all you need.

And life is music.  The Beatles.  The Ramones.  The Flashcubes.  Times change.  Some things don't change.

I have waited over 36 years to say this, and I say it now with pride and delight:  Please join me in welcoming The Flashcubes into The Syracuse Music Hall of Fame.

Posted by Carl Cafarelli at 9:49 AM