The Flashcubes: A Cellar Full Of Boys

The Flashcubes--Syracuse's own power pop powerhouse--have always been important to me, and I think I've done some of my best writing when given the opportunity to write about Gary, Arty, Paul, and Tommy.  These are my liner notes for A Cellarful Of Boys, a collection of Flashcubes demos and otherwise-uncollected tracks. 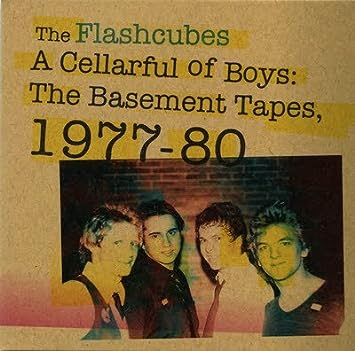 Syracuse, New York is not New York City.  People who aren't from around here don't understand how different these two places are, that folks in Syracuse can't take a subway to Manhattan, and can't even grab an egg cream en route to a Broadway play. The difference is not merely geographical, nor solely in the vast disparity in population levels; the two cities share a state, but little else.  The tiny city of Syracuse and its Central New York suburbs are surrounded by countryside and farmland, the transition from urban to suburban to rural accomplished within a twenty-minute drive. The people tend to be relatively conservative. The area's architecture is defined less by skyscrapers and more by shopping malls.  There are no subways.

This is not meant as criticism.  I was born in Syracuse.  I grew up and still live in its suburbs--I love the area and I'm unlikely to move away.   But I've also always looked to New York City as the center of the universe, the capital of the world, the wellspring of excitement and inspiration in all things from art and ambiance to comic books and music.  It's possibly no coincidence that I fell in love with and married a girl from Brooklyn.  It's certainly no coincidence that my favorite American band, The Ramones, also came from New York.  New York City was and is Where It's At.

The Flashcubes came from Syracuse.  But they were a New York City band through and through, their musical DNA far more similar to that of The Heartbreakers and Television than to that of The Moss Back Mule Band.  When The Flashcubes began in 1977, the sounds of punk rock were reverberating from London to Manhattan and all points skyward, but there was no reason to believe those sounds could flourish in Syracuse.  The Flashcubes were not the first band to attempt to bring NYC to CNY--they were predated by a group called The Cuban Heels, and they were contemporaries of The Drastics, featuring future Masters of Reality frontman Chris Goss--but The Flashcubes were the ones that pulled it off.

Over time, the 'Cubes evolved into a superior power pop act, a dynamic band that emulated The Raspberries and the early Who while assimilating all of their varied influences into a distinctive rockin' pop approach that was second to none.  But they started out as a CBGB's-style punk band, albeit one covering British acts like The Sex Pistols and Eddie & the Hot Rods (and older brothers like The Beatles and Badfinger), but focusing on their own growing selection of originals. The original songs were scrappy, in-your-face, WONDERFUL numbers, encompassing Brit-slapped, American punk (guitarist Paul Armstrong's "I Need Glue," "Damaged Beyond Repair," "Got No Mind" and "Student Rape," with the latter tune standing as The Flashcubes' best-ever punk moment, aided and abetted by The.  Best.  Riff.  EVER.), NYC bop 'n' pop (guitarist Arty Lenin's "On The Run," "Tell Me To My Face" and "About Your Head," plus his nonpareil alienation epic "I Don't Want To Be A Human Being"), new wave reggae (Arty's "One More Try," probably inspired by the ascent of The Police, with whom the 'Cubes twice shared a bill in Syracuse) and unforgettable pop (bassist Gary Frenay's "Face To Face" and "Social Mobility," heretofore two of the Great Lost Flashcubes Tracks, plus Arty's "I Can't Stop Wanting You" and "Christie Girl," the latter of which would later be recorded as "Christi Girl" and released as The Flashcubes' first single).  Combine all of the above with the furious, manic drumming of Tommy Allen and an awful lot of cheap beer, and it was as if Central New York nightspots like The Jabberwocky and The Firebarn Tavern were magically transformed into Max's Kansas City.   Even a suburban hick dive like the Grape n' Grog out in Cicero was suddenly, y'know…cooler!

For a shy, pop-obsessed teenager from the Syracuse suburbs, The Flashcubes on first exposure--there's a pun in there somewhere--were everything rock 'n' roll should be:  loud, irreverent, exuberant, loud, obnoxious, loud, proud and catchy as hell.  And loud.  And how!  Just like New York City.

(How loud were The Flashcubes?  One hot summer night in 1978, my Dad picked me up after a Flashcubes show at The Firebarn.  As he pulled his car up, he noticed the incredible…NOISE coming from this little bar.  The whole place was shaking.  Later, he said that the walls of The Firebarn seemed to be expanding and contracting, like a building in a Tex Avery cartoon trying in vain to contain a raucous party in full swing.  Inside, he found me in front of the stage, jumping up and down like a Flashcubes fan oughtta.  Dad was appalled, but supportive.)

So Phil Spector had a Wall Of Sound?  Pfui.  The Flashcubes had a Wall Of Noise, melodic but deafening, often sloppy, sometimes precise, always irresistible.  The group matured quickly.  They remained loud, but they grew more accomplished and reached an entirely different sort of pop magnificence in short order.  But it's a shame that more people didn't get to know them in their earlier stages.

The Flashcubes' power-pop brilliance has been well-documented, first on the career retrospective CD Bright Lights and on the fittingly-titled 2003 studio album Brilliant.  But the group's punk side, and their New York City roots, have not yet been given proper due.  It's only been glimpsed fleetingly, on the live version of "Got No Mind" that closes Bright Lights, and with the appearance of "I Need Glue" on the live-in-Japan album, Raw Power Pop.

Let's fix that right now.  This set offers a supplemental history of The Flashcubes, served up in solid shots o' sonic bliss that channel Johnny Thunders AND Alex Chilton, Tom Verlaine AND Eric Carmen, Johnny-Joey-Dee Dee AND John-Paul-George.  It takes us from The Flashcubes' early four-track demos to the more polished sound of the 1979-80 'Cubes, when Mick Walker (briefly) stood in for Paul Armstrong.  Many of these are previously-unreleased, known only to those of us who remember when The Flashcubes knocked us down and stole our lunch money.  And we loved 'em for it.

I wish that The Flashcubes had been signed immediately, and that the group had released an album on Bomp! in 1978 and another on Sire in 1979, with many more to follow.  Those first two imaginary LPs would have included a number of the tracks on this rarities package, plus such still-unreleased (and often unrecorded) gems as Paul's "Face In The Crowd" and "You For Me," Arty's "Cycles Of Pain," Gary's "Suellen" (later redone by Screen Test), and Firebarn-tested, Jabberwocky-proved covers like "Stop!  In The Name Of Love" and "Soldier Of Love."  The Flashcubes could have, should have gone on to a long and storied career as a New York City band headquartered in Syracuse, NY.

But don't cry for The Flashcubes.  Their legacy stands and continues to expand, with new recordings and archival releases, sporadic live gigs and an increasing consensus among power pop pundits that The Flashcubes can be referred to as "legendary."  That's ultimately a more impressive resume than that of so many of their promising contemporaries in late-'70s NYC, from The Planets and The Miamis and The Laughing Dogs to The Shirts and Tuff Darts.  And consider this:  in an era of an uncertain economy, Flashcubes fans live in a time of plenty. In 1980, there were a grand total of FIVE Flashcubes tracks available to the public, a mere five songs on two 7" singles, all gathering dust in a record store bin near you.  Today, there are now two CDs of vintage material, a 2003 studio album, a live album, a CD-EP and still one or two other uncollected tracks from compilation albums, with more yet to come.  It's been one hell of a great subway ride so far.

2016 update:  since A Cellarful Of Boys was released in 2009, The Flashcubes have recorded and released another new studio album, a Roy Wood tribute called Sportin' Wood.  You can download 'em all from CD Baby, iTunes, and Amazon, and I betcha there's some physical copies kickin' around somewhere, too.
Posted by Carl Cafarelli at 4:24 AM