Unfinished And Abandoned digs deeeeep into my unpublished archives, and exhumes projects that I started (sometimes barely started) but abandoned, unfinished. I am such a quitter. 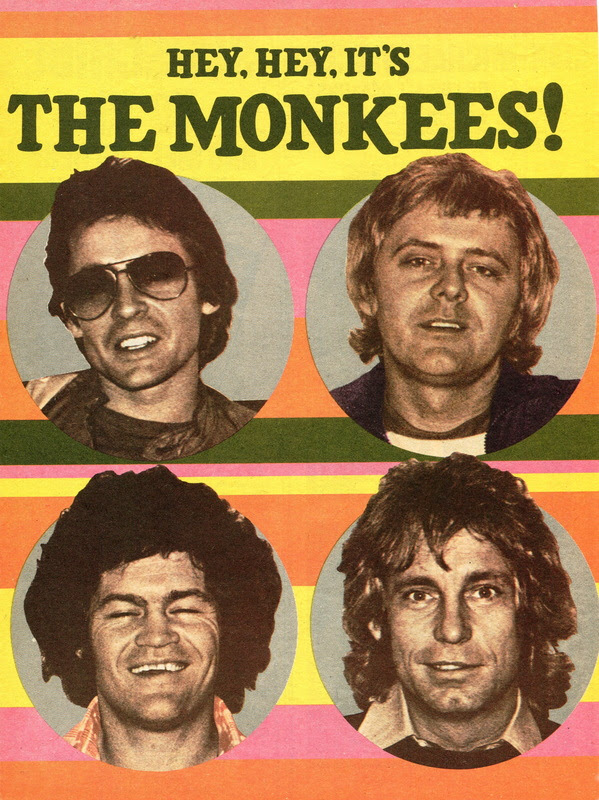 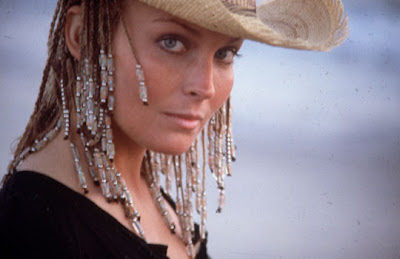 When I was a fledgling teen-aged writer, I filled notebook after notebook with vague notions of things I might like to write some day.  The Notebook Notions is a series of backwards glances at those early glimmers of almost-ideas.  In Part 1, I looked back at Catch Us If You Can, a feature film I envisioned as a starring vehicle for The Bay City Rollers.  While we're on the subject of rock 'n' roll movies, let's look at the other pop musicals languishing among my Notebook Notions. 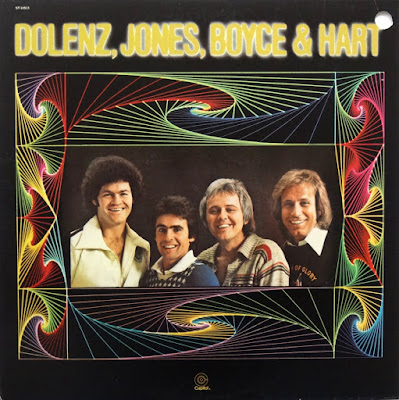 You know what?  This one doesn't even qualify as a raw notion.  I loved The Monkees (as evidenced by, oh, just about anywhere you look on this blog), so I was intrigued by any prospect of them returning to the limelight.  In 1976, it was welcome news when I heard that ex-Monkees Micky Dolenz and Davy Jones had joined former Monkees songwriters Tommy Boyce and Bobby Hart as Dolenz, Jones, Boyce & Hart (subtitled "The Guys Who Wrote 'Em And The Guys Who Sang 'Em").  I didn't actually buy their eponymous album until many years later, but I, y'know...cheered 'em on from the sidelines, I guess.  I read somewhere that DJB&H wanted to maybe do another TV series, so I got as far as conceptualizing the notably dumb title cited above. They Ain't The Beatles, But...!  Yep, that's inspiring.  It would have been The Monkees with Tommy & Bobby standing in for Michael & Peter, and also similar to the roughly-contemporary Saturday morning show The Kids From C.A.P.E.R.  Always aim high! The fact that I find this recollection more amusing than embarrassing should say something about my ongoing relative lack of shame.
-- 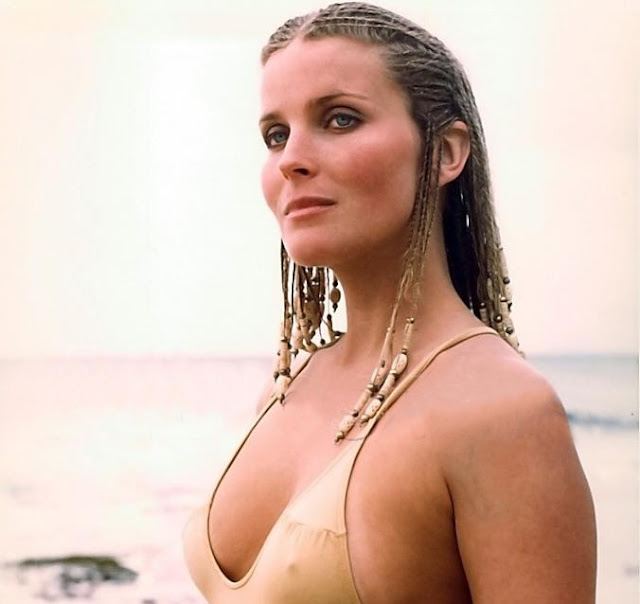 I doubt I'm alone in saying that I only liked actress Bo Derek when she was naked.  On screen, she was a vapid presence:  attractive, but empty, a pretty face with a pretty body but no discernible acting chops, no force of personality, not even any sense of earthiness or eroticism.  Even unclothed, she was an empty suit.  But she looked good; she looked good in Playboy, she looked good in the overrated, creepy film 10, and her nude assets were the only good-looking aspect of the horrible Tarzan Of The Apes remake in 1981. Pretty?  Yes.  Pretty vacant?  Also yes.

So why did I envision a fully-clothed Ms. Derek as the star of Let's Go Out Tonight!, my PG-rated rock 'n' roll comedy (with no nude scenes)?  Well, in 1980, Bo Derek was hot, and I mean that in the sense of popular-hot:  a potentially bankable box-office draw. So, when fantasizing about writing a bubbly indie-rock flick, why not imagine a hot star as its star?  I don't remember whether or not I'd yet seen 10 when I came up with the notion of Let's Go Out Tonight!--probably not--but I'm sure I figured Derek must have had some thespian skill.  The role wasn't going to quite rise to the level of Ibsen anyway; all it would require was a pretty actress who could speak, who could deliver lines, and who could be funny and likable. And yeah, it probably would have been beyond Bo Derek's reach.

I was dying for there to be more rock films the way I wanted rock films to be.  I wasn't looking for concert films or documentaries; I wanted flicks like A Hard Day's Night, Help!, like The Ramones in Rock 'n' Roll High School, and like The Monkees on TV or in Head.  I was bummed when The Sex Pistols broke up before completing Who Killed Bambi?, and The Runaways split before even starting We're All Crazy Now! There was a then-recent film called Times Square, a Robert Stigwood production that was supposed to do for punk/new wave what Stigwood's Saturday Night Fever did for dat ole debbil disco, but I never saw it, and I heard that it was devoid of spark or joy anyway.

Unlike previous celluloid pop-star vehicles for The Beatles, Herman's Hermits, The Monkees, The Dave Clark Five, and The Ramones, Let's Go Out Tonight! would draw inspiration from the very first great rock 'n' roll movie, the 1956 classic The Girl Can't Help It.  I probably hadn't seen that film yet, but I knew its reputation, and its basic template of a frothy pop storyline--a romantic comedy--interspersed with performances by actual rockin' pop recording acts.  It was the same bare-bones structure followed by many a low-budget teen jukebox flick thereafter, but I wanted Let's Go Out Tonight! to be good, like The Girl Can't Help It, and authentic and engaging in ways that Ski Party and Get Yourself A College Girl could never be.

That's what I wanted, anyway; I didn't have the talent, or the experience, or the know-how, or the discipline, or the connections, or the backing, or the money, or anything at all that could make it happen, but that's what I wanted.

But I did have the film's opening scene sorta-kinda blocked out in my head:  the sun has gone down in the Syracuse suburbs.  Inside a lovely split-level home, voices are raised: If you think you're going out dressed like that, young lady, you've got another think coming! Objects fly.  A vase shatters against a wall. A cheery-seeming teen-aged girl listens politely as her mom and dad vent their anger and frustration with their impossible daughter. You're grounded, do you hear?  GROUNDED!!  The girl replies with a pleasant Okey-dokey!, then kisses each of her parents on the cheek.  'Night, Mom! 'Night, Daddy!  She goes upstairs to her room, closes the door, and--without pausing--crawls straight out her window, shimmies from the roof of the house down to the next door neighbor's yard.  She passes her neighbors, an elderly couple named The Shapiros, who seem undisturbed by her seemingly unorthodox arrival in their yard.  Hi, Mr. and Mrs. Shapiro!  Lovely evening, isn't it?  The Shapiros smile and say, Good evening, Tina.  Any big plans tonight?  Tina shrugs, Nah, just the usual.  The Shapiros' Mazel tov! is implied, if not spoken.  Tina reaches the street and jumps into a crowded '69 Impala, already stuffed with a mixed-gender half-dozen of Tina's pals.  Whaddaya wanna do tonight, Tina?  And a close-up of Tina as she says, Let's go out!

And cut to The Most, a Syracuse rock 'n' roll band of that era, live in a nightclub, singing the movie's title song:  Come on all you little girls and boys, let's all go out tonight!  The opening credits roll, and we're on our way. 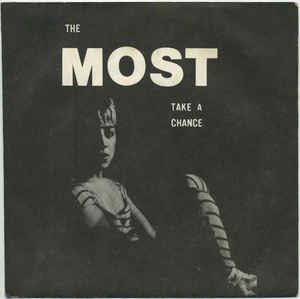 Since that was as far as I ever got with this notion (and far more than I've ever previously committed to the written word), I have no idea what part I wanted Bo Derek to play.  She seemed too old for the role of Tina, and I doubt I saw her as Tina's mother. Maybe a club owner, or a band manager?  Ah, who cares?  She would have been pretty, the storyline would've been breezy and fun, and we'd get to see cameos by The Most, The Flashcubes, The Ramones, David Johansen, Josie Cotton, The Records, The Beat, The Heartbreakers, and--why the hell not?--The Monkees, playing their hits as Tina finds the boy of her dreams and her parents loosen up a bit.

Looking back now, Let's Go Out Tonight! almost seems like a precursor to both Ferris Bueller's Day Off and Valley Girl, crossed with Rock 'n' Roll High School and, God help me, a less stodgy version of Grease.  It's not a movie I could have ever actually written, but it's for damned sure a movie I wish I could see right now!
-- 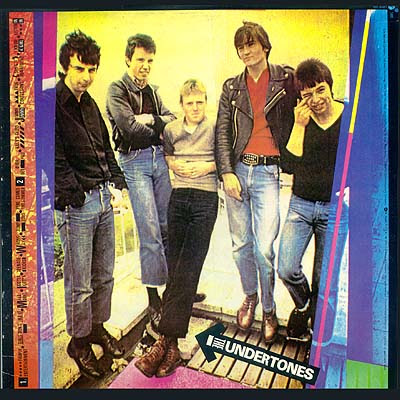 Jump Boys:  A Pop Musical In Times Of Trouble

Another raw not-quite-notion.  I loved the Irish rock 'n' roll band The Undertones, particularly their eponymous debut album.  That album included the classics "Teenage Kicks" and "Get Over You," but I gravitated especially to an album track called "Jump Boys." I listened to that album and that song over and over, and I imagined The Undertones in a movie set in Northern Ireland, detailing a star-crossed romance between a Catholic boy and a Protestant girl. The issue of difficulties caused by religious differences resonated with me, since I had recently embarked upon an interfaith romance myself (though, I hasten to add, a romance without any of the potentially violent peril of Catholics and Protestants mingling in the time and place of The Troubles).  I think I lack the intellectual depth to do the subject justice, and that I would have oversimplified things to a near criminal degree.
--
And that was the full extent of ideas for pop musicals in my Notebook Notions. Many, many years later, I did have two other projects I kicked around as prose works that could be adapted into film.  One of these, Meet The Frantiks, got as far as a hand-written introductory chapter; another, Bright Lights, is something I've started, abandoned, and come back to several times.  These are subjects for another day.

WHEN NOTEBOOK NOTIONS RETURNS:  If The '70s Were The '40s!  Movies, movie serials, comic books, and radio shows, with The Marx Brothers, Captain Marvel, The Lone Ranger, The Justice Society of America, and Charlie Chaplin.

Posted by Carl Cafarelli at 9:49 AM