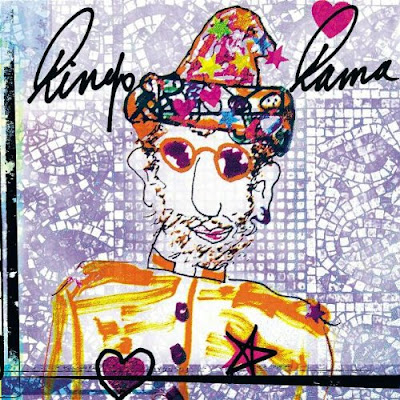 Ringo Starr was kicking off a new All-Starr Band tour in Ontario, and I was offered press credentials.  At the time, I was nearing the end of my association with Goldmine magazine, though I continued freelancing for Goldmine (with decreasing frequency) until 2006; I had a vague notion of writing a piece on Ringo for Goldmine, but it probably wasn't likely.  I toyed with the idea of expanding my notes into something larger, but it never seemed like anything really worth fleshing out, honestly.

But it was a thrill.  My This Is Rock 'n' Roll Radio co-host Dana Bonn and I piled into my '96 Cavalier, and we made the five-hour (and change) drive to Rama, Ontario.  We got pulled over at the border, because the nice border patrol lady was suspicious of two American forty-somethings headin' to Casino Rama with a mere forty bucks between us.  The border guards who searched my car joked about "the bitchy lady" who'd flagged us as ne'er-do-wells, and sent us on our way.  The late-evening drive seemed to take forever, as we passed Toronto and Canada's Wonderland, and finally made it to a cheap hotel to crash for the night.  Ringo's press conference was early the next morning.  These are my notes from that press conference.

For this year's All-Starrs, Ringo Starr, musical director Mark Rivera (best known as Billy Joel's longtime sideman) and returning drummer Sheila E are joined by Paul Carrack (of Ace, Squeeze, and Mike and the Mechanics), Colin Hay (of Men At Work), and John Waite (of The Babys, Bad English, and several solo hits).  Ringo is touring on behalf of his own current solo release Ringo Rama (Koch Records), a solid album of agreeable, post-Beatle pop music that is nearly on a par with his definitive solo album, 1973's Ringo.

After promoter David Fishof introduced each of the other All-Starrs, Ringo Starr himself took the stage, flashing peace signs, wearing a long-sleeved black shirt with  "Summer Music Love Enjoy" emblazoned on its front.  Joking that "Morning's the best time for musicians," Ringo led the All-Starrs through a brief, teasing taste of "With A Little Help From My Friends," ending after the first chorus, declaring, "Okay, that's all you're gettin'.  That's all you're gettin' this morning; come back tomorrow!"  With that, Ringo left the front of the stage and took his place at his drum kit for a medley of All-Starrs tunes, beginning with his Beatle-vintage cover of The Shirelles' "Boys," followed by Paul Carrack's Ace hit "How Long," Colin Hay's Men At Work signature "Who Can It Be Now,?" John Waite's solo smash "Missing You," and Sheila E's "A Love Bizarre," concluding with a short but smashing drum solo from Sheila E.

With the concert preview concluded, the band opened the floor to questions.  Not surprisingly, the vast majority of questions were for Ringo, whose status as the former drummer for the most popular and influential rock 'n' roll group of the 20th century tends to over-shadow just about anyone else he plays with.  Asked if the fact that he was touring at the same time that The Rolling Stones were getting set to headline a huge concert in Toronto was a sign that nothing had really changed since the 1960s, Ringo immediately said, "No, a lot has changed since the '60s; it just means the Stones are still at it, and so am I.  Life goes on, and this is what we do...I'm a musician and I love to play.  The dream, to play drums and to play with good players, still carries on and it's still happenin' to me.  I still get the chance to play with all these good players."

There was a line of journalists and media queued up before a microphone, each waiting our chance to ask a single question apiece.  The man in front of me turned out to Bob Segarini, a musician I knew from his work in the '70s as a member of The Wackers, and as a solo artist whose Gotta Have Pop album was a fave rave.  I introduced myself to him after the press conference, and we compared notes about our respective, similar radio formats.

When it was my turn, I asked Ringo and the All-Starrs, "Ringo, once again you've assembled a stellar line-up of All-Starrs.  I wonder, what is your process for selecting performers to join you as All-Starrs?  And do you think there would ever be room in an All-Starrs show for some deeper tracks, something beyond just the biggest hits?  For example, I'd love to hear something like John Waite singing The Babys' "Isn't It Time," which wasn't as big a hit, but it was a good song.  Is there room for that sort of thing in an All-Starrs show?"

Ringo replied:  "No, it's the hit show.  I mean, the criteria is that you play an instrument and you have hits.  And that was the format in '89, and it's still the format.  And so, we look at that.  Some people get in touch with us because they're interested, and we get in touch with other people, and then it just sort of works out.  We have to say, 'Oh, we need a bass player, we need guitar, we need piano.'  We always need another drummer because I do half the show.  It just sort of forms itself.  There's no big headache or panic; we're not always spoiled for choice, but we've always got enough choice.  I'm always pleased when we come to the selection, and the guys and the lady say, 'yes.'  At the end of this tour I'll say, 'I'm never touring again'--again.  And then, by November, I'll be sayin', 'Um-- anybody call, David?'"

The rest of my notes mention a few other answers Ringo gave to reporters.

On The Royal Family:  "I don't think they're much use anymore.  Can't be clearer than that, can I?"

On popular music:  "Music keeps evolving.  When I started playing, I started [in] skiffle, then it went to rock, then it went to pop, and now it's rap and then it's garage.  There's so many categories now that I don't really know them.  I have to talk to my granddaughter about that."

On dealing with losing his role as Thomas The Tank Engine on the TV series Shining Time Station:  "Well, it was bad.  I went into hibernation for several years.  And I dragged myself out of that hole by puttin' the first All-Starrs together."

On the question he's most sick of hearing reporters ask:  "'How's Paul?'"

The press conference ran its course.  There would be no autographs or one-on-one opportunities--no surprise there--so we all adjourned for brunch (coffee and a bagel with lox for me).  Dana and I had to head back to Syracuse--we would not be able to stay in Rama for Ringo's actual show--so it was time to hit the road.  We traveled over five hours each way just so that I could ask one single question of one of The Beatles.  That's a lot of fuss, a lot of effort, for such a fleeting experience.

Was it worth it?