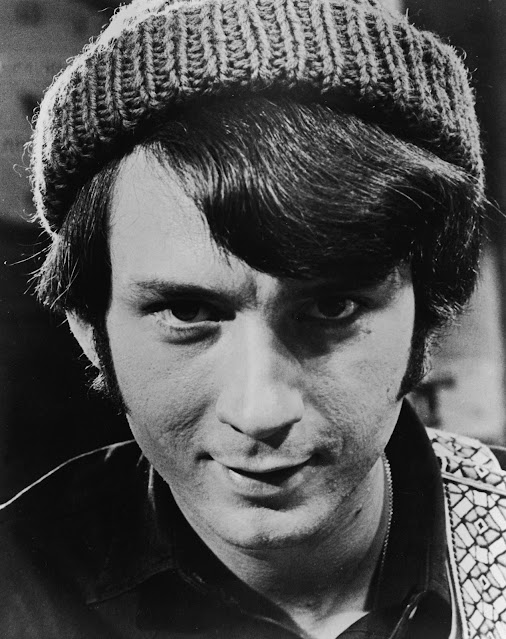 "Wool Hat." The producers of a TV show wanted to call him "Wool Hat."

Michael Nesmith would have none of that.

Nesmith had been cast alongside Davy Jones, Micky Dolenz, and Peter Tork as the co-leads of a weekly TV sitcom. They played a fictional group called the Monkees. The fact that these made-for-TV Monkees also became a real-life group was thanks in no small part to Nesmith's stubborn determination. It would be a mistake to give Nesmith a disproportionate amount of the credit here--each of the four Monkees was integral to the process of transcending limitations, of making the Monkees matter--but there's simply no way in hell it could have happened without Nesmith's own strong will as catalyst.

"Wool Hat?" Please. The name was Michael. Michael was the one who brought his laundry with him to his audition, the one who immediately insisted that this (originally) prefab project include songs he'd written, and that he be the one to produce the sessions for his songs. When the Monkees began to seek some measure of autonomy, to play on the records that bore their name, it was Michael who responded to corporate resistance by putting his fist through a wall, looking a suit square in the eye, and warning, "That could have been your face."

(Nesmith added a multi-syllable word at the end of that statement, but decorum suggests we only reveal that the word started with "Mother.")

The make-believe Monkees became real. We can't say that was all Nesmith's doing, because it wasn't. But nor can we imagine that sequence of events without him. And his fist.

Of course, Nesmith was more than merely ("merely...?!") a Monkee. He was a songwriter, a musician, a producer, a visionary, an entrepreneur, a businessman, an author, a dreamer, a realist, a personality, a person. Darkened rolling figures move through prisms of no color. He wrote Linda Ronstadt's first hit. He invented the concept of MTV. He was the recipient of the first-ever GRAMMY Award for a video album. He was the only member of the Monkees to have a U.S. Top 40 single outside of the Monkees' aegis. He ran a company. He produced videos and films. He wrote books. He was respected. He was admired.

And he was also a Monkee. Perhaps he was once a reluctant Monkee, but he came to understand, to accept, and to appreciate the fortune he found beneath a wool hat. Weren't they good? They made me happy. That would have been enough. But he gave us more. Rising, rising, rising up again. We tip our own wool hats in tribute, and in gratitude. Godspeed, Michael Nesmith. Here's to the beat of a different drum.

This Is Rock 'n' Roll Radio with Dana & Carl airs Sunday nights from 9 to Midnight Eastern, on the air in Syracuse at SPARK! WSPJ 103.3 and 93.7 FM, and on the web at  http://sparksyracuse.org/ You can read all about this show's long and weird history here: Boppin' The Whole Friggin' Planet (The History Of THIS IS ROCK 'N' ROLL RADIO).