LOST IN THE GROOVES: The Ramones' SUBTERRANEAN JUNGLE 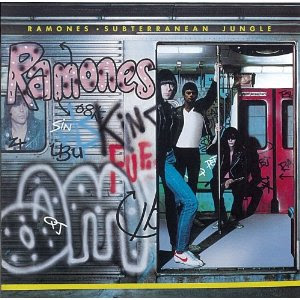 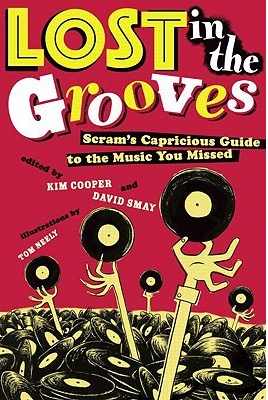 I've written several times here about the 2001 book Bubblegum Music Is The Naked Truth, edited by Scram magazine's Kim Cooper and David Smay. I was so, so happy to have been involved with that book, and I've been delighted to re-present my contributions here on Boppin' (Like The Hip Folks Do). They're all but a click away: my Bubblegum History, my Bay City Rollers piece, and my debate with Gary Pig Gold on whether or not The Monkees were ever really a bubblegum group. I've also posted my proposed Bubblegum Music Is The Naked Truth audio companion, and even my fake This Is Rock 'n' Roll Radio playlist/appreciation of David Smay's fictional group, The Daisy Bang. When it comes to Scram, I'm a fan!

So when Kim and David asked me to contribute to their next book, I was all for it. That book was Lost In The Grooves in 2005, billed as "Scram's capricious guide to the music you missed." It was a collection of short essays about underrated, under-appreciated, or otherwise unjustly neglected albums. I think I proposed a bunch of potential albums I wanted to write about (including the [post-Bay City] Rollers' 1979 work Elevator), but was given the go-ahead for but a pair: Tell America by Fools Face, and Subterranean Jungle by The Ramones.

(I recall having to convince Kim about including a Ramones album in Lost In The Grooves. "The Ramones aren't underrated anymore, Carl," she said. "Maybe not," I replied, "but this album is!" She ceded the point, and I got to work....)

The Ramones' seventh album, Subterranean Jungle is the most underrated work in their Carbona-huffin' canon. It is the only one of The Ramones' post-'70s works that fully embraces the trash-pop, bubblegum aesthetic that made the first four Ramones albums such enduring classics; yet it was the first original Ramones album to be deleted. And its follow-up, 1984's far-less-bouncy Too Tough To Die, wound up being hailed (falsely!) as The Ramones' return to greatness.

The Ramones wanted to be a bubblegum band, a faster and louder version of The Bay City Rollers and The Ohio Express. With '60s bubblegum vets Ritchie Cordell and Glen Kolotkin producing, Subterranean Jungle opens with a cover of The Music Explosion's "Little Bit O' Soul." (A fab cover of The 1910 Fruitgum Company's "Indian Giver" was also recorded, but appeared as a non-LP B-side.) A seemingly incongruous cover of The Chambers Brothers' psychedelic soul touchstone "Time Has Come Today" defies expectations and simply soars. And Dee Dee Ramone's misfit themes "Outsider" and "In The Park" (the latter song inspired--go figure!--by trips to the park to cop heroin) transcend their origins and emerge as triumphant, fist-pumpin', bubblicious delights.

It's not all bubbly. While Joey yearns for "Somebody Like Me" and "My-My Kind Of A Girl," Dee Dee's badass "Time Bomb" warns he's gonna kill his mom and dad, and Dee Dee and Johnny's "Psycho Therapy"--ultimately the album's best-known track--is an audio slasher flick, with a horror-film video banned by the weasels at MTV. Behind the scenes, Marky Ramone was fired from the band during the making of the album; the cover graphics show him clearly apart from the rest of The Ramones, looking out a subway window, a brudder-in-arms no more. This was the last great Ramones album, a bubblegum punk classic, and no one seems to appreciate it. Maybe that time has come today.

I still like Subterranean Jungle more than any other Ramones studio album released after 1978's Road To Ruin. (I specify studio album because 1979's It's Alive! is my all-time favorite live record.) I'll post my Lost In The Grooves essay on the great Fools Face album Tell America some time soon. And if the good folks at Scram ever decide to do another book, I think they know where to find me.

Oh, by the way: Lost In The Grooves is a cool little book, with or without me, and copies are still available over on the Amazon thing.  In the immortal words of Jack "King" Kirby: "Don't ask why--just BUY!"

Posted by Carl Cafarelli at 9:01 AM