LOST IN THE GROOVES: TELL AMERICA by FOOLS FACE 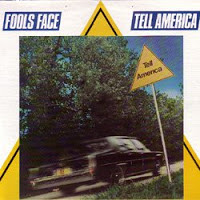 I wrote here about my contributions to a 2005 book called Lost In The Grooves, a collection of short essays billed as a "capricious guide to the music you missed." We've already seen what I had to say about The Ramones' Subterranean Jungle album; this was my other entry in Lost In The Grooves:

Based in Springfield, Missouri, Fools Face earned raves in the pages of Trouser Press and Creem, but remained criminally unnoticed by the general public. Even interested parties have had a hard time actually buying a damned Fools Face record. To this day, I own the only copies I've ever seen of the group's three elusive LPs, plus a bootleg CD-R of the final cassette-only release, The Red Tape.

Within the pop underground, however, Fools Face is renowned. For me, the moment of revelation came via the first track on the group's second album, Tell America. "American Guilt" is an acid-tongued critique of both gung-ho Reagan-era jingoism and mushy-headed neo-hippie naivete, lyrically as incendiary as a testimonial from The MC5, but with a perfect pop sheen. When the chorus soars with the lines, "When push comes to shove/All you need is love," the transcendent effect of the Beatles quote nails everything into place.

By turns confident and vulnerable, Fools Face was always literate, intelligent, musically accomplished, rooted in '60s songcraft but forged in the crucible of '70s punk and new wave. The individual tracks make the case: "Nothing To Say" is the best break-up song ever, encompassing casual heartache (or heartlessness?) and a matter-of-fact recognition of the need to just move on; "Land Of The Hunted" and "Stand Up" compress paranoia and determination into an irresistible 1-2 punch; "L5" even manages a compelling pop tune about space colonization.

Many fans prefer the group's third album, 1983's just-as-wonderful Public Places, though few will speak on behalf of Here To Observe, the merely okay 1979 debut. As a happy postscript, the original quintet returned for a splendid reunion CD in 2002, an album that lives up to the promise of Tell America and Public Places. Tell...someone!

POSTSCRIPT: That eponymous 2002 reunion disc was joined on the retail shelves by a vintage live performance, released under the title of Live At Last. Good luck finding any of it.

While you may not be able to track down any Fools Face albums or CDs, you can still get a copy of Lost In The Grooves via Amazon. Watch this space for one more unpublished Lost In The Grooves piece in the near future.
Posted by Carl Cafarelli at 9:02 AM