A Thousand Points Of Bright Lights 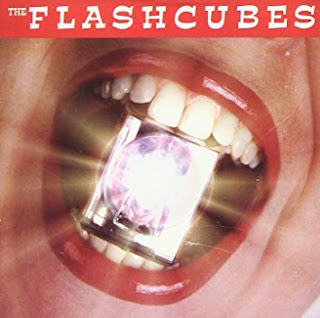 I've been proclaiming the virtues of Syracuse's own power pop powerhouse The Flashcubes for decades, ever since I first saw 'em live, upstairs at a Syracuse University bar called The Orange on January 28th, 1978. In every pop music forum I've ever had, from snail-mail correspondence and mix tapes through on-line groups, my freelance writing for Goldmine, and now this daily blog, I've never passed up a chance to mention that The Flashcubes have always been--and will always be--one of my all-time favorite rock 'n' roll groups. I've also spoken and written at length about the local Syracuse scene that erupted around The Flashcubes in the late '70s and early '80s, a scene that buzzed with so many great combos deserving of much greater notoriety.

In recent years, my sheer, stubborn obstinance has kind of made me the highest-profile cheerleader for The Flashcubes and that Syracuse scene, a scene we now refer to as "the Bright Lights! era," so named after the 'Cubes' first CD anthology, and subsequently the name we gave to our occasional live Syracuse new wave reunion shows. I'm a famous local hero! (And, if you get that reference, well, you're my kinda somebody.)

But, glory-hound though I may be, I have never been the only one out there talking about the brilliance of The Flashcubes, Screen Test, The Ohms, 1.4.5., Dress Code, The Penetrators, The Poptarts, et al. There were others before me, and there are still others now. My favorite writer in this 'Cuse-centric field is Bill Holmes, who has written so eloquently about pop music under the heading of Dr. Bristol's Prescription; much of Bill's work is archived here, and I would dearly love to see him add to these pages. Though not a Syracusan, noted pop journalist John M. Borack was, to my knowledge, the first scribe to ever write about The Flashcubes in Goldmine; Jordan Oakes covered the 'Cubes in the pages of his fondly-remember pop zine Yellow Pills, Patrick Pierson often discussed the 'Cubes in his also-fondly-remembered magazine Yeah Yeah Yeah, and Ken Sharp interviewed The Flashcubes for Play On! Power Pop Heroes, his essential, multi-volume series of books chronicling the history of power pop. And there have been still more others, as well, continuing to cast a bright light upon our memories of an exciting time and an exciting sound. 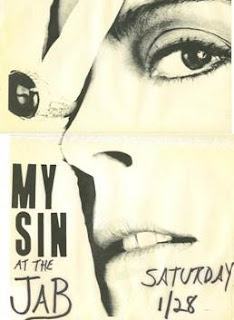 John Tierney is one of these guys. John's relatively new blog Long-Winded Short Attention Span recently posted his terrific reminiscence of My Sin, an early '80s Syracuse group fronted by the inimitable B.D. Love. Previously, John also posted a great piece on The Trend, a fab early '80s teen combo that was our scene's first notable tragedy. In both of these pieces, John's love, respect, and passion for the scene shine like a cop's flashlight blindin' your eyes when he discovers you 'n' your special someone doin' the jumping jack in the back seat of a '69 Impala parked along Onondaga Lake Park circa 1979. I love rock 'n' roll writing that isn't afraid to love. Detachment? Cool appraisal? Pfui. You're looking for the hipsters, and they ain't here. John's stuff--like my stuff, and like almost all of the rock writing I ever adored--proudly wears its heart on its sleeve like a big ol' Undertones badge. It's a blast to read, and it conveys the sense of excitement that made us love rock 'n' roll in the first place. Go to John's blog. Tell 'im CC sent ya. And encourage him, beg him to write more.

This year will mark the 40th anniversary of The Flashcubes, who played their first gig on September 1st, 1977. I hear there are big things brewing to celebrate this milestone. I know that The Flashcubes have just finished recording a brand new track (with Mark Hudson of The Hudson Brothers on backing vocals); the song is a very cool cover, it sounds terrific, and I don't think I'm allowed to say anything more about it at this time. (I've gotten away with dropping two hints: More Of The Flashcubes, and "HEY!") For all I've already written about The Flashcubes, it's a safe bet that I'll still have much more to say in this 40th anniversary year.

And I betcha I won't be the only one writing about 'em, either.

Our new compilation album This Is Rock 'n' Roll Radio, Volume 5  has been released. You can buy the CD here and the digital downloa... 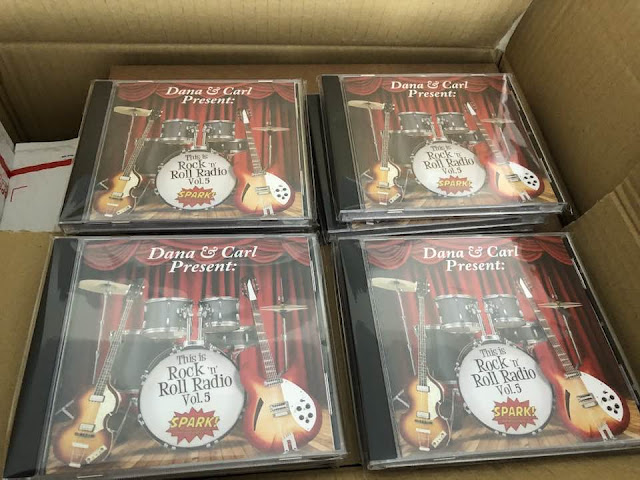