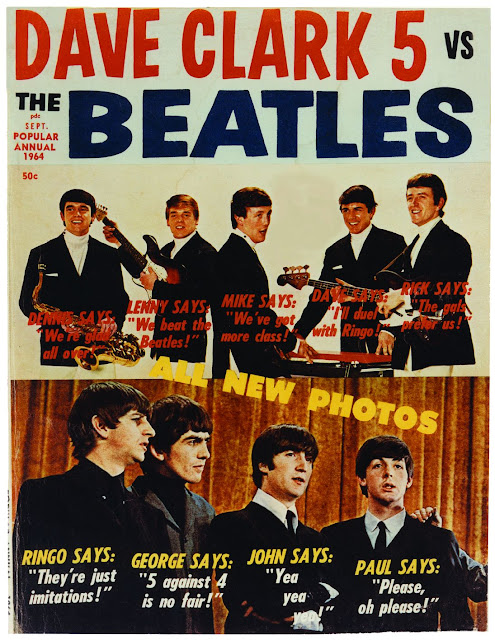 The Beatles were a competitive lot. By 1964, the illusion of their seeming overnight success almost concealed the drive that had already gotten them this far on their path to the Toppermost of the Poppermost: the years of anonymous effort, the endless flow of sweat and adrenaline (and amphetamines) as they rampaged through set after set after ferocious, dripping set in dive bars before drunken audiences of German art students, hookers, thugs, and punters shouting for this British punk band to play faster, play louder, and Mach Schau!  The Beatles cleaned up well; looking at them in the heady days of early Fabmania, with their matching suits and cute, mopheaded hair-dos, and seeing them charm the world with their wit and clever guile, you might not notice the grease and grime and grit just beneath the surface. It was hidden from the photographers' flash. But it was still there.

Success breeds...well, if not exactly contempt, it breeds an eagerness among the jealous and the smug to see you brought back down to their unexceptional level. The Beatles are Number One!, they would say. But for how long? Nonetheless, if you were willing to fight your way to the top, you were damned well willing to fight for your right to stay there.  The Beatles were more than willing. And now that they held this gaudy brass ring within their grasp, The Beatles were not about to let it go. 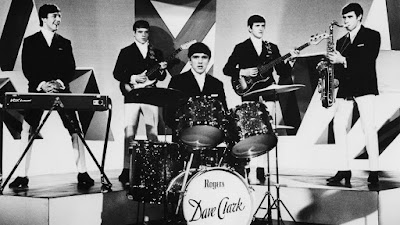 Looking back, many chuckle at the notion of The Dave Clark Five ever being considered a serious challenge to The Beatles. Hindsight is deceptive; in late '63 and into 1964, few believed The Beatles could ever amount to much more than the fad du jour, and if you'd said that The Beatles would be remembered--celebrated!--more than five decades later, you'd have been deemed a freakin' lunatic. So, if the kids went crazy for this Mersey Beat nonsense purveyed by those Beatle chaps, why wouldn't they go equally ga-ga over the Tottenham Sound of The Dave Clark Five? 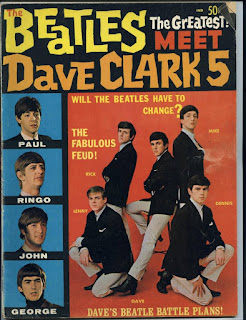 Of course, "the Tottenham Sound" was a complete fabrication, even more of a mirage than the much-hyped Mersey Beat (which at least had some flimsy foundation in fact). But no matter: the DC5's best records were explosions of gimmicky, thumpin' oomph, designed to destroy transistor radio speakers, the resultant debris mere collateral damage inflicted en route to a football match. DC5 records--"Do You Love Me," "Glad All Over," "Bits And Pieces"--rocked. It may seem a quaint concern now, but when music tabloids heralded "Glad All Over" dethroning The Beatles at # 1, The Beatles had a potentially ample reason to quake in their Cuban heels. 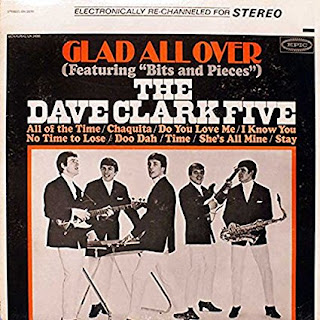 (Stop saying it's absurd. I guarantee you The Beatles didn't think it so absurd at the time.) 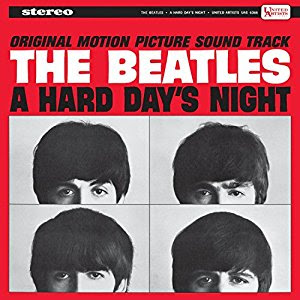 In 1964, after The Beatles had reclaimed the colonies for the British crown (and the DC5 had followed as the first British group to tour the U.S.), Lennon and McCartney put their shaggy heads together to concoct some new Beatle tunes for their feature film debut in A Hard Day's Night. This movie would ultimately help to solidify The Beatles' preeminence in pop culture, and provide the first tentative evidence that maybe these long-haired limeys might just possibly last a little longer than anyone predicted.

But that hadn't happened yet. So John and Paul toiled away, preparing their next volley in the rock 'n' roll wars. "A Hard Day's Night," "And I Love Her," "I Should Have Known Better," "If I Fell," and "Can't Buy Me Love" were peerless pop tunes from the get-go, the George Harrison-sung "I'm Happy Just To Dance With You" was an engaging throwaway, and "You Can't Do That"--written and filmed for A Hard Day's Night, but unused in the movie--was likewise another piece of a freshly-completed, delightful and irresistible package. If anyone saw the DC5 as competition for The Beatles, they wouldn't think so for much longer; The Beatles were just about set to blow everyone--everyone--else away.

Er...except that we've left out one more song John and Paul concocted for A Hard Day's Night.

"Tell Me Why" is an anomaly in The Beatles cavalcade o' gold. Not because it's a bad track--it's pretty cool, actually--but because it doesn't sound like a Beatles record. This is, itself, not unique, I guess; one could argue that The Beatles' cover of "Till There Was You" from The Music Man doesn't sound like a Beatles record, either. But this was something different altogether. On "Tell Me Why," the roll of the drums, the overall pumping of the rhythm, the vaguely U.S. Marine-like sound-off at the close of the middle eight, all point to one inescapable conclusion:

With "Tell Me Why," The Beatles had made a Dave Clark Five record. 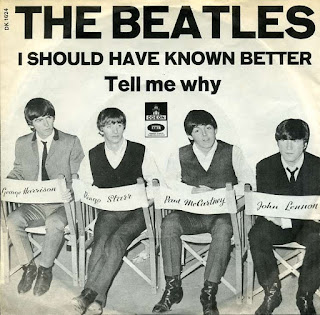 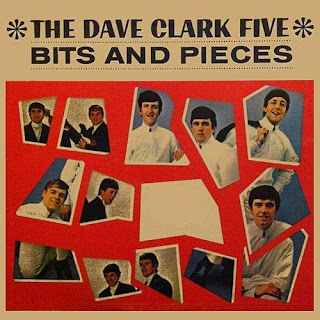 It may not have been intentional, though I betcha it was; The Beatles were competitors, through and through, and I can't see them accidentally aping the DC5 in any real-world circumstances. It's not a copy of any specific DC5 record; it kinda calls to mind "Bits And Pieces" in a very general way, but it's more of a distillation of that supposed Tottenham Sound, just as The Knickerbockers would later distill frenzied Beatlemania in their hit "Lies." It's a final shrugging off of the DC5 as competitors; The Beatles were acknowledging, and moving on.

In the late '70s, National Lampoon published an all-Beatles parody issue. I wish I still had my copy--I'd replace it if people didn't want so damned much money for it now--but I recall a section of it that mocked the breathless fave-rave hype of mid-'60s teen mags, and included this exchange between these two rival bands vying for the pop-rock pound or dollar:

BEATLES: There's a place where you can go.

While I never stopped loving The Dave Clark Five--I'm one of a relative few who will speak favorably of the DC5's film Having A Wild Weekend, and we'll be discussing a particular Dave Clark Five track in a near-future edition of The Greatest Record Ever Made--it was soon abundantly clear that they couldn't really compete with The Beatles.

Still, for a very brief moment in time, The Dave Clark Five did compete with The Beatles, and at that time it really wasn't immediately clear who would win the battle. The DC5 fought; The Beatles fought back, and one of their weapons was a song that just happened to sound an awful lot like their rivals. Here's to the Tottenham Sound of The Beatles. 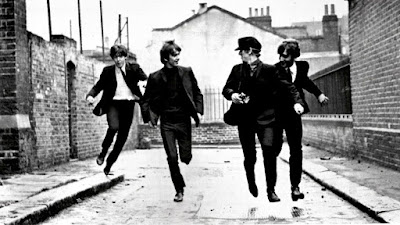 You can support this blog by becoming a patron on Patreon: Fund me, baby!
Posted by Carl Cafarelli at 5:47 AM