LOVE AT FIRST SPIN: Drop Out With The Barracudas

Love At First Spin looks back at albums that I immediately loved, from start to finish, the first time I heard them. The concept was suggested by Steve Stoeckel, and was detailed here. 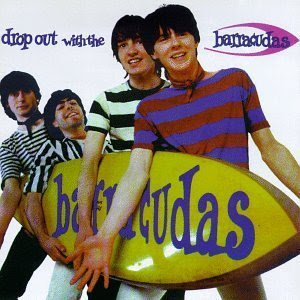 THE BARRACUDAS: Drop Out With The Barracudas (Voxx, 1981)

Let's get this straight from the get-go: Drop Out With The Barracudas is my favorite album of the 1980s. I loved this record, all the way through, from the first moment I heard it, and my opinion has not changed with the passing of decades. It is the ideal choice to begin this new series of Love At First Spin.

Although the album was released in 1981, I didn't hear it until some time in 1983. I was living in Buffalo, and my girlfriend and I decided to take a trip back to Brockport, the little college town where we'd met and lived for a while after graduation. No trip to Brockport was complete without a visit to Main Street Records, the terrific little shop run by Bill and Carol Yerger, and we couldn't have an incomplete trip to Brockport now, could we?

As a punk and power pop devotee, I was already a fan of the Bomp Records label; by '83, I was also a burgeoning garage aficionado, and therefore growing quite keen on Bomp's Voxx label, which seemed to specialize in '60s-inspired fuzzpunk 'n' jangle. I had probably seen The Barracudas mentioned somewhere--perhaps in the pages of Trouser Press--so spying the LP on the shelf at Main Street was sufficient providence for me to part with a little cash in exchange for an album I'd never heard, but was nonetheless certain I would like.

We also stopped in, unannounced, to visit our friend Jeff, a former co-worker from my days at McDonald's of Brockport. Jeff was...uh, entertaining a very attractive young lady when we arrived at his house, so clearly we shoulda had the decency to call first. Nonetheless, Jeff welcomed us, and we stayed for a little bit before hightailin' it outta there, leaving those two to whatever it is a young adult boy and a young adult girl do together when they have the house to themselves.

But before we left Jeff's house, we listened to the first track on this Barracudas album. The crashing, hyperactive intro of "I Can't Pretend" filled the room, and I was smitten. Yep, we'd best let Jeff and friend get back to what they were doing; it was time to shuffle back to Buffalo.

This brief, awkward mix of inopportune timing, inadvertent hubris, and a teasing taste of rampagin', irresistible rock 'n' roll riddum was my introduction to the glory, the splendor, and the wonder of The Barracudas. Back at my apartment in Buffalo, it was time to experience the rest of the record.

Drop Out With The Barracudas is divided into a Down Side and an Up Side.  The Down Side commences with the exuberant kiss-off of "I Can't Pretend," then careens into the fatalism of "Violent Times." "Violent Times" would be, like, open-a-vein depressing if it weren't so damned catchy. We're living in violent times? We're all gonna die? Horribly? Awright! The song isn't some nihilistic punk diatribe, but instead a folk-rock litany of all the things than can (and probably will) go wrong, each leading inevitably to our own messy demise. All these wrong things sound so right with Byrdsy guitars chimin' away. Stayed in all day, I was scared of getting killed. Abject fear never sounded better.

The square-peg clarion call of inadequacy "Somebody" follows, and flows into Buffy St. Marie's harrowing "Codeine," the album's only cover. The weight of the world then prepares to crash down upon a hapless everyday Atlas in "This Ain't My Time," and the future looks mighty bleak.

And then, in the midst of this despair, The Barracudas offer an unexpected light, a glimmer of--can it be?!--hope.

"Somewhere Outside" is a casually stunning track. I'm looking everywhere, trying to find a way/Before the dark clouds cover up what's left of the day. More Byrdchimes, another dystopian tableau, but now an incongruous, sudden determination, a feeling that we can fight back against the nether forces assailing us. We may still lose the battle, but the agents of misfortune will at least know they were in a hell of a tussle. Alas, hope surrenders in "I Saw My Death In A Dream Last Night," the Down Side's closing track. This is the end, no goddamned friend, the end.

Imagine if Big Star's "Holocaust" had been a toe-tapper. Think of the life-affirming effect of The Beach Boys' "'Til I Die," in spite of its downbeat lyrics. Picture Barry McGuire's everything-sucks anthem "Eve Of Destruction" delivered as catharsis rather than complaint. That's the cumulative effect of the Down Side of Drop Out With The Barracudas. And man, are we ever ready for the Up Side!

The Up Side fully embraces goofiness at its start, with The Barracudas' sprightly UK hit "Summer Fun." "Summer Fun" begins with a snippet of a 1960s radio commercial for the Plymouth Barracuda (as the announcer stoically but comically concedes that he "can't pronounce 'Backaruda'"). The supercharged, over-the-top surfin' pop of "Summer Fun" explodes from the speakers, produced by bubblegum vet Kenny Laguna (shortly before his long association with Joan Jett), a veritable full-body shot of adrenaline and amphetamines cruisin' at full speed, beach-bound and fancy-free. Up Side, indeed!

Ah, but we should have known better than to trust these guys, right? The Barracudas break the perceived promise of the Up Side on its second track, the suicide saga "His Last Summer." It was his last summer, and it made us think/We stopped surfin' and started to drink. I believe I snorted with gleeful laughter the first time I heard that line. As much as I already loved every track I'd heard on the album up to that point, this is what sealed the deal for me. When I heard "His Last Summer," I knew right then and there that Drop Out With The Barracudas would forevermore be one of my all-time favorite albums.

But we're not even done yet! "Surfers Are Back" gives us another dose of seemingly unironic fun in the sun, "Don't Let Go" offers more quiet desperation, and "On The Strip" finds us cruising once again. "California Lament" is the cruelest track of all, spinning the tale of a California dreamer finally making his long-wished-for trip to the promised land of the Golden State, only to find that a terrorist's bomb detonates his plane just before landing. Now I'll never see California....

After all that, "I Wish It Could Be 1965 Again" brings it all together, lamenting the sad state of pop music at the dawn of the Reagan era while celebrating in boundless exultation the divine inspiration of rock 'n' roll and surf 'n' soul from the peerless year of 1965. Shindig, Hullabaloo, Bandstand, and Where The Action Is, too! This is a powerful, triumphant expression of everything that was great about AM radio in the mid '60s, a track that gooses the flesh and prompts the raising of fists, the bopping of limbs, and the swelling, giddy satisfaction of pure pop incarnate. Down Side and Up Side combined, Drop Out With The Barracudas hits what deserves hitting, pummels what merits pummeling, and vibrates right off the turntable into memory eternal,

Nothing The Barracudas ever did after that, through varying line-ups that even included Chris Wilson of The Flamin' Groovies, could ever quite match the innate appeal of the group's debut. They're all still worth seeking out, mind you, but you can't top perfection. 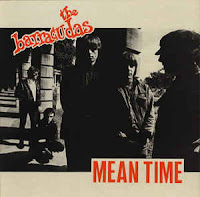 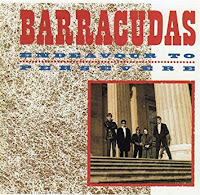 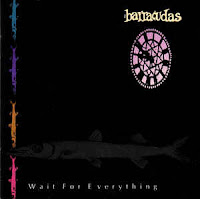 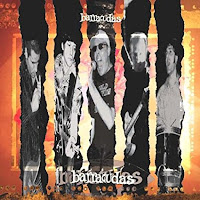 The original UK version of Drop Out With The Barracudas omits the fabulous "Surfers Are Back" in favor of a lesser track called "Campus Tramp." There are versions that switch the order of the Down Side and Up Side--to the album's detriment, I think. The US track line-up is unerring, unsurpassable. For me, it was absolutely love at first spin. 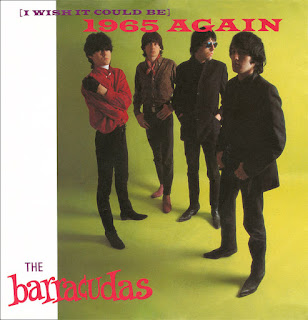 You can support this blog by becoming a patron on Patreon: Fund me, baby!
Posted by Carl Cafarelli at 9:49 AM