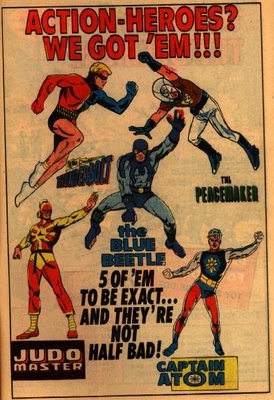 Although DC and Marvel tend to dominate any discussion of mainstream comics today, there has never been a time when there were only two successful comics publishers. DC and Marvel (and Archie Comics, too) have been in this business since before World War II; most of their Golden Age competition--Quality Comics, Lev Gleason, Fiction House, Hillman, Fox, et al.--had deserted the funny-book racks by the time Bill Haley and his Comets began to rock around the clock. Fawcett Comics, publisher of the original Captain Marvel, also threw in the towel (or cape) in 1954, but returned as the purveyor of  Dennis the Menace comics. ACG stayed in the game until the mid-'60s. Dell Comics, which was likely the best-selling American comics publisher of all time (due to licensed properties ranging from Mickey Mouse to Tarzan), hung on until the early '70s, though it lost most of its licenses along the way.  Many subsequent publishers have come and gone--Gold Key, Tower, Warren, Atlas, Eclipse, First, Comico, etc.--and still many more continue today. My weekly trips to Comix Zone in North Syracuse will often include new books from Dark Horse, Dynamite, AfterShock, and IDW, along with my steady supply of DCs, Marvels, and Archies.

As a kid in the '60s (and still today), I dug super-hero comics. I gravitated toward DC and Marvel, but I would also grab the occasional book from Mighty Comics (Archie's short-lived super-hero line, home of The Mighty Crusaders) and Gold Key (Magnus, Robot Fighter and Dr. Solar: Man Of The Atom). And, somewhere along the way, I stumbled across the Charlton Comics line. 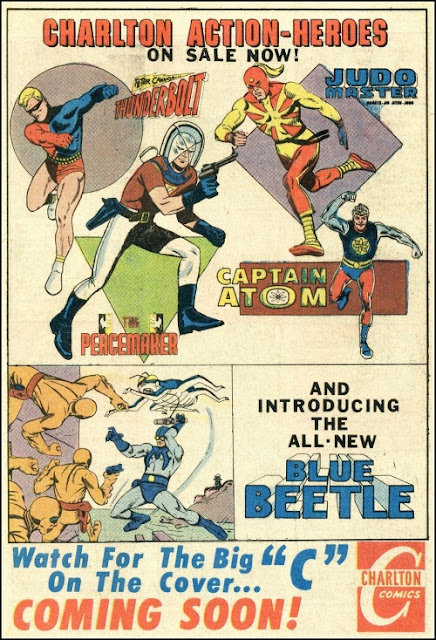 Charlton had also started in the '40s, and Charlton stubbornly and tenaciously remained in the four-color field until the '80s. Based in Derby, Connecticut, Charlton Publishing's offerings were manufactured entirely in-house, and the Charlton Comics line was a low-rent line-up that existed for the sole purpose of keeping the printing press a-rollin'; churning out product was cheaper than shutting down the press and firing it back up.

"Low-rent" isn't meant as a criticism, really, though Charlton titles did indeed display ample evidence of being produced on a tight budget. But there was often something quirky and unique about some of Charlton's output, and I consider myself a Charlton fan. 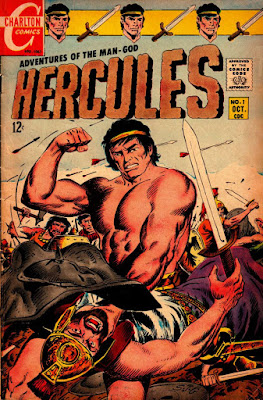 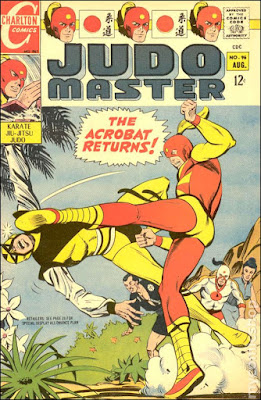 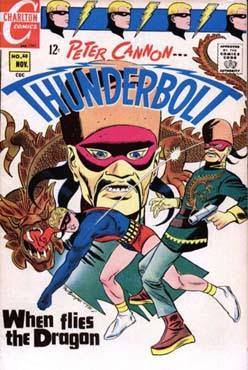 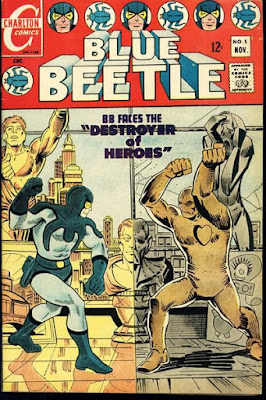 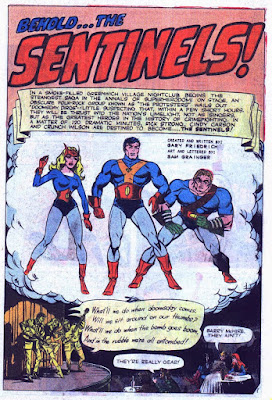 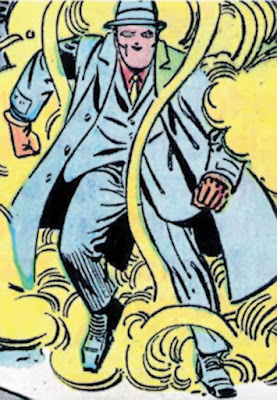 I've had difficulty trying to reconstruct where I first encountered Charlton Comics. I have an imprecise recollection of seeing Charlton's Hercules book somewhere, but my specific interest was Charlton's Action-Heroes line, edited by Dick Giordano: I recall picking up an issue of Judo Master at Sweethearts Corner in North Syracuse; I remember Peter Cannon...Thunderbolt (and its back-up strip, the bickering superhero team The Sentinels); I don't think I caught any Captain Atom or The Peacemaker until years later, but I clearly remember a coverless copy of Blue Beetle # 5, an extravaganza by writer-artist Steve Ditko, with Blue Beetle joining forces with The Question in a tale seemingly (but not actually) written by Ayn Rand. If I were to ever write the Justice League of America/Justice Society of America/Charlton Action Heroes crossover of my dreams,"Our Man" from Blue Beetle # 5 would play a significant role. 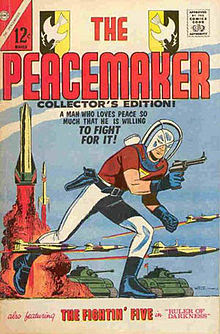 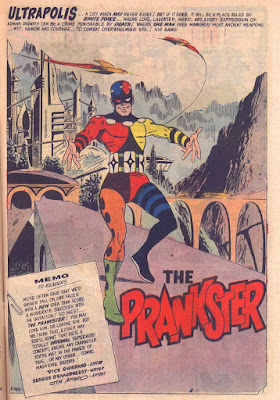 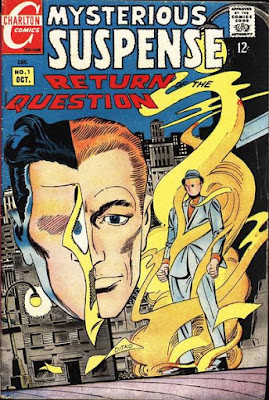 While it's not terribly likely that I'll ever write such a thing, it would be perfectly plausible for someone else to do it; DC Comics purchased the rights to most of the Action-Heroes line in the '80s, as a gift to one Dick Giordano, who was running DC at the time. Giordano had left Charlton in the late '60s, initially to work as an editor at DC (including some really, really top-notch comics in Aquaman and The Teen Titans, and a terrific Western book called Bat Lash), later as an acclaimed freelance artist, and eventually as DC's capo di tutti capi. A few Charlton writers and artists followed Giordano to DC in 1968, including Jim Aparo, Steve Skeates, and Denny O'Neil. DC hired Giordano on the recommendation of another Charlton talent, the above-mentioned Steve Ditko. 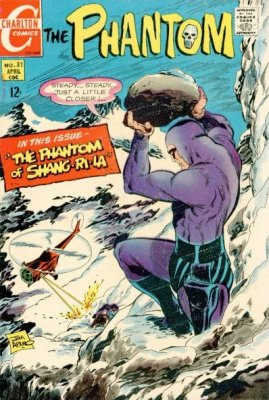 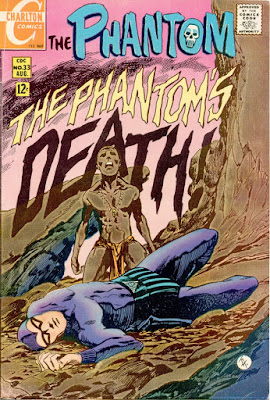 Dick Giordano's exodus from Charlton roughly coincided with the end of the Action-Heroes line. But my discovery of Charlton Comics was just beginning; Charlton picked up the rights to Lee Falk's newspaper hero The Phantom, which featured some stunning Jim Aparo artwork in the early '70s, and I bought that title as often as I could. Licensed properties became Charlton's primary stock in trade, though I generally didn't buy any of them other than The Phantom. I do remember a Charlton issue of The Partridge Family that reminisced about old radio shows like The Lone Ranger, I Love A Mystery, and Fibber McGee And Molly; it was, incongruously, the first time I ever saw a picture of The Shadow, a character that would become very important to me in the '70s.


My appreciation of Charlton manifested in back issues, as I retroactively discovered the beauty, the splendor, the wonder of my hair...er, of Blue Beetle, The Peacemaker, Nightshade, Judo Master, Captain Atom, The Prankster, The Sentinels, and Peter Cannon, Thunderbolt. I'm still waiting to read Charlton's acclaimed science-fiction Western hero, Wander. Charlton published one more action hero in the '70s, the great E-Man by Nicola Cuti and Joe Staton, but that's a discussion for another day. The spirit of Charlton lives on in Charlton Neo, current publisher of fine titles like The Charlton Arrow, and there's even a Charlton documentary film in the works. Not bad for a low-rent publisher that once soft-pedaled its heroes with the tag line, "Action-heroes? We Got 'Em!!!...And they're not half-bad!" No, not bad at all. 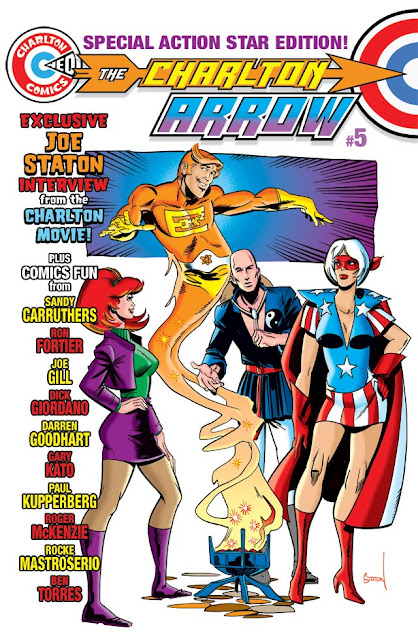