THE EVERLASTING FIRST: The Flamin' Groovies 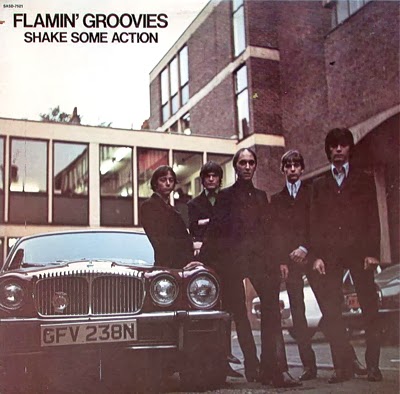 As a college freshman in the Fall of 1977, I had my ear practically stapled to Brockport's student-run radio station WBSU, a closed-circuit AM signal heard only on campus. WBSU was where I first heard Blondie, Television, The Dictators, The Ramones, all based on my obsessive and insistent requests to finally hear more of this punk rock stuff I'd been reading about in (again!) Phonograph Record Magazine. I was also requesting The Monkees--WBSU's library included a copy of the group's then-rare 1970 LP, Changes, so my (often-futile) pleas for WBSU jocks to play something from Changes were my only opportunity to hear Davy Jones warble "I Never Thought It Peculiar." Okay, you may think it's peculiar, but I never did.

So yeah, I listened to WBSU all the time. And I remember one particularly revelatory afternoon of communing with BSU, as I heard a couple of terrific oldies that I didn't know at the time: "Five O'Clock World" by The Vogues and "Lies" by The Knickerbockers. Both of these tracks have been on my All-Time Top Pop list ever since (and I immediately wrote in my journal that The Knickerbockers "sound more like The Beatles than The Beatles do!"). I believe the DJ also played my request for "Any Way You Want It" by The Dave Clark Five. To top it off, I heard two contemporary groups I'd neither heard nor heard of before, both performing '60s covers: "The Batman Theme" by The Jam, and "Misery" by The Flamin' Groovies.

An answer to that question wasn't immediately forthcoming. I'd never read anything about them, nor had I seen (or noticed, at least) any of their records at the stores. And, even if I'd seen a Groovies LP on the record racks, as a poor, poor college frosh, I couldn't afford to just buy a Flamin' Groovies album on a whim. I needed more evidence. And that evidence was tough to come by. 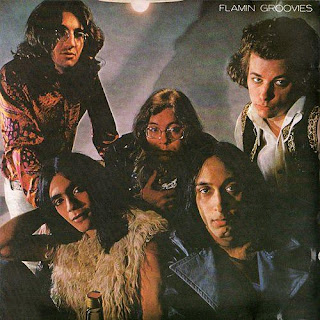 In retrospect, you would think I must have started requesting more Groovies music from the beleaguered WBSU jocks I was already pestering anyway, but I don't think I did (or, if I did, I wasn't successful). I mentioned The Flamin' Groovies to my friend Fred. Fred had a decent-sized LP collection, and he came up with a copy of a Flamin' Groovies album called Flamingo. Flamingo appeared to be an older record--so much for my presumption that the Groovies were a brand-new group--and it didn't include "Misery." For some forgotten reason, I didn't borrow Fred's copy of Flamingo, and my obviously-casual Groovies quest went on its obviously casual way. 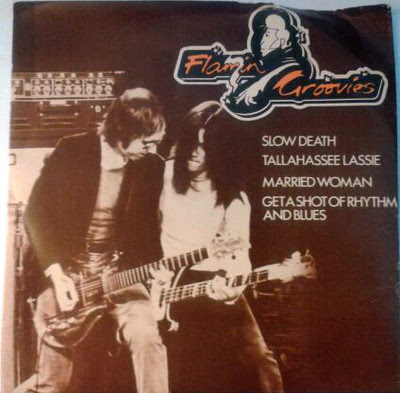 I did see a Flamin' Groovies record at The Record Grove in Brockport: an import EP with "Slow Death,""Tallahassee Lassie,""Married Woman," and "Get A Shot Of Rhythm And Blues." An EP--even an import EP--was less of a financial risk than springin' for a whole album, but...no. Didn't take the plunge. Not yet.

So The Flamin' Groovies got backburnered. It would be well over a year before I paid any attention to this unsettled matter of The Flamin' Groovies' music. By the spring of 1979, I was dating a girl named Brenda; I think I've mentioned her a few times on the blog, since we've been, y'know, married since 1984. Brenda's pal Christie was seeing a boy named Paul, and it turned out this Paul fellow--a WBSU jock!--shared my fondness of punk and new wave. We all hit it off rather well. In random conversations about this music, Paul mentioned a compilation album he had, an import sampler LP called New Wave. He offered to lend it to me, and I accepted. 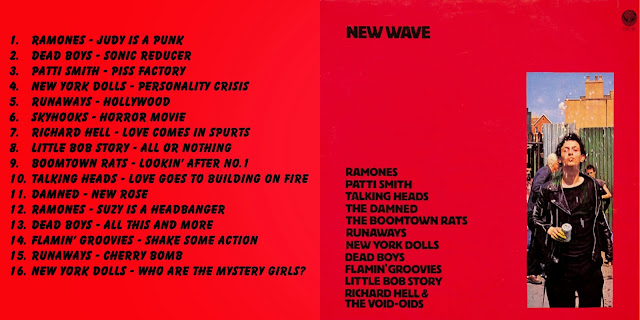 We've already discussed this New Wave collection in our Everlasting First entries on The Damned and The Dead Boys, and it will be popping up yet again before our alphabet is spent. In addition to those two acts, New Wave included a few tracks I already knew (by The Ramones, The Runaways, and Richard Hell & the Void-Oids), a great Talking Heads track I didn't know, and a few other things that were new to me, too.  And, of course, New Wave included a Flamin' Groovies song called "Shake Some Action."

The song was just...hypnotic. There were so many little elements combining and clashing within that track, with bits of The Byrds and Phil Spector, a brooding, booming bass, guitars that seemed to snarl and jangle at the same time, punk swagger, pop yearning, and an insistent instrumental hook that grabbed me and whispered silkily in my ear, You're with us now, son. It was a recipe for cacophony, a surefire roadmap to a sonic mess...except that it wasn't. It was precise. It was perfect. And I swear, in that moment, I knew it was The Greatest Record Ever Made.

Okay. Now I was willing to spend money on Flamin' Groovies records! I remembered that I had seen a copy of the Groovies' Shake Some Action LP at a fantastic little record store in Joplin, Missouri over Christmas break--wish I'd heard that damned song a few months earlier! But by now, Shake Some Action seemed to have vanished from retail shelves. 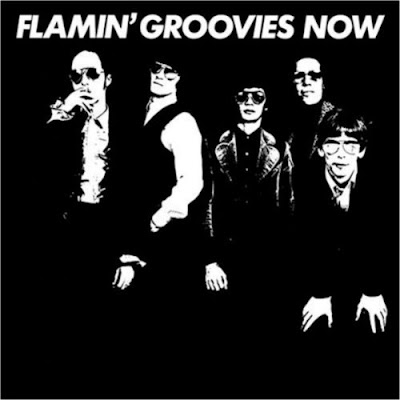 But The Flamin' Groovies had a new album out: Flamin' Groovies Now. I bought a promo copy of that LP for cheap, and it was one of my go-to records for a few months thereafter. I was particularly taken with a track called "Don't Put Me On," if only because it directly copied some elements from the elusive "Shake Some Action." That summer of '79, I had a job at Hofmann Sausage Company, and I would listen to that track (often more than once) every evening when I got home from work, buzzed and hungry, eating my hot dogs and listening to my power pop.

Brenda stayed in Brockport that summer, and we alternated weekend visits, with her coming to Syracuse one weekend and me grabbing the Greyhound to Brockport on the next weekend. On one of those Brockport trips, I found a copy of the Shake Some Action LP in the cutout bin at Main Street Records. SCORE!!! I couldn't buy it fast enough. And that album included the Groovies' cover of "Misery," bringing me full circle to the beginning of my interest in The Flamin' Groovies. 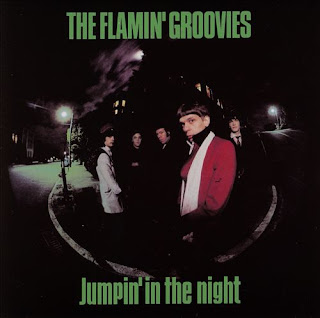 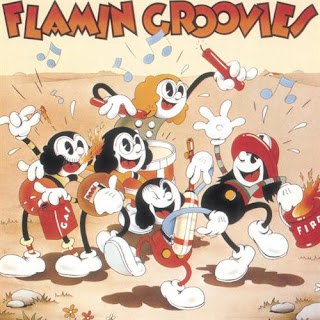 Over a short period of time, Shake Some Action grew to become one of my all-time favorite albums, and the Groovies became one of my all-time favorite bands. It took me a while, but I eventually acquired all of their albums. I learned that the pre-Shake Some Action Groovies was, in many ways, a different band than the Groovies I knew, even though they shared some personnel. The Flamin' Groovies of Supersnazz, Flamingo, and Teenage Head were fronted by the great Roy Loney, and were generally rootsier and less Mersey-smacked; my familiar, (slightly) latter-day Groovies were fronted by the also-great Chris Wilson, and those albums--Shake Some Action, Now, and Jumpin' In The Night--were consciously evocative of the mid-'60s British Invasion and American reaction. I loved both, but I'd be lyin' if I didn't admit my special affection for the Fabmania pop of the Wilson records. The constants in all Groovies incarnations were guitarist Cyril Jordan and bassist George Alexander; Cyril and George are still Groovies today, and Chris Wilson has even rejoined, too. I wish they'd come to Syracuse! The Groovies released a new album, Fantastic Plastic, in 2017, and toured with ex-pat Syracusan Chris von Sneidern subbing for George Alexander on bass. (Our pal CVS actually completed his fab This Is Rock 'n' Roll Radio, Volume 4 track "Insomniac Summer" just before headin' out on the road as a deputy Groovie.)

So my Groovies fandom began with a spin of "Misery" on WBSU, and exploded when I heard "Shake Some Action" on a record lent to me by a new friend named Paul. Back in that spring of '79, Paul asked me if I wanted to be his roommate for senior year, and I agreed. We became great pals for a while, and the friendship continued after graduation. It ended abruptly in the early '80s. It goes that way sometimes. Regrets? I've had a few. More than a few, really. It was groovy while it lasted.

Sometimes in my dreams, we still talk to each other
Although in real life I know we're done with one another
I don't think I'd want you to return
I'd just feel better if I could learn
What became of you
Because I remember you 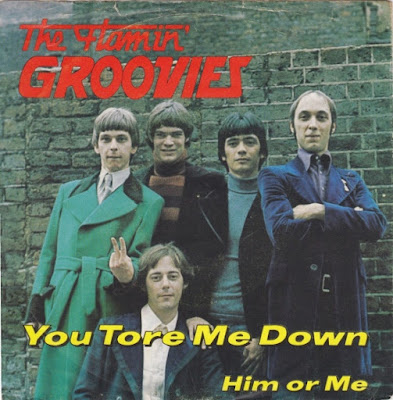 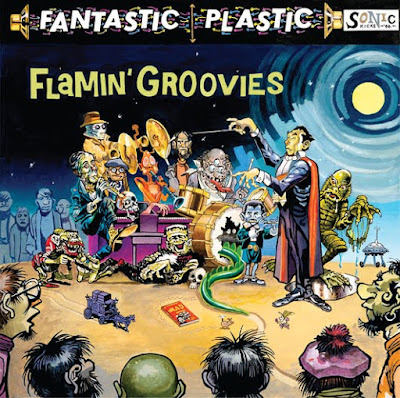 PS: I interviewed Cyril Jordan for Goldmine in 1992. One of these days I'll have to dig that outta the archives, transcribe it (ugh!), and post it here. 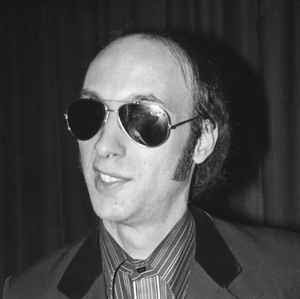