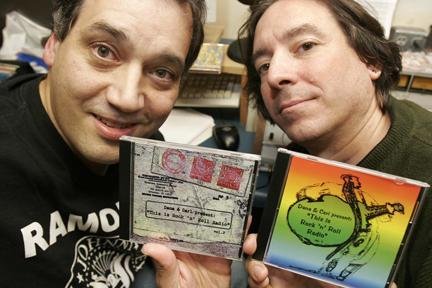 This week's edition of 10 Songs (retitled 18 Songs for this week only), draws exclusively from the playlist for This Is Rock 'n' Roll Radio # 1132.

IN DEED: Don't Kill The Babe 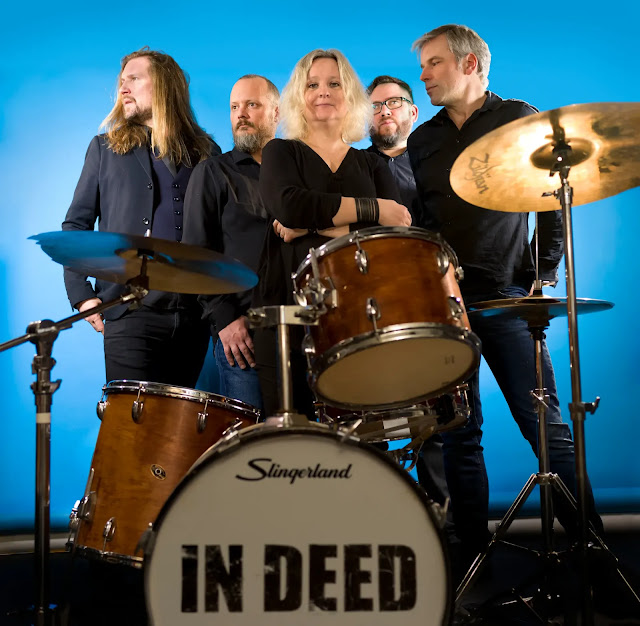 I curse the many years we didn't know about Uppsala, Sweden's phenomenal pop combo In Deed. So much wasted time. Here's something I wrote about In Deed in 2019:

"There's always something out there. Something new. It might not be brand new to someone else, but any record you ain't heard yet is a new record. Buddy Holly was new to me in 1973, when I was 13. The Velvet Underground was new to me in the early '80s. The path of discovery and celebration doesn't end, ever. Old stuff. New stuff. Old stuff that's new to you.

"In 2019, I discovered another new favorite band: In Deed, from Uppsala, Sweden. They're not new--their debut album At 4000 Meters was released in 2001--but I'd never heard them before, never heard of them before. Rex Broome and Christina Bulbenko decided they wanted their visionary U. S. record label Big Stir to bring the sound of In Deed to American ears. Big Stir made a digital download of the outta-print At 4000 Meters available to DJs to introduce us all to the now sound of In Deed, arranged for the first-ever CD release of the band's more recent second album Everest...

"...Where would we be without people who keep the faith, people who spread the word? We used to be able to rely on the radio, on the rock press, on friends, on fans. But see, that hasn't changed; we still rely on all of these resources to bring us new sounds. Some of the details have evolved; where once we had Top 40 and/or alternative radio, Phonograph Record Magazine and Trouser Press, and a cousin with Deep Purple cassettes, now we have non-commercial and internet radio, blogs, and...well, we still have our friends, don't we? Friends like Rex and Christina introduced us to In Deed. Thank you, friends."

And In Deed is indeed still poppin', still delighting with a brand new Big Stir single, "Don't Kill The Babe." All good things to those who wait. We're told there's more to come. As, indeed, there should be.

POP CO-OP: Always In The Past 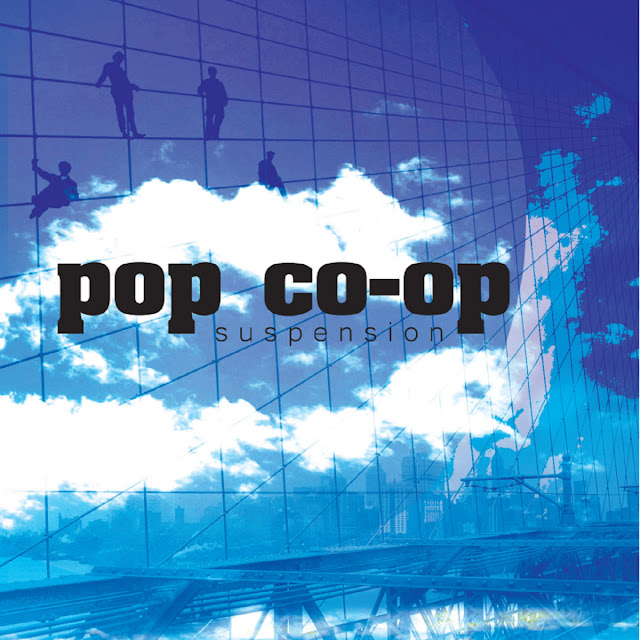 For the past four weeks, we were granted the opportunity to debut four exclusive tracks from Suspension, the then-forthcoming new album from the beauty, the splendor, the wonder of Pop Co-Op. Now? The new Pop Co-Op album belongs to the world! Frankly, I think Suspension is too good for some people, but if you read this blog and/or listen to this radio show, Pop Co-Op is for you.

And that's the thing: pop music is for the people. We were honored to have exclusives to premiere these fine tunes, but we're more interested in everyone hearing them, everyone playing them, everywhere. Especially on talk radio; talk radio should stop being talk radio and play Pop Co-Op instead. For our unsanctioned (but unstoppable) fifth week of pummeling on behalf of Suspension, we programmed "Always In The Past," a lovely song written by Steve Stoeckel, dedicated to the late Chris Garges, Steve's friend and former Spongetones bandmate. Music heals. Music lifts us and carries us. We don't own it. It belongs to us all.

(Oh, and you oughtta be among those in material possession of a copy of Suspension: BUY IT!!!

THE KINKS: The Hard Way 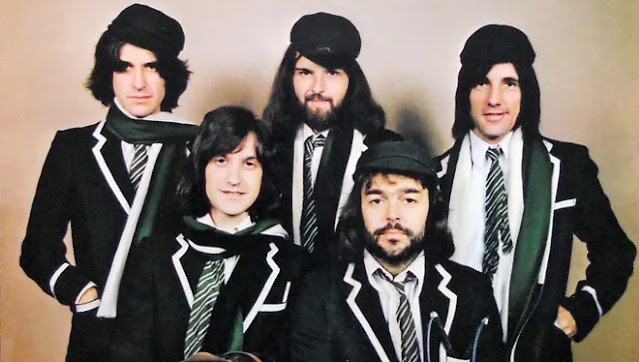 Our designated House Band the Kinks have been MIA as often as not in recent playlists. The nature of boppin' out the selections for each week's show manifests in the ongoing balance of A) yeah, we're likely to play our favorites, and B) we're just as likely to skip playing our favorites because, y'know, it's only a three hour show. The Kinks return to TIRnRR this week with a spin of a suitably aggressive track from their underrated Schoolboys In Disgrace album. 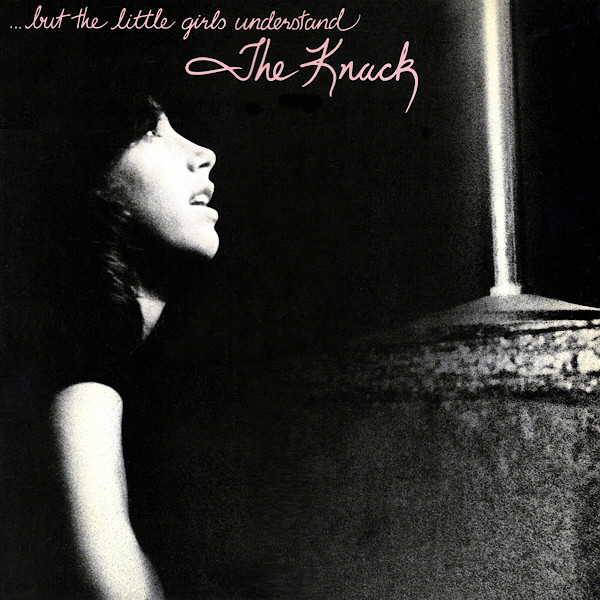 Oddly enough, when the Knack covered "The Hard Way" for their 1980 album ...But The Little Girls Understand, I recall reading a review that chastised the Knackers for the line "I've got to be cruel to be kind," implying that the phrase belonged to Nick Lowe. It's a common phrase, so I'm not accusing Nick the Knife of ripping his 1978 hit "Cruel To Be Kind" from the Kinks' 1975 "The Hard Way," but nor is it fair to knock the Knack in this regard. (And the Knack did a fine cover of "The Hard Way," by the way, but ya can't beat the House Band. Whether we play them each week or not.)

The SOMETHING ELSE! Set: 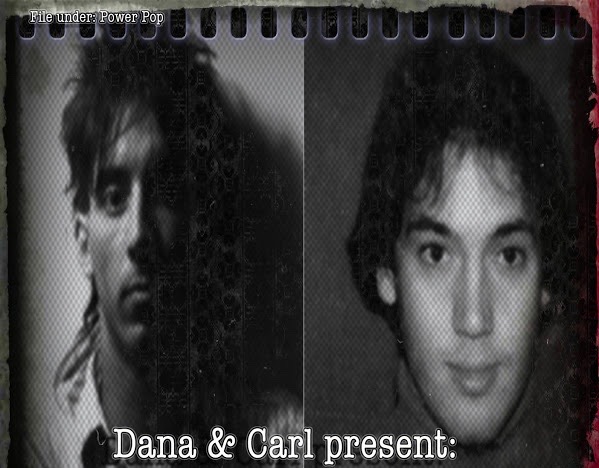 The secret's out. The clandestine Dana & Carl project previously codenamed Something Else! is in reality our new compilation album This Is Rock 'n' Roll Radio, Volume 5. The CD is due soon from the good folks at Kool Kat Musik, and the above sequence shows you the album's first nine tracks in order. These will be joined on TIRnRR Volume 5 by more superswell offerings from In Deed, Gary Frenay, the Villas, Justine and the Unclean, Kid Gulliver, Kingmixer, Ballzy Tomorrow (with Robbie Rist), Kelley Ryan, Arielle Eden, the Jangle Band, Eytan Mirsky, and a couple of other stellar stalwarts we can't reveal just yet. BUT! We hope to have this rockin' pop treasure out by Septemberish, so keep watching the skies. This is gonna be something else.
MIKE BROWNING: A Girl From Somewhere 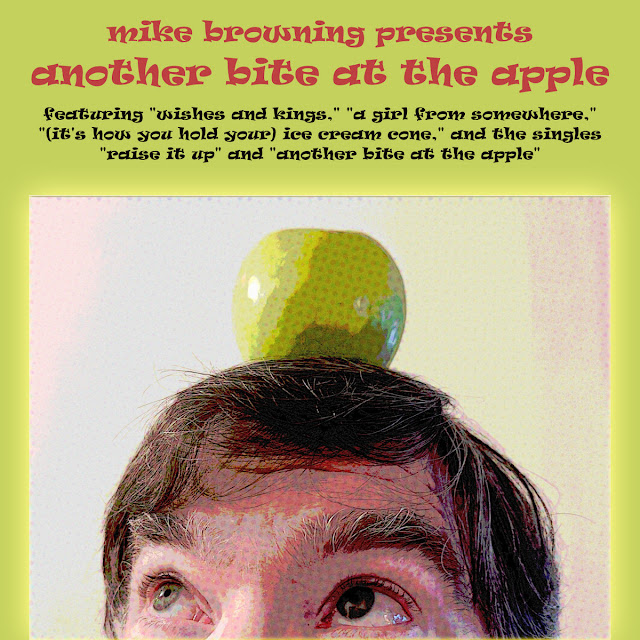 Our pal and reliable pop guy Mike Browning has just released his new album Another Bite At The Apple. We've heard it, it's groovy, and you'll want it if you have any vague hope of retaining status as someone cool. We've played a couple of its tracks already, and we follow up now with the latest, "A Girl From Somewhere." Hey, I think Micky Dolenz and Michael Nesmith may have known a chick from that same locale!
SETH TIMBS: Young Lovers 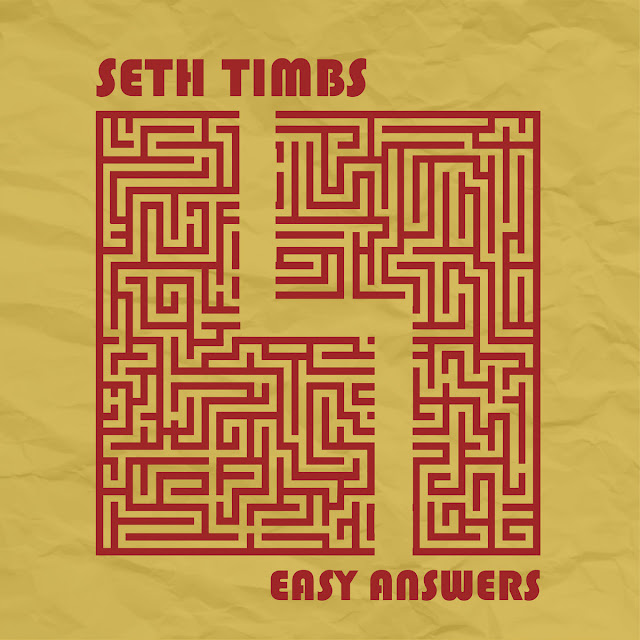 Well, this is really nice. Smooth, luxurious, and ready for the radio, "Young Lovers" is a track from Easy Answers, the latest album from Nashville's Seth Timbs. It's a Kool Kat Musik release, which makes Seth our label mate. Howdy, label mate! Go team Kool Kat!
THE FLASHCUBES WITH THE SPONGETONES: Have You Ever Been Torn Apart? 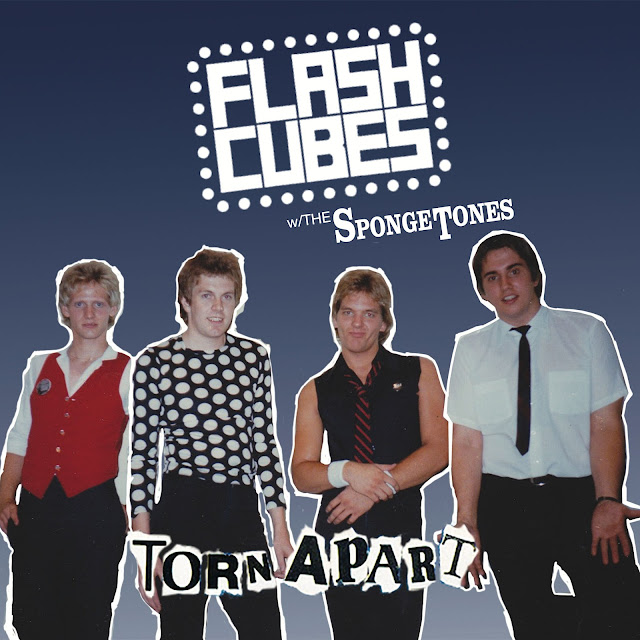 Last Friday night, I went out to see Gary Frenay and Arty Lenin perform a low-key duo gig. I've been a diehard Gary and Arty fan for coming up on 45 years, ever since my first Flashcubes show on January 28th, 1978. I knew it would be mostly a covers gig (though we were treated to a performance of Gary's own should-be-classic tune "Make Something Happen"), but I also knew Gary and Arty do great covers gigs. From the Beatles to Michael Nesmith and the First National Band, Rick Nelson and the Everly Brothers through the Flamin' Groovies and Johnny Cash, a splendid time was guaranteed for all.
And maybe I wasn't entirely surprised that Gary and Arty played "Have You Ever Been Torn Apart?," their current single as the combined forces of the Flashcubes with the Spongetones. I didn't necessarily expect it either. Still, ya gotta hawk the single, right? I'm so glad I was able to witness it. And there's much, much more yet to expect from the Flashcubes.
THE 5TH DIMENSION: Carpet Man 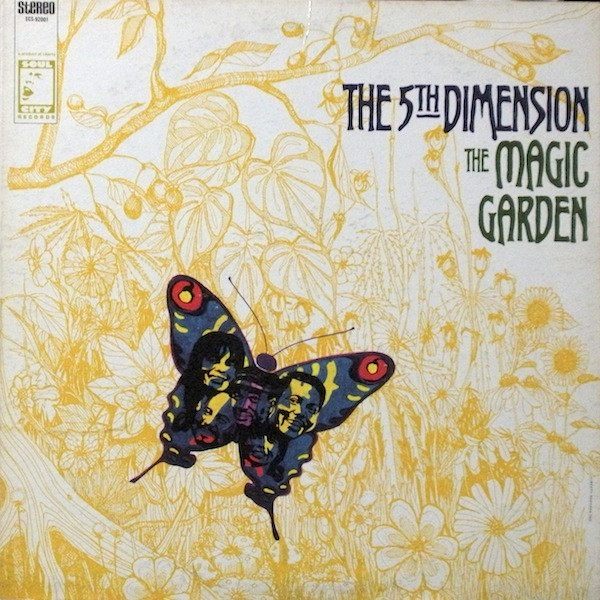 The 5th Dimension recorded a lot of invigorating, timeless material, and had a great deal of deserved chart and radio success. "Carpet Man" was only a relatively minor (# 29) hit in 1968; it should have been Top 10 at least, and even that's selling it short. Fantastic, fantastic track, the equal of their signature "Age Of Aquarius/Let The Sun Shine In (The Flesh Failures)," and even better than anything else in the group's catalog o' superlative stuff. That is (to quote the Velvelettes) really sayin' something. True nonetheless.
THE RARE BREED: Beg, Borrow And Steal 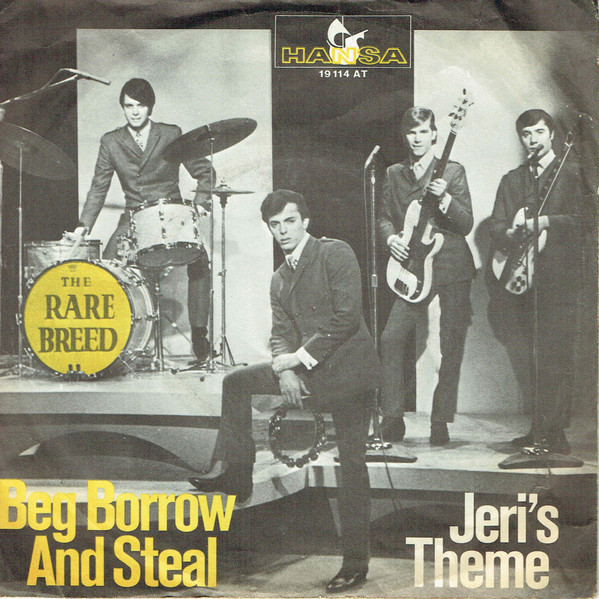 The Greatest Record Ever Made!
FREDA PAYNE: Band Of Gold 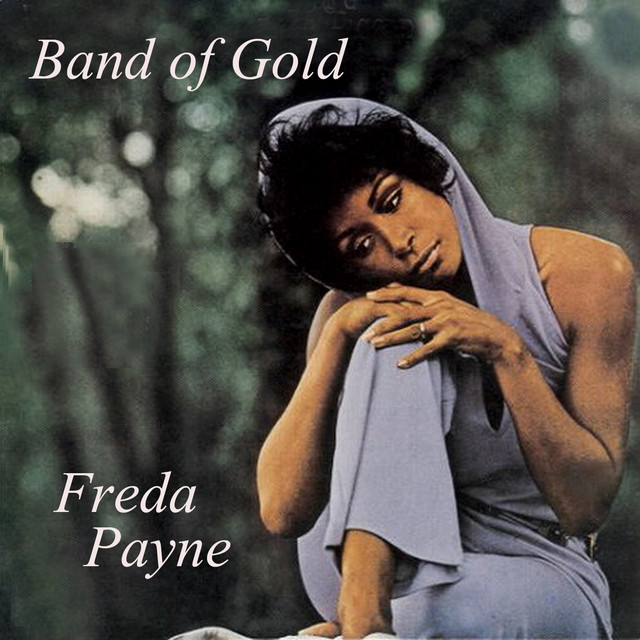 Hey, speaking of my long-threatened book The Greatest Record Ever Made! (Volume 1)--an idle threat, maybe, but dedicated to the notion that an infinite number of tracks can each be THE greatest record ever made, as long as they take turns--here's an excerpt from that book's chapter celebrating "Band Of Gold" by Freda Payne:
"My wife Brenda also grew up listening to the radio. Jesus, didn't everyone our age do that? As a little girl originally from Brooklyn, living from school-age to young adulthood on Staten Island in a government housing project--an environment dramatically more racially- and culturally-diverse than my vanilla childhood surroundings--she was immersed in a lot more black music than this suburban kid was exposed to during the same time frame.
"But Top 40 radio was an equal-opportunity rush. I heard Motown, just like she did. I heard the Honey Cone, Isaac Hayes, the Spinners, the Stylistics, the O'Jays, Rufus, Curtis Mayfield, and more, all pop music, offered for interracial, interfaith radio worship along with the Partridge Family, Three Dog Night, the Carpenters, and John Denver. It was the soundtrack of the '70s, in the city and the suburbs alike. Brenda heard more of it, and she heard it more often; but the soulful sounds certainly reached my ears sometimes, too.

"At the end of 1970, when Brenda was eleven years old, she listened to the year-end countdown on New York's WABC, the home of iconic NYC DJ Cousin Brucie. Cousin Brooooooooooocieeee! As she listened to the radio's proclamations that New Year's Eve, as '70 became '71, Brenda knew exactly which great record would be anointed # 1 for the Year Of Our Lord Nineteen Hundred And Seventy. And she was right. Number ONE! ONE! ONE! ONE! ONE! Freda Payne, "Band Of Gold." Brenda's belief was validated. And the hits just kept on coming...."
We have more hits to play. Keep 'em coming. And turn up the radio. 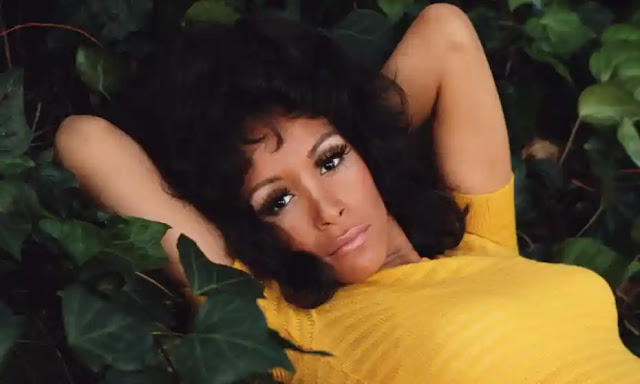