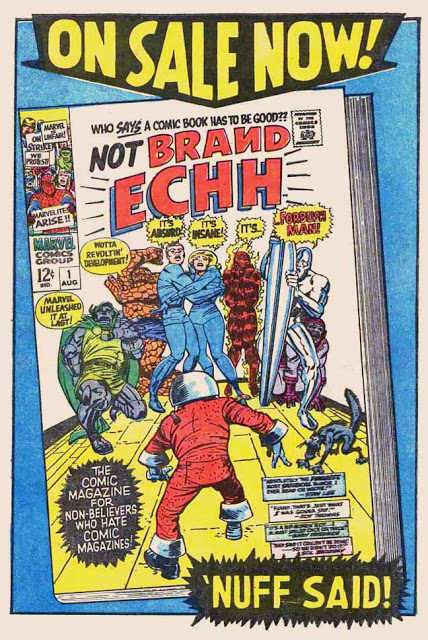 Each week, the pop culture website Pop-A-Looza shares some posts from my vast 'n' captivating Boppin' (Like The Hip Folks Do) archives. The latest shared post is my look back at a 1960s Marvel Comics superhero comedy title called Not Brand Echh.

When I was a kid in the '60s, comic books like Not Brand Echh and DC's The Inferior Five were essential components in the development of my sense of humor. The same could be said of magazines like Mad and CARtoons (both of which were comic books trying to assimilate), of newspaper comic strips, and of TV sitcoms, Bugs Bunny cartoons, and Three Stooges shorts. As I theoretically grew into adolescence and teendom in the '70s, these early influences never left me. They were joined by my embrace and appreciation of The Marx Brothers, Charlie Chaplin, Lenny Bruce, Woody Allen, Johnny Carson, the film What's Up, Doc?, Mel Brooks, a zillion stand-up comics on TV, reprints of fantastic Uncle Scrooge and Donald Duck comic book stories by Carl Barks, and renewed enthusiasm for two things I'd enjoyed in the previous decade: The Monkees on TV, and The Beatles in A Hard Day's Night. One-liners, gags, banter, wit, sarcasm, slapstick, farce, puns, parody, and (one presumes) the occasional fart joke. Laugh! Laugh, already!

What did a sense of humor ever get me? Well, I'd be lying if I said it never got me into trouble, or even into fistfights (wherein I usually got my ass kicked). But as I tried to express myself in some kind of creative fashion, the grand pursuit of titters and guffaws occasionally paid off, at least in modest terms. In fourth grade, I didn't have a part in the class play, but I ad-libbed a comic role from the sidelines during rehearsals; the positive reaction from my peers was sufficient for the teachers to insert my improv character into the performance. Acting!

In high school, I started writing humor pieces for the school's literary magazine. I remember a classmate approaching me after reading one of my published laugh-riots and saying, "Carl, you're a really funny writer. Um...how come you're not funny in real life?" Ouch...but accurate. My attempts at verbal humor generally yielded rolled eyes and scornful glances; on paper, with all pratfalls premeditated, I was a king of comedy.

And I got a little better at the in-person bit. Not better enough to pursue any notion of formal performance--I was absolutely never that good--but enough to occasionally be amusing in casual conversation. Ya gotta be quick! That was my credo. A fast-paced approach to banter can make things seem funnier than they are. And, over time, the practice of learning to think fast improves your material.

In college, I remember one day when I could see a girl's interest in me grow as my quick bam-bam-bam string of nonsense made her giggle and insist that I should be a stand-up comedian. On an earlier occasion, a different girl incongruously found my impression of Jerry Lewis as a punch-drunk boxer so hilarious that it apparently made me physically irresistible. I guess you could consider that the first time I was paid for being funny. Sort of.

From about the age of 13 or so, I knew I wanted to be a writer. Most of my attempts to get paid for writing were of a more somber--or at least non-comedic--nature, and none of them sold. I began some successful freelancing as a writer of nonfiction in 1984. In 2019, I made my first-ever fiction sale, and it was a full-on comedy short story called "Guitars Vs. Rayguns." I'm toying with the idea of doing more.

Today's discussion wanders far afield from our original topic of a willfully silly Marvel comic book called Not Brand Echh. But it's important to be aware of our influences, of the effect the things we enjoy has upon the formation of who we think we want to be. As a kid, I wanted to be accepted. I wanted to create something that would engage my peers and the public at large. The comic books I read were part of that. The story of my love of Not Brand Echh provides the latest Boppin' Pop-A-Looza. 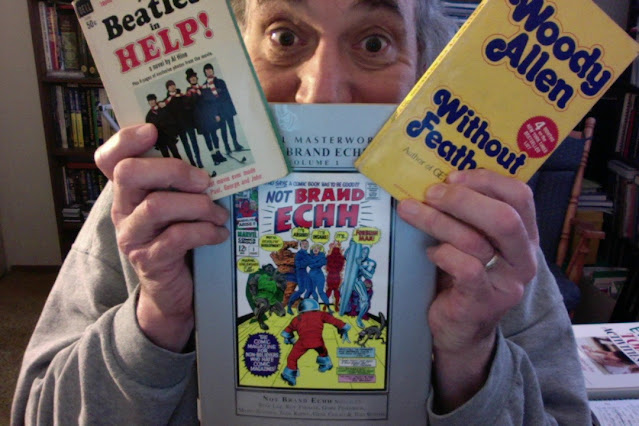